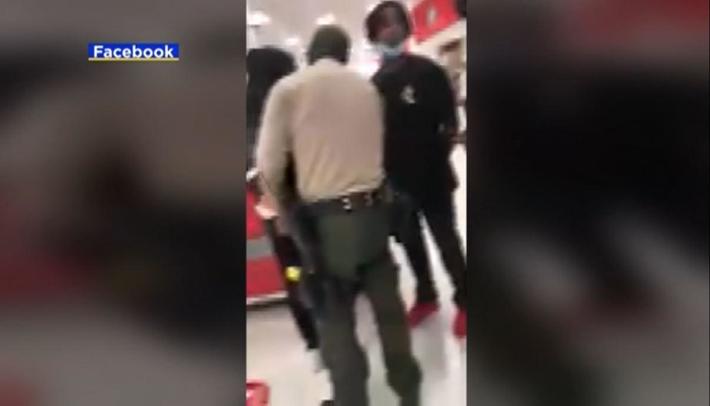 Cell phone video of three Black teenagers — ages 16 and 17 — being detained by Los Angeles County sheriff’s deputies inside of a target in Southern California has gone viral and prompted an apology from the retail giant.

The incident happened at the Target in Westlake Village. Video shows deputies holding the teens’ arms behind their backs and pushing them up against a checkout counter.

“I was thinking I was going to die that night,” 17-year-old Malik Aaron told KCAL-9. “I already had that mindset that they were either going to kill me or one of my friends.”

Aaron said he and four friends left church on Sunday and went to the retail giant to buy snacks. The teens said once they were inside, they saw a separate group of Black men steal iPhones from a display case and run out of the store. That’s when they said a Target staff member started following them around the store.

“He said, ‘Oh, do you guys need help with anything,’ and we said, ‘No. We are in the right aisle,’” Aaron said. “And he said, ‘Well, I can’t have you guys walking around in the store,’ and, you know, that kind of just made me, like, really uncomfortable, and that’s when I told everyone, ‘Let’s just forget about the snacks and just leave.’”

But when the teens approached the exit, they said Target employees had blocked it with shopping carts.

“They wouldn’t let us leave at all, but they were letting other people leave,” Aaron said.

That’s when the teens said deputies arrived and one of their friends starting recording the incident on their cellphone. Aaron said one of the deputies slapped the phone out of his hand when he tried to start recording the situation.

“I can show you right now,” he said, holding up a phone with a broken screen. “This is what my phone looks like.”

The teens were taken out of the store in handcuffs.

“He threw me in the cop car and told me to shut the eff up and slammed the door on my feet,” Aaron said.

The teens were eventually released. No arrests were made and Aaron’s mother, La Shaun, posted the cellphone video to her Facebook page.

“I’m sad,” she said. “I felt like he had to go through that by himself, and then to not even hear from the police about this, not even, ‘I’m sorry,’ no recognition of anything.”

Target released a statement apologizing for the incident and said it had fired the employee involved:

“We want all Target guests to feel welcome and respected whenever they shop in our stores, we’re deeply sorry for what happened and we’ve terminated the security team member who was involved. What happened to these guests is in direct opposition to the inclusive experience we want all our guests to have. Our security team member took action and stopped these guests in violation of Target’s security procedures. We expect our team members to follow Target’s security processes and treat all guests with respect. Additionally, all leaders at the store will retake mandatory security and racial bias training. Finally, and most importantly, we’re reaching out to all of the guests who were involved to offer a personal apology.

Two of the teens involved, Aaron and 16-year-old Greg Kim, are youth sports coaches and worry that their reputations will be damaged.

The Los Angeles County Sheriff’s Department said it was aware of the incident and it was under review.

An attorney for the families said she would be filing a lawsuit alleging civil rights violations.

Comment by Lizzette on January 23, 2021 at 5:24pm
Hopefully these young men will successfully be awarded their rightful justic. SMDH

Comment by Lori Graham on January 22, 2021 at 5:15pm
Terrible to accused these young because They are Black sue the pants off Target