Black student is raising money for university: 'Someone like me, I’m not supposed to be in Oxford'

By his own admission, Roy Potter isn’t the typical Oxford student: he’s black, he grew up on one of the poorest estates in London, and he comes from a single parent family.

And yet Roy Potter as he goes by on social media (Roy Celaire is his real name) has been offered a place at the University of Oxford, beating out thousands of applicants who were privately educated and come from wealthy, mostly white backgrounds. The university requires its students complete a financial declaration form that demonstrates they have £30,000 to pay their tuition and living expenses. Potter has tried every way to raise the money - scholarships, work, loans - but it hasn't come to fruition, so he’s set up a GoFundMe page to ask people for help in fulfilling his dream.

Celaire got into Oxford despite the fact the odds were stacked high against him. He was born in East London’s Hackney before boutique coffee shops, wealthy artists and upscale businesses descended on the area, in the notorious Holly Street Estate. It had been a beacon for crime and abject poverty, but it was also a place where he honed his intellect.

"I wasn’t a naughty child. I was very energetic," Roy Celaire laughs.

I went to one of the worst secondary schools in the country. I got a prize for my five Bs and 2 Cs! That’s how bad the school was. I got a WH Smith voucher. I was shocked.

Homerton College of Technology was eventually closed down due to low attainment and gang violence.

After a haphazard secondary education, Celaire got a place at Southampton University, but a combination of money issues and an incredibly long commute forced him to drop out after a year.

I had to move out. I moved out of London. It was very disruptive for my learning

After the first year I thought uni was not for me.

For the first two months I commuted from Brentwood to Southampton. I woke up at 5am to get to a 9am lecture – and I was still late!

I’m an anomaly. People who have to support themselves? That’s not something people know.

What followed was a few years working different jobs, but the itch to learn never left. "I always had a desire to learn," he sighed.

So he tried again.

In 2010 he enrolled in Brunel University and, three years later, graduated with honours in anthropology and sociology.

His academic trajectory skyrocketed after that: Roy went on to study a masters at the prestigious London School of Economics, where he worked three jobs at 50, sometimes 70 hours a week.

Working was stopping me from reaching my potential. I was always the one leaving. I was annoyed I never got to have that uni experience. 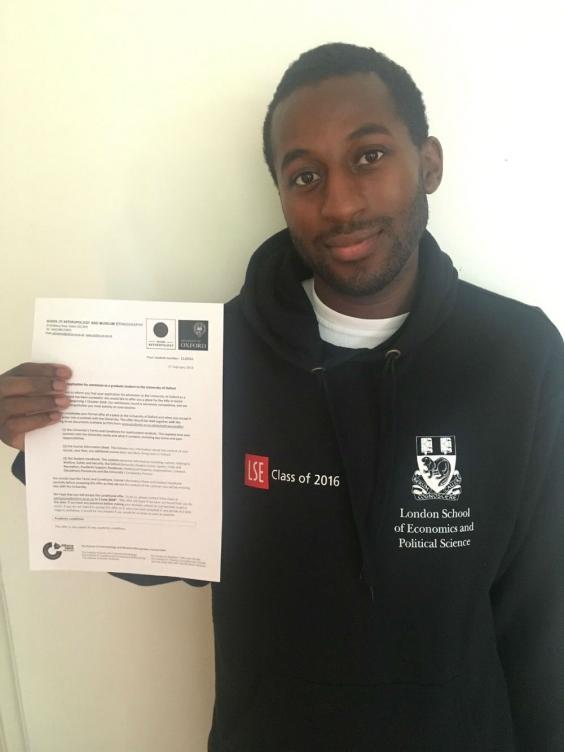 Nevertheless, he graduated, once more with high marks from LSE, where he realised his dream:

He got one step closer when, in 2017, he received a formal offer from the University of Oxford inviting him to study for an MSC in anthropology. Unable to afford the minimum financial requirement of £30,000 for the tuition fees and living expenses, he asked them to defer his place for a year. That year is coming to an end.

Reactions to his Oxford success are "telling", he says.

I’m conscious as a black male it is paramount to have as much ammunition behind you as possible.

So I made sure I went to good unis before, but people [looked like they would] faint when I told them that I got into oxford.

I work around people with money and [many] treat me with contempt because I work full time. It is because I’m black. When I’m on the street, no one sees I have an LSE degree because I’m a black male.

I wear skinny jeans, but people still ask me where they can get drugs. I don’t drink, I don’t do drugs.

It’s very telling, what society thinks of the black man.

"When I wear my LSE hoody or when I’m reading on the train, people always stare. One lady once came up to me on a busy train and said, 'This is nice to see, well done, keep it up.' This was in response to me reading."

Roy worked at Waitrose, and he recalls that customers who went to Oxford responded with confusion when he told them he got a place.

The responses are interesting. ‘You don’t sound like you’re from Hackney.' All these micro aggressions, I want to write about it one day. We’re taught we live in a post-racial society because no one is calling me the n-word in public anymore.

‘Racism has ended,’ they say. It hasn’t.

The truth is that Oxford is still a bastion of white middle-class southern privilege. That is what it is. They have to explain why you are twice as likely to get in if you are white as if you are black.

Damning statistics demonstrated that Oxbridge has a serious diversity problem, with some colleges not admitting any black students for years.

But Roy, 30, isn't worried about being a minority in the university. "I've never been someone that thought, 'Oh well, I can’t go.'"

So close to his dreams - what would he say to young people of colour, and those from disadvantaged backgrounds who are working on theirs?

Someone like me, I’m not supposed to be in Oxford or LSE - if I can get there, anyone can.

It doesn’t matter how old you are, or if you are a year or two behind your friends, it’s never too late to fulfil your dreams and that you should not give up.

"Never think that any uni is beyond your reach because it isn't, and there's a history that isn’t spoken about. These places might not have been built for [you]but you can still get the places if you put your mind to it," he added.

We’ve worked hard to be able to offer a thousand postgraduate scholarships per year, many of which are funded by philanthropic donors who share our ambition of improving accessibility to postgraduate education. We are continuing our efforts to increase these numbers so that even more students can be supported in the future. We recognise that it can be difficult for applicants who don’t receive scholarships to raise money for fee and living costs and that a Masters Loan from the UK Government won’t cover these in full.  Offer-holders are asked to provide evidence that they have sufficient funds to cover year one course fees and to confirm that they can meet living costs, to give clarity about expected expenses.

You can donate to Roy's GoFundMe page here.

Some student is raising money for something as i cannot tell you everything from this so you all need to dig into this topic for more facts as i can say that dissertation help will also be done through this. I am in need of that for those who will see that for them.

Comment by AV Redwood on August 26, 2018 at 3:24pm
All these wealthy Black celebrities and they wouldn’t/couldn’t help him!