This undated photo provided by New Jersey state Assemblywoman Angela McKnight shows "Feel Better Dolls" on the shelf of a One Dollar Zone store in Bayonne, N.J. The black rag dolls that came with instructions to "find a wall" and slam the toy against it have been pulled from three stores after customers and the lawmaker said they were offensive. (Angela McKnight via AP)

New Jersey state legislator Angela McKnight discovered the dolls at a store in Bayonne, N.J., and found them "offensive and disturbing on so many levels." 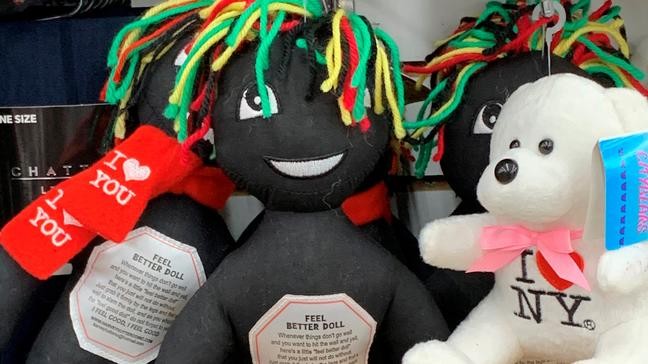 So-called “Feel better dolls,” which resemble black rag dolls, have been removed from shelves at One Dollar Zone stores because of the racist message attached to the front.

The purpose of this doll was to get the owner to abuse it or even find a wall to “slam the doll” into when they were feeling down, the message says.

New Jersey state legislator Angela McKnight discovered the dolls at a store in Bayonne, N.J., and found them “offensive and disturbing on so many levels,” according to CNN.

McKnight also added in a statement on FaceBook, “Racism has no place in the world and I will not tolerate it, especially not in this district. When I saw the doll in person, I cringed and was truly disheartened by the thought of a black child being beaten by another child or an adult for pure pleasure. To have a product depict or teach children that it is OK to hit another child, regardless of race, in order to feel good is sick. Dolls should be a symbol of love, care and affection.”

Bayonne Mayor Jimmy Davis also chimed in by calling the dolls “insensitive” and praising the community for saying something about the dolls.  He ended his post by saying, “We will not tolerate any symbol of hate and division within our community!”

“One Dollar Zone deeply apologizes for this incident,” Shah said.

The controversial dolls weren’t bought individually, but came as part of an assorted 35,000 unit purchase. Workers try to vet all incoming items, but can’t catch everything, a Dollar Zone worker told CNN. The worker also noted that the doll comes not only in Black, but green and yellow as well.

The manufacturing company of the dolls is Harvey Hutter Co., headquartered just outside New York City, appears to have gone out of business, The Associated Presswrites. The company’s website not longer exists and the phone numbers have since been disconnected.

When will the madness end?

People of other races would take out their frustrations more on black people. That is all we need right now.

Comment by red bone on July 28, 2019 at 7:41pm
How therapeutic! Now make one for every race . Anger management. I was appalled at first, but I’m like if everyone had one of their own ethnicity, it can help you take out your anger on instead of in your neighbor. I’m sure psychotherapist will concur.