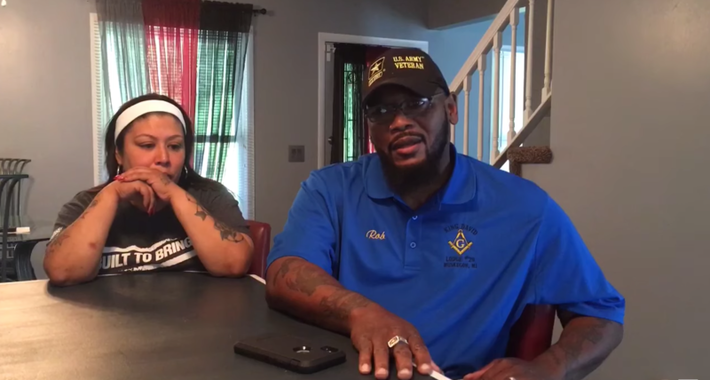 A couple in Holton, Mich. by the names of Rob and Reyna Mathis were ready to place an offer on a five-bedroom home, previously owned by a police officer, until they stumbled upon an official application for the Ku Klux Klan, along with other racist memorabilia.

On Wednesday, August 7, Rob Mathis took to his Facebook page to upload a photo of the framed KKK application, which he took during his house tour, according to The Washington Post. Along with the image, Mathis had the following message in the caption.

“My wife and I have been house shopping for a little over a month now; searching houses in Sterling Heights, GrandRapids, Hudsonville, and Muskegon,” Mathis began. “Today we were looking at a house in Holton that we both agreed would be perfect, so we meet our realtor to see the house it’s beautiful. As we are walking to the house I’m seeing confederate flags on the walls the dining room table and even the garage. I’m thinking to myself as a joke I’m walking to the imperial Wizard of the Ku Klux Klan‘s house right now.”

Mathis continued, “So to my surprise as I walk into the bedroom there’s an application for the Ku Klux Klan in a frame on the wall and this home is an officer of the Muskegon Police Department. I immediately stopped my walk-through and informed the realtor that I am not writing an offer on this home and I am leaving now. I feel sick to my stomach knowing that I walk to the home of one of the most racist people in Muskegon hiding behind his uniform and possibly harassing people of color and different nationalities,” Mathis wrote.

“I’ve thought about this for a few hours now and I thought I would just share with you a picture of the application on the wall. To the officer, I know who you are and I will be looking at resources to expose your prejudice. As for now pictures speak 1000 words,” Mathis finished.

READ MORE: White woman complains about feeling ‘bashed about the slavery’ during plantation tour, sparks outrage
The owner of the home was identified as 48-year-old officer, Charles Anderson.

In response to the now viral post, the Muskegon police department posted their own statement to Facebook acknowledging the situation.

“The Muskegon Police Department has opened an internal investigation after a social media post was brought to our attention accusing an officer of being in possession of certain items associated with a white supremacy group. The officer was immediately placed on administrative leave, pending a thorough investigation,” the statement read.

“The City of Muskegon requests your patience as we thoroughly investigate this issue. Further information will be available upon completion of the investigation,” the statement concluded.

Every week, a minimum of 3 individuals solicit from me, “How long can it take for an individual to
score a band of seven or eight in IELTS?”
It’s a difficult question to answer because everyone is different.
Someone who incorporates a band five (5) can take a much longer time to urge to a band of seven
than somebody who’s at band six and a half (6.5).

Likewise, somebody with numerous time and energy can improve abundantly faster than somebody
who has no free time. This massage goes to those who want to overcome their IELTS hike.
Find out what it takes to get your desired band in IELTS:

Apart from taking the exam, now there is a straightforward process with little effort and time to obtain
your desired IELTS band, even without appearing for the test.
To ensure that you are in direct deal with competent and honest officials from the inside, is to connect
with our representatives and set your way towards obtaining your desired IELTS scores,
that will dramatically change your life for the better.

Brother better watch his back now too because he exposed him and put his job in jeopardy so he may seek revenge on that.  One thing I do know that if black people stopped being jealous of one another and stood strong together, the power we could have...I am always disappointed to see our own kind go against each other when we already have so much stacked against us.

Comment by Fang on August 17, 2019 at 11:25pm
Caribmama n Mr1stroke, you both said a mouth full...meaning y'all r on the money. "White people r just being who they by nature n birth". We are all humans under the sun, not son...but SUN. Many black people are fools if they ever think whites will ever look at us as equals, because they where once our masters...and many of them still think that they are. Bless up....

gee pascal thank you, Negros in America are too comfortable and trust white people too much, they have no idea who they are, where they come from and where thru are going, they live in a white mans world under white mans rules, they complaint, they beg, and fight among each other, white America are just being them selves, but asoon as a Negro find out the truth he or she are shocked and hurt, because white master dont love them

Why be surprised......these are the same cops that are allowed to put a gun in your chest and blow your heart out all video taped for the world to see and a jury says it was justified.

oh no, no comlaining this should be a love letter to the Negros who says there are good cops, and good white folks since they have white friends, but they have yet to show me the good cops, and tell me what makes them so good, if you can witness a coward with a badge assaulting an innocent person or someones mother because of their race, or watch a racist cop kill an innocent black man because of his race, just because you want to protect your pention, how good of a cop are you, when you know the truth and witness the lies everyday as you watch those mothers crying everyday but this is the community you serve the people you get paid to protect, sound like an evil and selfish person to me, you made the choice to tolerate crimes for your own benefits, so the people who call those cops good cops need to get the next bullet either by those cops or the next mass shooting, those f***** cops are now commiting suicide because they are being chased by their own demon, let them burn in hell, and f*** every one who sympathize with cops or white folsk, you mother f****** are so passionate about those people but you cant even walk the street you live in without dodging bullets, id they are so good how come they dont live if your neighborhood, if your whiet friends are so much your friends how come they dont live next door to you in your community unless you move to their community, how come they dont come visit you? damn idiots, your white friends have their kkk membership