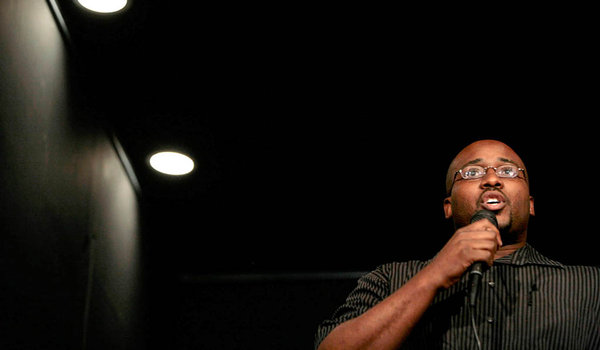 “My mother is very devout,” said Mr. Adams, 30, a Washington resident who has published an atheist children’s book, “Aching and Praying,” but who in high school considered becoming a Baptist preacher. “She started telling me her issues with homosexuality, which were, of course, Biblical,” he said. “ ‘I just don’t care what the Bible says about that,’ I told her, and she asked why. ‘I don’t believe that stuff anymore.’ It got silent. She was distraught. She told me she was more bothered by that than the revelation I was gay.”

This was in 2000, and Mr. Adams did not meet another black atheist in Washington until 2009, when he found the Facebook group called Black Atheists, which immediately struck a chord. “I felt like, ‘100 black atheists? Wow!’ ” he said.

In the two years since, Black Atheists has grown to 879 members from that initial 100, YouTube confessionals have attracted thousands, blogs like “Godless and Black” have gained followings, and hundreds more have joined Facebook groups like Black Atheist Alliance (524 members) to share their struggles with “coming out” about their atheism.

Feeling isolated from religious friends and families and excluded from what it means to be African-American, people turn to these sites to seek out advice and understanding, with some of them even finding a date. And having benefited from the momentum online, organizations like African Americans for Humanism and Center for Inquiry-Harlem have well-attended meet-up groups, and others like Black Atheists of America and Black Nonbelievers have been founded.

African-Americans are remarkably religious even for a country known for its faithfulness, as the United States is. According to the Pew Forum 2008 United States Religious Landscape Survey, 88 percent of African-Americans believe in God with absolute certainty, compared with 71 percent of the total population, with more than half attending religious services at least once a week.

While some black clergy members lament the loss of parishioners to mega-churches like Rick Warren’s and prosperity-gospel purveyors like Joel Osteen, it is often taken for granted that African-Americans go to religious services. Islam and other religions are represented in the black community, but with the assumption that African-Americans are religious comes the expectation that they are Christian.

“That’s the kicker, when they ask which church you go to,” said Linda Chavers, 29, a Harvard graduate student. The question comes up among young black professionals like her classmates as casually as chitchat about classes and dating. “At first,” she said, “they think it’s because I haven’t found one, and they’ll say, ‘Oh I know a few great churches,’ and I don’t know a nice way to say I’m not interested,” she said.

Even among those African-Americans who report no affiliation, more than two-thirds say religion plays a somewhat important role in their lives, according to Pew. And some nonbelieving African-Americans have been known to attend church out of tradition.

“I have some colleagues and friends who identify as culturally Christian in a way similar to ethnic Jews,” said Josef Sorett, a religion professor at Columbia University. “They may go to church because that’s the church their family attends, but they don’t necessarily subscribe to the beliefs of Christianity.”

Given the cultural pull toward religion, less than one-half of a percent of African-Americans identify themselves as atheists, compared with 1.6 percent of the total population, according to Pew. Black atheists, then, find they are a minority within a minority.

In 2008, John Branch made his first YouTube video, “Black Atheism.” With the camera tight on his face, Mr. Branch, now 27, asks, “What is an atheist? An atheist is simply someone who lacks a belief in God.” Half kidding, he goes on, “We’re not drinking blood. We’re not worshiping Satan.” The video has received more than 40,000 hits.

“I think it attracted so much attention because, in the black community, not believing in God is seen as a thing for white people,” said Mr. Branch, a marketing strategist in Raleigh, N.C. “I hate that term, ‘acting white,’ but it’s used.”

According to Pew, the vast majority of atheists and agnostics are white, including the authors Richard Dawkins, Sam Harris and Christopher Hitchens.

Seeking a public intellectual of their own, some black atheists have claimed the astrophysicist Neil deGrasse Tyson, interpreting his arguments against teaching intelligent design in the classroom to be an endorsement of atheism. But Dr. deGrasse Tyson is loath to be associated with any part of the movement. When contacted last week by e-mail, he noted a Twitter exchange he had in August, in which he told a follower, “Am I an Atheist, you ask? Labels are mentally lazy ways by which people assert they know you without knowing you.”

Jamila Bey, a 35-year-old journalist, said, “To be black and atheist, in a lot of circles, is to not be black.” She said the story the nation tells of African-Americans’ struggle for civil rights is a Christian one, so African-Americans who reject religion are seen as turning their backs on their history. This feels unfair to Ms. Bey, whose mother is Roman Catholic and whose father is Muslim, because people of different faiths, and some with none, were in the movement. The black church dominated, she said, because it was the one independent black institution allowed under Jim Crow laws, providing free spaces to African-Americans who otherwise faced arrest for congregating in public.

Recognizing the role of churches in the movement, Ms. Bey still takes issue when their work is retold as God’s. “These people were using the church, pulling from its resources, to attack a problem and literally change history. But the story that gets told is, ‘Jesus delivered us,’ ” Ms. Bey said. “Frankly, it was humans who did all the work.”

Garrett Daniels wrote on the Facebook group page of Black Atheists, “I CAME out that I’m an atheist to my family.” He added, “I’m not disowned and they apparently don’t love me any less.” A member responded: “Good for you. Seeking out religion just to fit in will drive you crazy.”

The Facebook discussion boards for these groups often become therapy sessions, and as administrator of the Black Atheist Alliance, Mark Hatcher finds himself a counselor. “My advice is usually let them know you understand their religion and what they believe, but you have to take a stand,” he said.

This strategy has worked for Mr. Hatcher, 30, a graduate student who started a secular student group at the historically black Howard University. For two of his Facebook friends, though, it has not worked, and they moved to Washington, not to sever ties with their families as much as to keep their sanity.

Now that Facebook groups have connected black atheists, meet-ups have started in cities like Atlanta, Houston and New York.

On a gray Saturday in October, 40 members of African Americans for Humanism, including Mr. Hatcher, Ms. Bey and Mr. Adams, met at a restaurant in Washington to celebrate the first anniversary of holding meet-ups. Speakers discussed plans to broaden services like tutoring and starting a speaking tour at historically black colleges.

“Someone’s sitting on the fence, saying, ‘I go to church, and all my friends and my family are there, how am I supposed to leave?’ ” Mr. Hatcher said on stage. “That’s where we, as African-American humanists, say, ‘Hey look, we have a community over here.’ ”

After the speeches, Mr. Hatcher looked at the attendees mingling, laughing, hugging one another. “I feel like I’m sitting at a family reunion,” he said.

Seated beside Mr. Hatcher was his girlfriend, Ellice Whittington, a 26-year-old chemical engineer he met through a black atheist Facebook group. He lived in Washington and she in Denver, so their relationship progressed slowly, she said, over long e-mails. But Mr. Hatcher said he fell immediately. “We bonded over music. She loved Prince.”

As for being nonreligious in the black community, Ms. Whittington said, “It definitely makes your field of candidates a whole lot smaller.”

ON his blog “Words of Wrath,” Wrath James White is an outspoken critic of Christianity and of African-Americans’ “zealous embracement of the God of our kidnapper, murders, slave masters and oppressors.”

Though his atheism is a well-worn subject of debate with his wife and his mother (a minister), Mr. White, a 41-year-old Austin-based writer, avoids discussing it with the rest of his family. Though he won’t attend Christmas services this year, and hasn’t in years, he said, his family assumes he’s just “not that interested in religion.” To say explicitly he is an atheist, he said, “would break my grandmother’s heart.”

The pressure he feels to quiet his atheism is at the heart of a provocative statement he makes on his blog: “In most African-American communities, it is more acceptable to be a criminal who goes to church on Sunday, while selling drugs to kids all week, than to be an atheist who ... contributes to society and supports his family.”

Over the phone, Mr. White said he does feel respected for his education and success, but because he cannot talk freely about his atheism, it ultimately excludes him. When he lived in Los Angeles, he watched gang members in their colors enter the church where they were welcomed to shout “Amen” (they had sinned but had been redeemed) along with everyone else.

“They were free to tell their story,” Mr. White said, while his story about leaving religion he keeps to himself — and the Internet.

What I will say is that Black people have got to accept that behaviors we consider to be “abnormal” aren’t reserved for whites only. Rates of suicide continue to increase, incest and molestation in black families are on the rise and disbelief in God certainly is growing in our community. People are people regardless of race. Black idiots and white idiots are still idiots at the end of the day I just don't want any lightening striking me when we are sitting together, lol :-)

Ah, we can't let these fools worry us.

The fact is a lot, if not at least half, are homosexual.

The rest have little qualms about abortion and hating on the other gender. So there's very little chance of them reproducing. And those that do have children will raise their children without God or faith in anything good. So they will kill each other or beat each other till they're forced to find God. I see this step happening already. In the end we will be right back to being God focused, though it might take a generation or two of serious suffering.