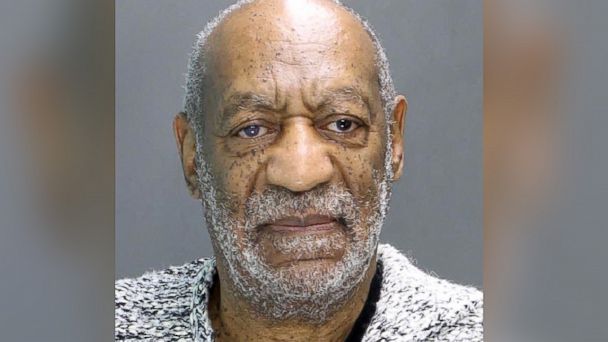 Bill Cosby arrived in court today after he was charged with alleged aggravated indecent assault earlier this morning by the Montgomery County District Attorney's Office in Pennsylvania.

After court, Cosby headed to the Cheltenham Police Department, where his mugshot was taken and he was processed.

The comedian, 78, entered the courtroom in Elkins Park, Pennsylvania, around 2:30 p.m., walking arm-in-arm with his legal team. He will next appear in court on Jan. 14 and his bail was set at $1 million.

Cosby's passport was also turned over to the court and he did not enter a plea.

Attorneys for Cosby said in a statement that the charge by the DA's office "came as no surprise."

The charge "filed 12 years after the alleged incident and coming on the heels of a hotly contested election for this county's DA during which this case was made the focal point," the statement said. "Make no mistake, we intend to mount a vigorous defense against this unjustified charge and we expect that Mr. Cosby will be exonerated by a court of law."

The famed comedian has always maintained his innocence since being accused more than 10 years ago by former Temple University employee Andrea Constand of sexual assault. With that case about to reach the statute of limitations next month, First Assistant District Attorney Kevin Steele said his office had decided to proceed with the second-degree felony charge.

"We examined all the evidence and we made this determination because it was the right thing to do," he said during a press conference this morning.

In 2005, Constand claimed that after she and Cosby became friends, he invited her to his home in Pennsylvania, where he made multiple sexual advances over time. She claimed that on one occasion in early 2004 he gave her pills and wine, which made her unresponsive and unable to move. At that point, Cosby allegedly sexually assaulted Constand.

Constand and Cosby eventually settled out of court for an undisclosed amount, but the district attorney in Montgomery County at the time decided not to press criminal charges.

Steele said earlier today that authorities decided to pursue charges after new information came to light this July. U.S. District Judge Eduardo Robreno unsealed Cosby's deposition regarding the decade-old case this summer, in which he admitted to giving Quaaludes to a woman with whom he wanted to have sex, according to the deposition.

Cosby has been accused by dozens of women of sexual misconduct, with many of them coming forward in the past year. The former TV star fired back last month against seven of his accusers, filing a defamation counter-suit in U.S. District Court.

A request for comment from Cosby's representatives was not immediately returned to ABC News.