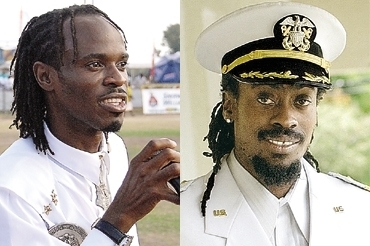 DANCEHALL artist Moses Davis, more popularly known as Beenie Man, has been arrested by the Hunt’s Bay police, resulting from an incident on Saturday with entertainment personality, L A Lewis.

Beenie Man’s manager, 'Blue' said in a telephone interview with the Observer a short while ago, that he was in the process of getting bail for the deejay.

“Yes … it has to do with the LA Lewis incident. Right now we don’t have a lawyer. I am dealing with getting him bailed myself,” Blue said in a hurried conversation.

The police said they got reports that guns were drawn in the incident and say they will be questioning the Deejay about the reports.

Below is the information about what took place...After O'Neil Edwards' funeral on Saturday June 5, 2010...

The reflective and calming mood of the funeral for Voicemail's Oniel Edwards seemingly did little to soothe the nerves of deejays Beenie Man and LA Lewis who reportedly came to blows shortly after.

Reports are that after the funeral, both deejays were heading off when Lewis reportedly slammed into the back of Beenie Man's Audi Q7. It is alleged that an argument developed between the two, during which Lewis was punched in the face.

Lewis said he was travelling along Perkins Boulevard, near Red Hills Road, when the incident occurred. "I was coming down the road and I noticed that Beenie Man stop in the road talking to somebody in another car." He said he was attempting to drive past the cars when the rear of his car hit the rear of Beenie's vehicle. "Di two car dem touch and some paint scrape off. Di next thing mi see is him jump out and start attack mi," he recalled.

Lewis said Beenie Man, born Moses Davis, along with a large group of men, encircled him. He said, "Mi tell Beenie Man seh mi will fix him car and mi seh see $50,000 ya. Him tell mi say him car cyaan fix, so mi ask him how plane whe crash can fix and fi him car cyaan fix."

Lewis said he was distracted by one of the men in the deejay's entourage and when he turned away he was hit in the left side of the face. He said he pushed off the deejay and a crowd began to descend at that point. He said, "About 30-odd man back mi up. One on one Beenie Man cyaan ramp wid mi."

The self-proclaimed seven-star general said he reported the incident to the Duhaney Park Police Station. An officer there confirmed Lewis had made a report against Davis, accusing him of assault occasioning bodily harm.

Attempts to contact Beenie Man were unsuccessful. However, popular selector Rolexx, who Lewis accused of being among the group of men, said at the time of the accident, Lewis was sitting on the window of his van driving on the sidewalk. He said contrary to Lewis' claims, there was not a group of men just himself and Beenie.

Rolexx said after the collision, he did and said nothing to Lewis. He said he did not witness the slap that Lewis accused Beenie Man of delivering.

Another witness, however, said Lewis received several blows from men who had gathered at the scene.

Comment by exotic eyes on June 13, 2010 at 3:03am
real talk Andre. I see a catastrophy will happen in Jamaica. Just too much drama in that country.

Comment by fay carter on June 12, 2010 at 10:39am
what goin on with all the jamaica men because ever time you look is somethin with thin come on we have the nofe stope and thin people we are so mest up

Comment by Allie Hood on June 11, 2010 at 7:01am
I love Beenie but all of these Deejays get what they didn't expect, they come up from the slums poor hard ass conditions so they have no class, reasoning skills etc. The genes of the slums will forever be in them!!! Pure junk!

Comment by Andre on June 10, 2010 at 9:46am
No wonder the caribbean islands are banning them little boys like Beenie man and them