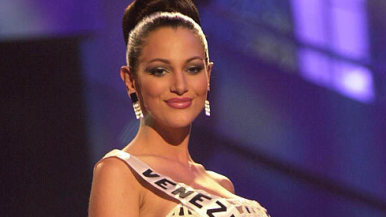 Eva Ekvall, Miss Venezuela and the third finalist for Miss Universe 2001 -- one of the most difficult competions in the history of the event -- died at 28 years old after losing her battle with breast cancer, which was diagnosed in 2010.

Athough the Venezuelan failed to win the coveted title in the 2001 Miss Universe competition in Bayamon, Puerto Rico -- Puerto Rican Denise Quinones won the crown -- Eva Ekvall proved to be one of the toughest competitors in a country that holds the record for the most crowns won by beauty queens.

Ekvall's husband, John Fabio Bermudez, released a statement this weekend, through the Notimex news agency, in which news of her death broke and that of her illness, which she had battled for almost two years and that forced her to move to the United States a few months ago after the cancer re-emerged. Despite her doctors' best efforts, however, "her health deteriorated up until her death."

In addition, through his Twitter account, Bermudez said a few heartfelt words to his wife, whom he married in 2007, and mother to his 2-year-old daughter.

"I want to start by saying ... thank you all for your words, I feel a great sorrow for the loss of my love. Today, the most valiant and brilliant I've ever known has gone. She fought to the last moment, but physically she could not continue.

She leaves us a legacy and an example to follow. With me she leaves her most beautiful creation ... her daughter, Miranda.

I want to thank everyone for their words. We have many people to thank, and it would be endless, such as my children, my family, and so many anonymous heroes who helped us on this long and painful road ... Many thanks Eva Forever!"

In addition, through his Twitter account, in which Bermudez shared a moving image of him and Eva's hands locked together, he also said a few heartfelt words to the woman he married in 2007 and mother of their 2-year-old daughter

Ekvall was chosen at age 17 to represent her country in the 2001 Miss Universe pageant.

Through her reign as Miss Venezuela, Eva launched an acting career and became a news reporter on Venezuelan television. Eva also wrote the first-person narrative, 'Fuera de Foco' (Out of Focus), in which she detailed her battle with cancer, which was detected in 2010 after the birth of her daughter.

Comment by Kenrick Francis on December 21, 2011 at 2:16am
Sorry to learn of this . My condolences go out to your dear family, friends and to all Venezuelans.Blessings and Rest in peace.

Comment by Kenrick Francis on December 21, 2011 at 2:15am
Sorry to learn of this . My condolences go out to your dear family, friends and to all Venezuelans.Blessings and Rest in peace.

Such a beautiful woman!

May you R.I.P. As for your daughter may her life be long and beautiful so that your loved ones will see you through her eyes.

May her soul rest in peace...will be greatly missed!!!!!!