The Prime Minister of Barbados Mia Amor Mottley speaks during the opening ceremony of the COP26 U.N. Climate Summit, in Glasgow, Scotland, Monday, Nov. 1, 2021. The U.N. climate summit in Glasgow gathers leaders from around the world, in Scotland's biggest city, to lay out their vision for addressing the common challenge of global warming.
Associated Press/Alberto Pezzali/File
Barbados Prime Minister, Mia Mottley was sworn in for a second term Thursday after her party appeared to have swept every legislative seat in the first elections the island nation held as a republic since casting off the British monarchy.

Mottley’s Barbados Labor Party seemed to have secured all 30 seats in the House of Assembly, the lower house of the island’s Parliament, giving the island’s first female leader a second term as prime minister. A majority of 16 seats was required for a win.

Mottley achieved the same sweep when her party won elections in 2018.

“The people of this nation have spoken with one voice, decisively, unanimously and clearly,” she said in her celebratory speech before dawn on Thursday to a large crowd clad in red shirts.

Mottley, who pledged to focus on issues including financial security, nutrition, renewable energy projects and housing, said the island faces serious challenges in the next 10 to 15 years.

She noted that Barbados, an island of more than 300,000 people that has reported more than 37,000 confirmed infections of the new coronavirus, is still fighting the pandemic that has battered the economy and tourism sector of the one of the Caribbean’s wealthier nations.

“We have done well as a nation, but we are still not out of the woods,” she said after her swearing-in.

Mottley said she would announce her Cabinet on Monday and declined to share details about any upcoming changes to government positions.

“I’m going to sleep on all of that this weekend,” she said. “In life I’ve learned that you don’t do things in extreme happiness or extreme anger, and that what is required is reflection and a little rest.”

Leaders from around the region hailed the election results, including Carla Natalie Barnett, the secretary general of the Caribbean Community, a 15-member regional trade bloc, who congratulated Mottley on her “resounding victory.”

“We’ve lost our democracy without intending it,” she told local media and called the voter turnout “depressive.”

“It was a reckless time to call an election,” she said.

Mottley was criticized for calling a snap general election shortly after Barbados cut ties with Queen Elizabeth II in November and ceased to be a constitutional monarchy. The next elections had been scheduled for mid-2023.

More than 266,000 people were eligible to vote, but preliminary information suggests that only 50% participated. More than 5,700 were unable to vote because of COVID-19 infections, prompting one opposition candidate to seek an injunction prior to the election, which a court rejected. 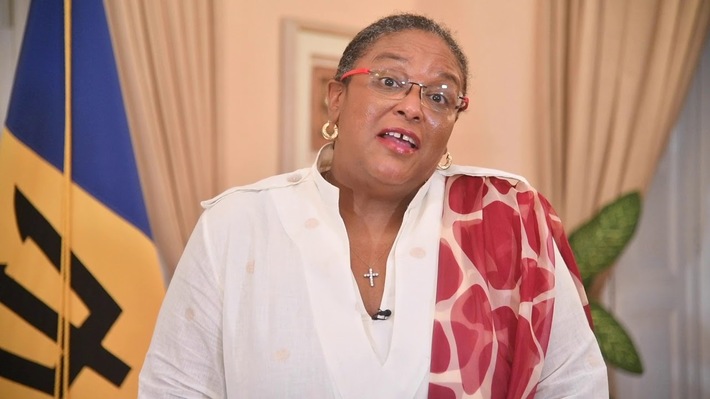 Mottley called the snap election in December, saying it would help promote unity as the government battled the coronavirus pandemic, which has heavily affected the tourism-focused economy.

"We stand today on the morning of the 20th of January confident that the people have spoken with one voice - decisively, unanimously and clearly," Mottley told cheering supporters at the headquarters of the Barbados Labour Party (BLP).

"We want to thank each and every one of the people of Barbados for the confidence that they continue to repose is us," she said in the victory speech broadcast online.

The BLP won all 30 seats in the national legislature, according to reports and electoral maps published by local media. The party had previously held 29 seats following its landslide win in 2018.

Mottley's snap vote moved up the election by about a year and a half. Opposition leaders had criticized Mottley for holding the election at a moment when some people were infected with coronavirus and could not leave their homes.

About 5,500 people from a population of just under 300,000 are in isolation due to COVID-19, according official figures.

The opposition had unsuccessfully sought a court injunction to stop the vote on the grounds that holding vote amid pandemic restrictions violated suffrage rights.

The former British colony declared independence in 1966 but retained Queen Elizabeth as its ceremonial head of state until Nov. 30 last year. She was replaced by President Sandra Mason.

Another modern day slave colony that serve the Queen.