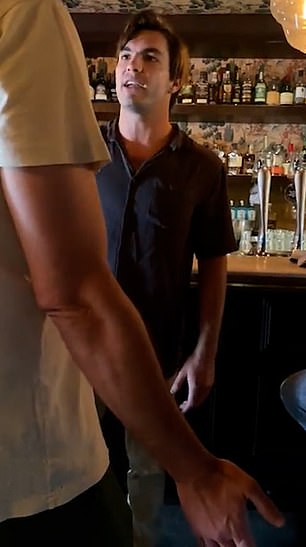 A Cape Town pub drew a rebuke from the South African government and widespread condemnation on Tuesday after it allegedly barred a black man from entering without a white escort.

The government urged police to probe 'with speed' the 'appalling' and 'racist incident', which it said saw 25-year-old Thabiso Danca denied entry at Hank's Olde Irish pub in Cape Town.

'It is horrifying and outrageous that the tendencies of apartheid South Africa keeps rearing its ugly head,' cabinet spokeswoman Phumla Williams said in a statement

A South African bar has allegedly banned people from entering without a white escort, causing outrage. Thabiso Danca, 25, was allegedly denied entry at Hank's Olde Irish pub in Cape Town. In a video which went viral online, Christopher Logan, a friend of Danca, who is white, is seen confronting what appears to be the pub's manager, pictured

The incident happened last week and emerged after a video went viral online showing a friend of Danca - Christopher Logan, who is white - confronting what appears to be the pub's manager.

In it, Logan says Danca tried to enter the pub shortly after his friends during a night out in the touristic city, but was blocked by a bouncer who told him black patrons were admitted only if accompanied by a white person.

'You don't have the right to discriminate in this country, it's a crime,' Logan is heard saying.

Mr Logan said: 'You don't have the right to discriminate in this country, it's a crime.' 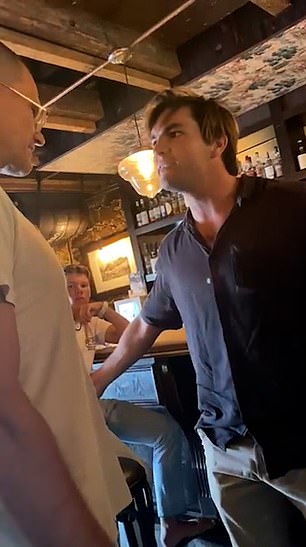 Mr Logan said: 'You don't have the right to discriminate in this country, it's a crime.' Pictured: The reported manager speaks with Mr Danco's friend Christopher

Speaking to the Cape Times, Mr Danca said of the incident:  'I only stayed inside the place for five minutes or less, then left because it didn't feel right to be there in a place I'm not wanted in.

'I was still in shock and felt humiliated because I was barred from entering the place in front of a crowd. 'My concern is that many more people could experience this or have already but are scared to speak up,' he said.

A man who declined to give his name, answering the Hank's Olde Irish pub telephone, today said he had 'no comment' as he waited to speak to his lawyer. 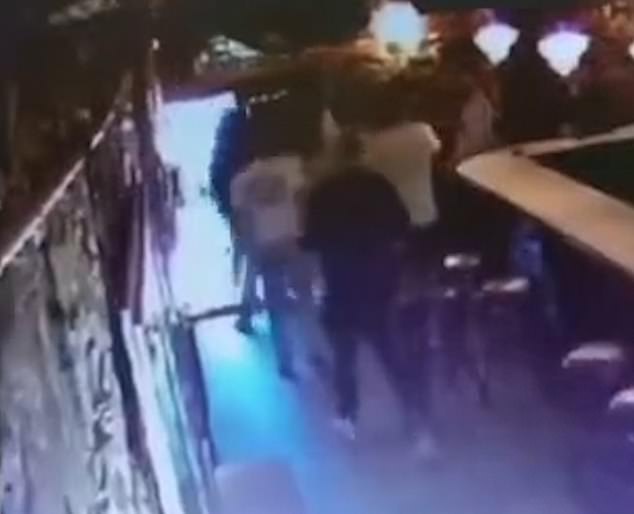 Today, the bar denied the allegations that Mr Danca had been told to enter with a white escort. Pictured: CCTV the bar released, which alleged the men assaulted them 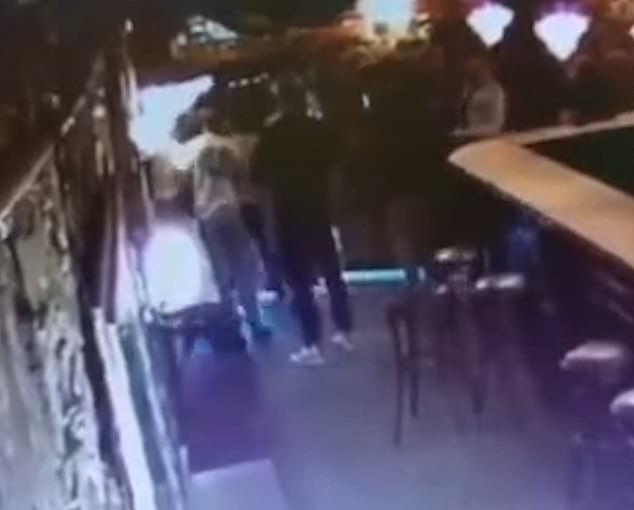 The bar released CCTV of the alleged incident, claiming the men involved assaulted them

The pub was closed today, with a note on the door describing the accusations as 'unfounded and unproven'. It added that the owners and staff have received threats and were physically assaulted by the 'primary individual' in the viral video.

'We as the owners have never - nor have we ever instructed our staff - to discriminate on any basis whatsoever,' the note read.

In a statement about the alleged incident, cabinet spokeswoman Phumla Williams, said: 'It is horrifying and outrageous that the tendencies of apartheid South Africa keeps rearing its ugly head.'

Police said two assault cases were registered at the weekend and an investigation was ongoing.

Economic Freedom Fighters, a radical leftist party, called for a picket outside the eatery, saying that the incident was not an 'isolated' one but 'structural and endemic.'

Last month, a woman was arrested after a WhatsApp voice message circulated on social media seeming to call for black people to be banned.

Man it only goes to show that white folks ain't gonna change and we need to stop begging to be included in their party.

Okay obviously they don't need your support, they can do without you, that is their policy, it ain't their fault that you don't have your own space to enjoy, negros spend more time complaining about what white people are doing than using the energy to create their own.

If they make it for you, you go right ahead and destroy it with Non sense violence, you are killing over a dice game, no one wants to be around you, they see you as wild animals, monsters, let me guess black people don't have money or cannot afford to open their own place, but they sure have money for everything else, if you can spend $150k in a car, you can start your own  establishment. Stop being under white people, stop looking for acceptance and hugs.

MY parents always say when people don't want to play with you and you have no one to play with, create your own game with your own imaginary friends, make sure you are having fun and the same people will want to play with you. Isn't it true when a black person start something that is successful and fun, white people either want to buy it or destroy it. Look for greatness, start your own, be where you are wanted, many of us who can afford to go where ever we want are not begging nor complaining, we know where we can just walk in and they will call us sir.

My family wants to do a Christmas vacation I told them to count me out because the only place I want to spend Christmas is an establishment where a black person or family actually own the whole thing, not managing for a white person, but actual owner like a resort or something, and the only place I see is somewhere in Africa where one family own the whole island including the resorts, hotels and amusement park, so I put that on my bucket list, if by the time i am ready to visit it becomes white own, I won't visit. See some of us don't care about white people and not trying to be around them, stop crying and begging for white people's acceptance, sit your black ass down.