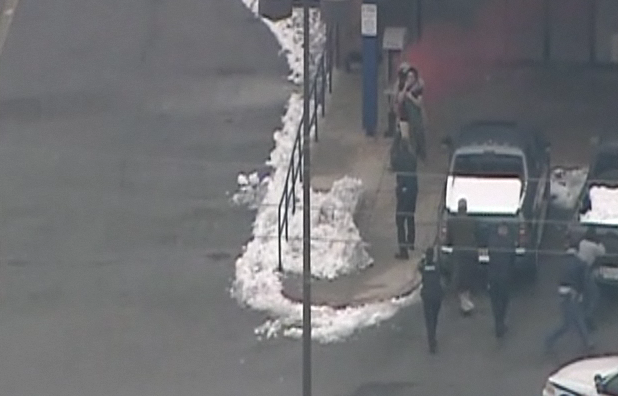 A bank robber made a key mistake trying to escape with a hostage in tow and got his brains blown out because of it.

Armed with a handgun and a fake bomb made of a sponge wrapped in foil and duct tape with copper wires sticking out of it. The would be thief entered a Capitol One Bank in Tacoma, Washington.

He was quickly in over his head as one customer tried to wrestle his gun away from, but got pistol whipped instead, while someone else hit the alarm button.

As police surrounded the bank, the suspect comes out with a hostage. Smoke from dye packets could be seen coming out of his bag as he moved towards the parking lot away from police. But then he slips, loses his grip of the hostage who run towards police. Inexplicably the suspect runs in the same direction and gets lit up with bullets.

Comment by Bombahdrop on February 8, 2011 at 1:09pm
He might have gotten away if he didnt have on those washed up shoes on lol

Comment by RDysan on February 3, 2011 at 2:21pm
It's sad but at the same very funny...the criminals start believing that they can do what they see in movies and we all become too de-sensitized by what we see in the movies...the guy is a knucklehead and went out like one..

sorry didn't mean to offend. I'm just saying this system and the people that crated it are corrupt. I agree with what you say.

When I was a teen i wanted to be a thug.i was with my best friend when he tried to rob a drug dealer. The dealer shot him in the face. and the police tried to send me to jail for the killing. So I know now that when you violate people you basically deserve what you get. I was just saying eventually the chickens will come home to roost. And america will pay for its sins. Just like I had to pay for mine with a ten year crack addiction.

Comment by IslandgirlNY  It is unfortunate but when you decide to take what does not belong to you, then you should expect the unexpected including death.
Europeans stole this land from the native americans. Not only did they take their land but in some places wiped out the entire race. Gone are the Taino, the Caribs and the Arawak.
I wonder who is going to shoot these thieves in the back as they run.

Comment by Iaso Tea - Natural on February 2, 2011 at 4:51pm
oh my.. how unfortunate.. did he really expect to get away? unfortunately this will be happening more.. America is in crisis..

Comment by kcrunchone on January 31, 2011 at 9:08pm
Lets be clear the bag is small and the funds were definitely not of a substantial amount at all more like a trivial minute amount, fact he lost his life. The part we all dont know is his story, why did he do what he did? He was obviously desperate for cash, the economy has brought the devil out in all of us, some not in the extremes as this man took but never the less still present. I can not say I agree with laughing at his death but we all can laugh at the comments, It is a dark world we live in and humor is the light. Let us all remember the morning this man awoke and decided to do what he deemed necessary was the day he laid his life on the line for what he though he had to do to survive. In all of us there are survival mechanism and they are all different and all have levels of which we will go to LIVE. He died for what he believed in, unfortunate but sad Live by the sword die by the sword. His reaction was natural, his judgment was not.

Comment by Shottah Alliance on January 31, 2011 at 7:56pm
ITS FUNNIE BUT ON THE OTHER HAND THEY DIDNT HAVE TO SHOT HIM

Comment by JamRockLady on January 31, 2011 at 5:15pm
@Ripper...since when did I say or imply I "preferred" anyone losing their lives?  What you're are saying or implying I said is extremely incorrect and inaccurate.

Comment by Ripper on January 31, 2011 at 4:55pm
@JamRockLady You just said the point is a man lost his life? You prefere the hostage losing her life? I think its better his than hers. That's someone's mother or wife. I feel no pity for him.

Comment by BianchiD on January 31, 2011 at 3:09pm
@JamRockLady, I agree with you; but that still doesn't change the fact that I disagree with ppl laughing at him being an idiot, and so I will state my opinion. There are plenty other things you can classify as "drama" on here but not the point I just made. I will end it here because there is no reason for debate.