At least 3 dead 9 wounded, 5 with life-threatening injuries – after mass shooting at a Halloween costume party 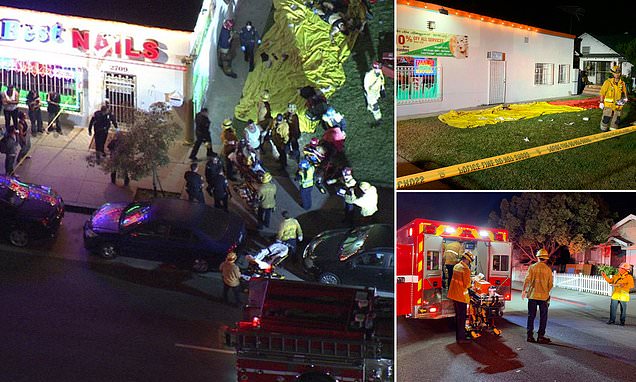 Three people are dead and nine others wounded after a mass shooting during a Halloween party at a home in California.

Police and firefighters were called to the house in Long Beach on Tuesday at about 10.45pm following reports of multiple shots being fired.

Three men aged in their 20s were found dead in the backyard of a house behind a nail salon.

Five other victims were taken to hospital with life-threatening injuries and another four were also later transported to hospital. 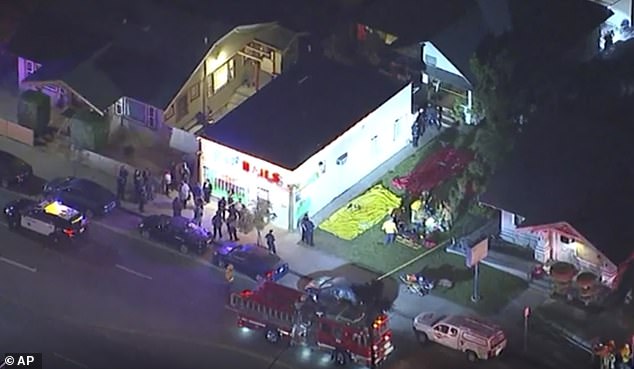 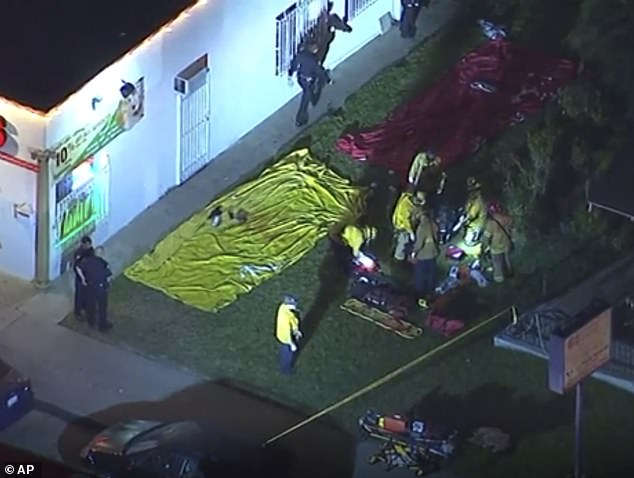 Police and the fire brigade were called to a home in south Long Beach around 10.45pm local time Tuesday to reports of multiple shots fired
Emergency services in California attend Long Beach shooting

At least one suspect opened fire at the house and fled the scene, according to authorities.

Investigators were unable to give a motive for the shooting, provide a description of the shooter or shooters, and could not say whether they fled on foot or in a vehicle.

Witnesses said people wearing costumes were seen limping out of the building following the attack.

Three bodies were visible on the ground as paramedics were treating people on a grassy area outside a nail salon before loading them into ambulances, ABC7 reports.

Neighbours told the Long Beach Press-Telegram that up to 30 shots were fired, and that a white vehicle had sped past the scene around the same time. 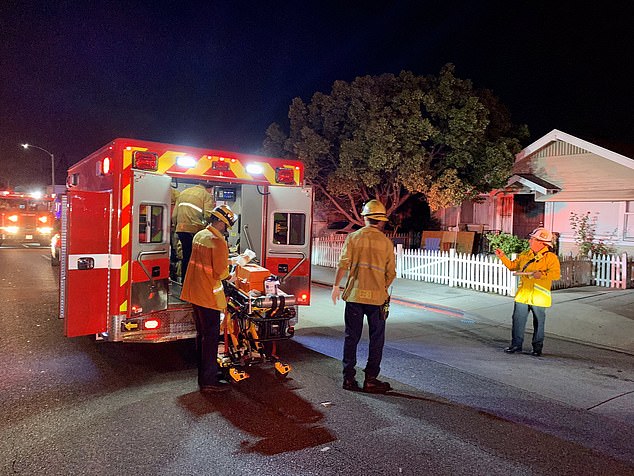 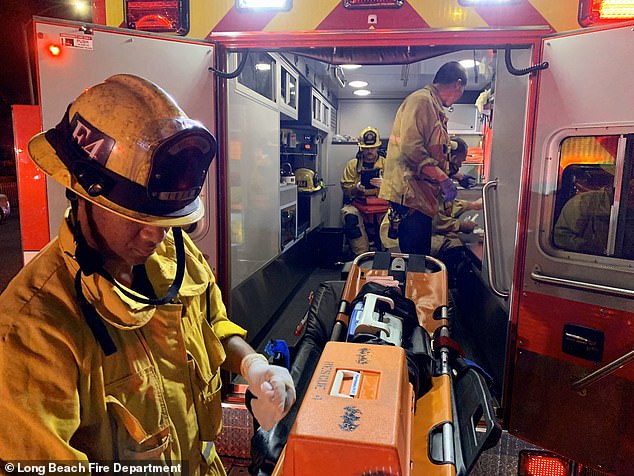 Five of the wounded suffered life-threatening injuries and were immediately taken to hospital, while another four were transported later 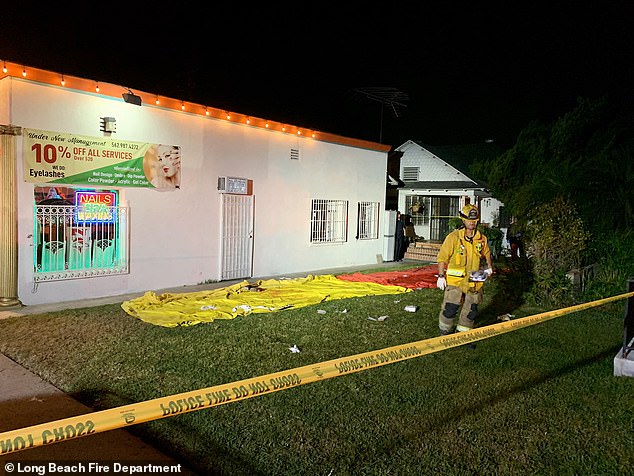 Police said three adult men were found dead in the back yard of this home behind a nail salon, while witnesses said some of the victims were treated on a grassy area outside

Lambert Alcendor, 21, told the newspaper that he was walking to a liquor store when a white vehicle swerved in front of the nail salon before '20 to 30 shots' rang out.

Although he didn't see gunfire coming from the vehicle, he said he was confident that's where the shots were fired from.

Another local, who gave his name only as 'Martin', said he heard a car accelerating ahead of him and swerving suddenly before the shots started.

The street where the shooting occurred is primarily a residential area, with a few stores dotted around a busy intersection.

Locals said gunshots are occasionally heard, but that mass shootings of this kind are rare. 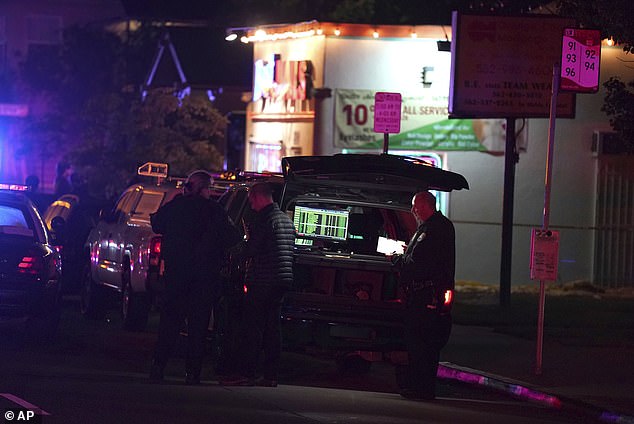 Officers were unable to give a motive for the shooting, and could not say whether the suspect or suspects had fled on foot or in a vehicle 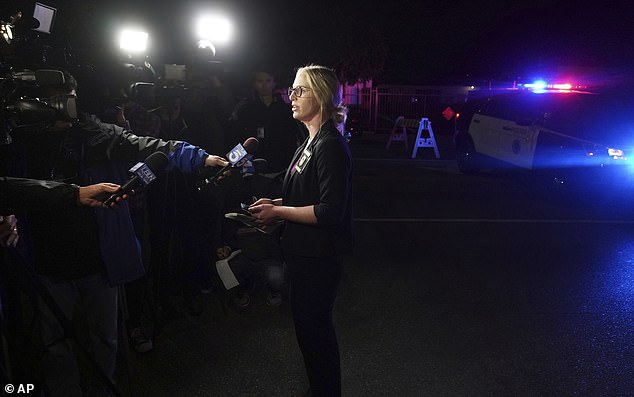 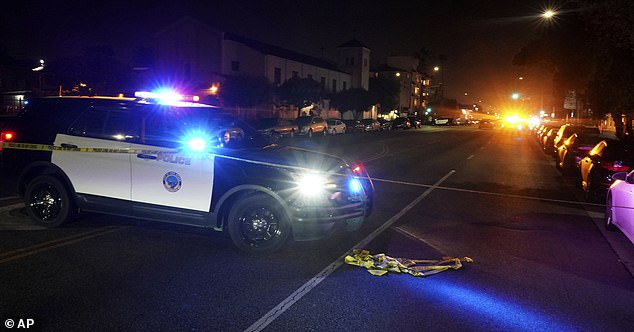 Police close off the scene around a shooting in Long Beach, after multiple gunshots range out around 10.45pm Tuesday

Comment by mr1stroke on October 30, 2019 at 4:20pm
Thats the best time to do a shooting, this is the best time to come for your enemies, so easy to blend in and do what ever and look how ever, its like the day of the purge