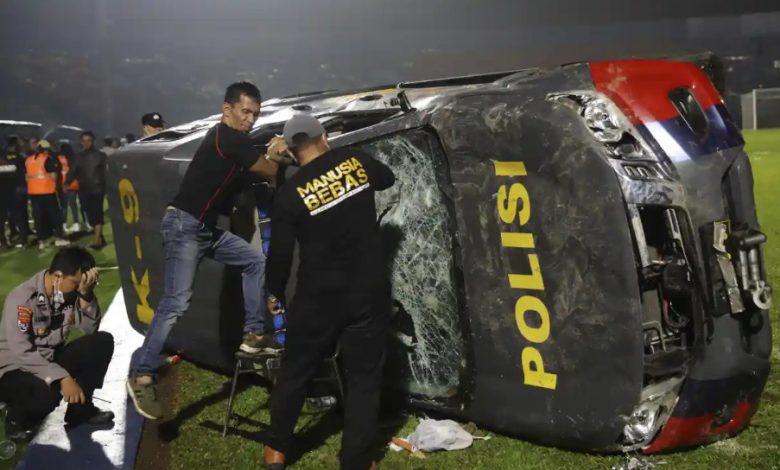 There have been at least 174 fatalities and about 180 people injured at a football game in Indonesia resulting from teargas used by present authorities who were trying to stave off fans who were rioting and invading the pitch. This in turn caused the panicking crowd to disburse and trample each other.

The organizers of the event and the police are facing criticism over the use of teargas inside the stadium as it conflicts with FIFA guidance and resulted in one of the worst disasters in stadium sports history. Rights experts call for answers after pointing out safety guidance which states that “crowd control gas” is prohibited by authorities and officials around the perimeter of the field. 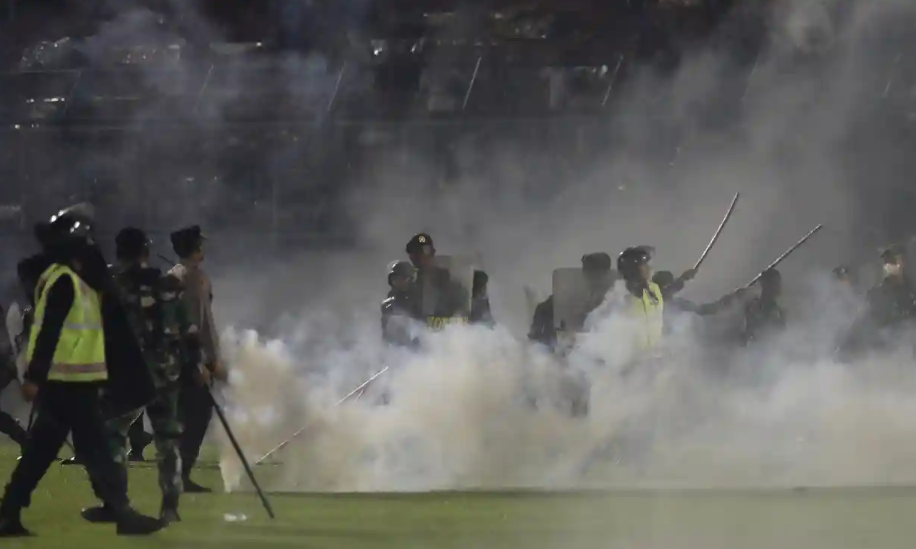 The commotion took place on Saturday, October 1, 2022, in East Java at the Kanjuruhan stadium in Malang regency after Persebaya Surabaya defeated their competitor, Javanese club Arema in a match.

Reportedly, Nico Afinta, East Java’s police chief stated that the fans of the losing team charged the pitch in droves, causing law enforcement to set off the tear gas which led to people being crushed, trampled and suffocated in the struggle to get away. Two officers were among the deceased.

“They went out to one point at the exit, then there was a buildup – in the process of accumulation there was shortness of breath, lack of oxygen,” Afinta said. The youngest victim accounted for was 5 years old.

Gianni Infantino, The FIFA president, declared that the event is “a dark day” for all football enthusiasts and “a tragedy beyond comprehension”. He extended his condolences to the friends and family members of the deceased and voiced that “The football world is in a state of shock.”

Joko Widodo, the Indonesian president, ordered law enforcement to reassess security measures at football matches and commanded the postponement of Liga 1 matches as images and footage of the tragedy on social media showcased the chaos of spectators pushing to elude the teargas and others trying to get the injured out of harm’s way. 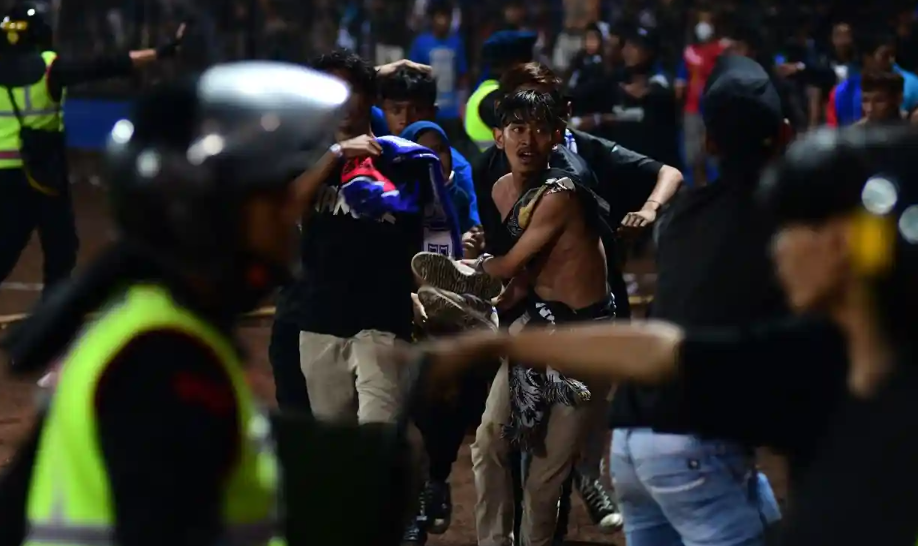 Usman Hamid, Amnesty International’s executive director for Indonesia, voiced that there must be answers for the many lives lost and implored the police to sanction those who have committed rule violations in open court instead of issuing mere slaps on the wrist.

The revision of teargas as a police weapon is also being called out to avoid such future devastation. Amnesty remarked that teargas should only be used in cases of widespread violence and only if other methods fail. He also said that people should be notified beforehand that it will be used.

Another issue raised was the venue being filled past capacity after Mahfud MD, Indonesia’s chief security minister, made an Instagram post on Sunday that tallied the total number of tickets to 42,000 when the maximum stadium capacity was 38,000 people.

Wiyanto Wijoyo, head of the Malang regency’s health office, says that the number of injured spectators is still being tallied.

Reportedly, local reporters stated that around 3,000 onlookers rushed the pitch and more hostilities transpired outside the stadium where vehicles were torched, police trucks included. The destroyed vehicles lined the streets following the aftermath. 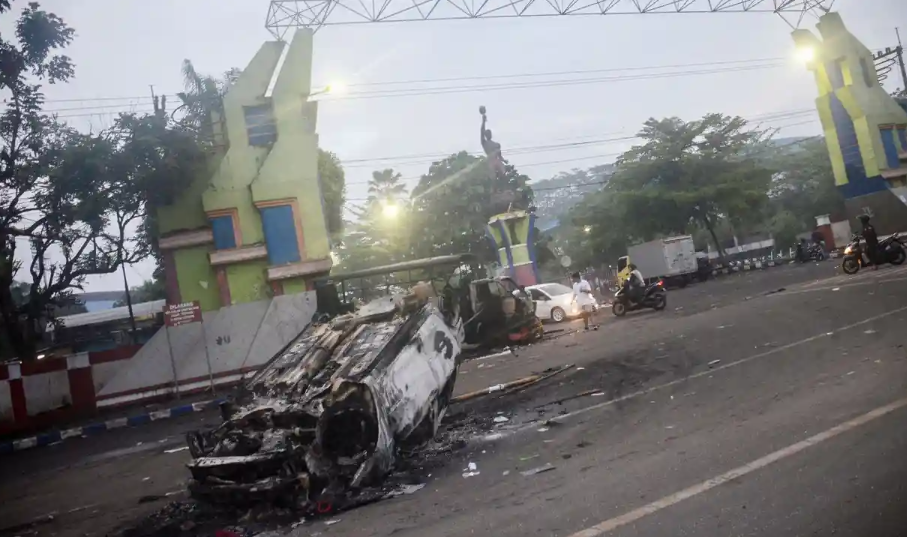 Zainudin Amali, Indonesian sports and youth minister said, “We’re sorry for this incident … this is a regrettable incident that ‘injures’ our football at a time when supporters can watch football matches from the stadium.” He promised to thoroughly investigate what transpired on Saturday.

Continuing, he announced that the organization and supporters attending the match will be evaluated and they will discuss if banning supporters will once again be implemented.

Mahfud MD also pointed out that event organizers ignored the recommendation of hosting the event in the afternoon as opposed to in the evening.

Football violence has been a long-standing issue in Indonesia. According to government officials who spoke to Channel News Asia back in June, 78 people have fallen victim to fatal football-related accidents.

An investigation into the incident will be carried out as stated by the Indonesian football association (PSSI).

Akhmad Hadian Lukita, president director of PT Liga Indonesia Baru mentioned, “We announced the decision [to suspend the league] after we received a direction from the chairman of PSSI.” Continuing, he remarked that this is being done “to respect everything” while awaiting the investigative procedures of the PSSI.

Watch the report below.

At least 170 people are dead after chaos and violence erupted during an Indonesian league soccer match into the early hours of Sunday, according to Indonesia’s National Police Chief in what is one of the world’s deadliest stadium disasters of all time

Supporters of Arema FC and rival Persebaya Surabaya, two of Indonesia’s biggest soccer teams, clashed in the stands after home team Arema FC was defeated 3-2 at a match in the city of Malang in East Java, police said.

Supporters from the losing team then “invaded” the pitch and police fired tear gas, triggering a stampede that led to cases of suffocation, East Java police chief Nico Afinta said during a press conference following the event.

Two police officers were also among the dead, he said, adding that the crush occurred when fans fled for an exit gate 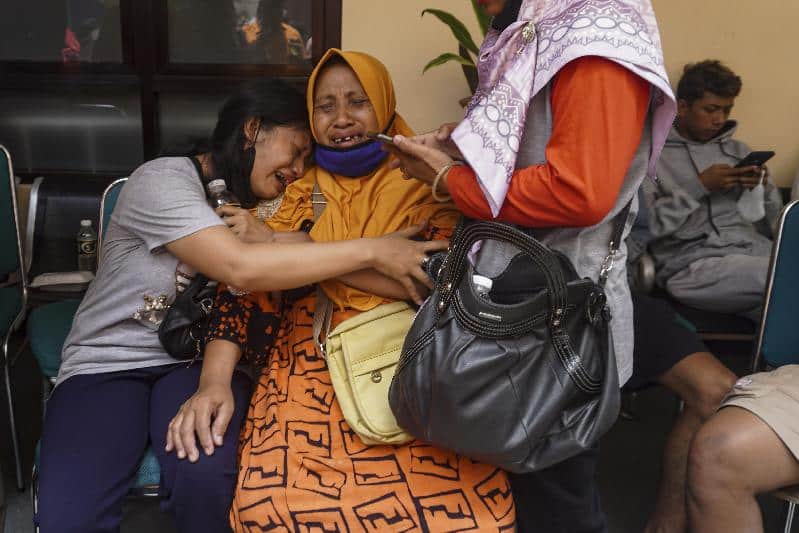 More than 300 people were injured, according to Indonesian authorities, with fears that the death toll could rise.

Earlier on Sunday, the governor of the East Java province, where the incident occurred, said the death toll was at least 170.

Indonesian President Joko Widodo, also known as Jokowi, on Sunday ordered all league matches to be halted until investigations were completed.

“I have specially requested the police chief to investigate and get to the bottom of this case,” Jokowi said in a televised speech. “Sportsmanship, humanity and brotherhood should be upheld in Indonesia.”

“I regret this tragedy and hope that it will be the last to occur in Indonesian football. We cannot have anymore (of this) in the future.”

Videos filmed from inside the stadium late into the night and shared on social media showed fans, dressed in red and blue — the home team’s colors — storming the field and clashing with Indonesian security forces, who appeared to be wearing riot gear.

Smoke, which appeared to be tear gas, was also seen later in videos, with several people shown being carried into a building. Officials said that many had been admitted to nearby hospitals, suffering from “lack of oxygen and shortness of breath.” 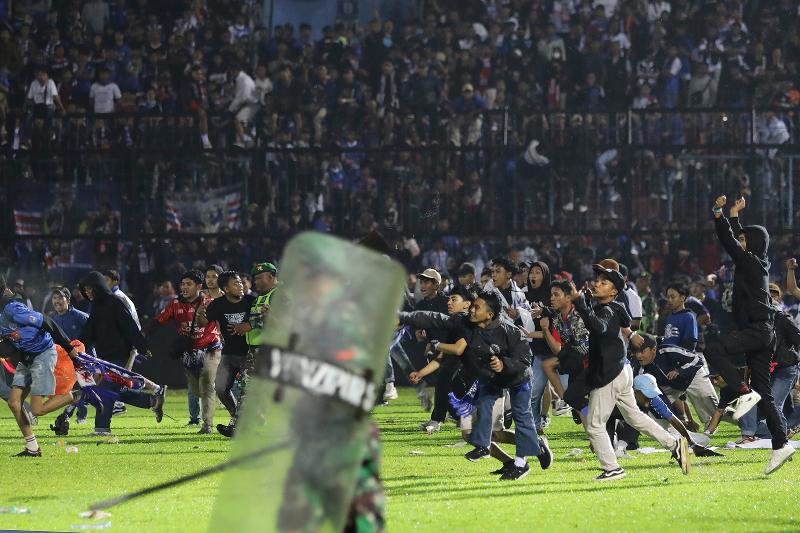 One of the worst stadium disasters in history

Located in East Java, the Kanjuruhan Stadium is used mostly for soccer matches — with its full capacity estimated at 38,000 spectators

But 42,000 tickets were issued for Saturday’s game, according to ministry officials.

“We had anticipated the (large) numbers and suggested that the game be held in the afternoon instead but it went on in the evening,” Indonesian Chief Security Minister Mahfud MD said in a post shared on his official social media accounts.

He added that the stadium had been “filled beyond its maximum capacity.”

“Our proposals were not met. I also would like to emphasize that supporters in the field were Arema FC’s.”

There have been previous outbreaks of trouble at matches in Indonesia, with a strong rivalry between clubs sometimes leading to violence among supporters.

“All sports clubs (in Indonesia) that compete between the cities are always intense,” Indonesian football analyst Dex Glenniza told CNN, who noted that it was “forbidden” for Arema and Persebaya supporters to visit each other’s stadiums.

“(This is) in order to avoid friction and clashes between supporters,” he said. “But there are still many incidents between the supporters, most of which off the field.” 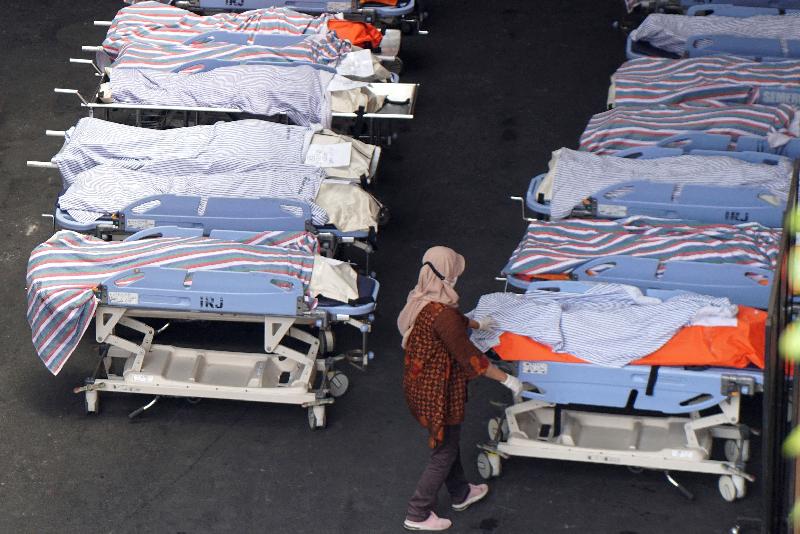 Police chief Listyo said officers will look at the organization and security that was in place during the match, and that a number of specialized units have been dispatched to investigate the incident. The probe will also look into the police officers who were on duty at the time of the incident, he said.

Damn, even willow beast when they stampede don't run each other over, they have more sense.