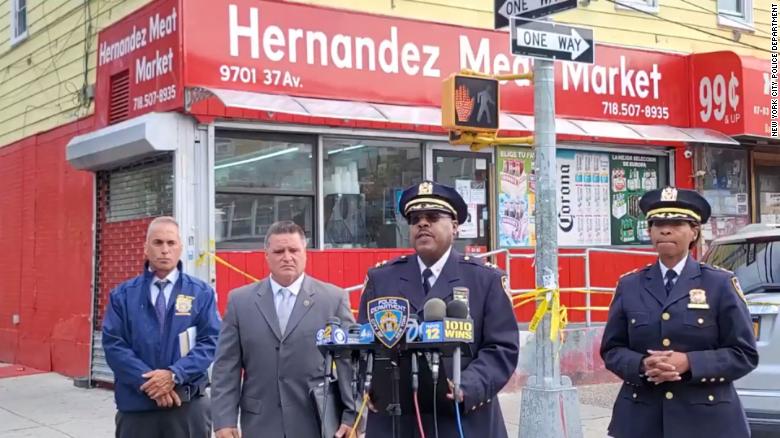 At least 10 people were injured in a mass shooting in New York City late Saturday evening.

The individuals, whose ages range from 19 to 72, are being treated in local hospitals for non-life-threatening injuries, the New York City Police Department said.
Around 10:38 p.m. Saturday, police responded to numerous 911 calls about a shooting, Assistant Chief Galen Frierson, of the NYPD's Patrol Borough Queens North said at a news conference Sunday morning.
"A preliminary report shows two males approached eastbound on the sidewalk on the north side of 37th Avenue from 97th Street while brandishing firearms," Frierson said. "The shooters advanced toward the crowd, firing numerous shots before jumping back on two scooters driven by two other males and fleeing the scene."
Police are now searching for the four individuals they suspect are behind the shooting. They are described as males who were wearing masks and hooded sweatshirts.
CNN defines a mass shooting as a shooting that injured or killed four or more people, excluding the shooter.
"There's just one common theme I want to get out there that's a recurring theme that keeps happening, and it has to stop throughout the city," James Essig, chief of detectives, said during the news conference. "That's gang members, that's guns -- multiple guns on the scene -- scooters being used, masks, and lastly unintended targets getting hit. This is unacceptable in our streets in New York City and it has to stop."
Police believe three of the 10 injured are Trinitarios gang members and the other seven victims were not intentional targets, he said.
"The uptick in gun violence has been a reality of daily life in the outer boroughs and for communities of color. This is not just a Manhattan problem making headlines because we are concerned about scaring away tourists," City Council Member Francisco Moya, who represents the 21st Council District that includes the Corona neighborhood where the shooting happened, said in a statement.
"We are trying to survive the COVID-19 pandemic -- and a gun violence pandemic. This is why I'm working to bring more opportunity for interventions to our neighborhood through Saturday Night Lights and Cure Violence."
The Gun Violence Archive noted the Queens mass shooting as one of five mass shootings that took place on Saturday. Indiana, Illinois, Ohio and Kentucky also saw mass shootings where no deaths were reported, GVA reported Sunday.

Most of us are helpless.

Correction it was 12 shootings for one weekend, last one was in brooklyn, 2 dead again I asked those always making excuses how come the Jewish, Indians and asians community are not shooting and killing each other? Don't tell me about the white community since that is your best excuse and while you at it read Willie Lynch Making of a slave, that community will only get worse, the only group of people who,enjoys killing each other for fun

They still have those guys on the streets after what they did to Junior?