At least 10 dead when FEDEX truck slams into students bus 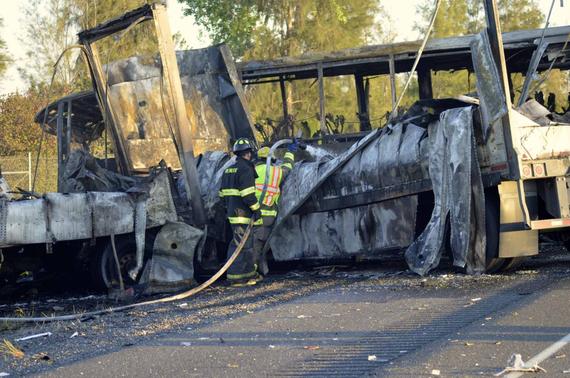 At least ten people died, many of them high school students, when a tractor-trailer slammed into a tour bus with college hopefuls heading to a campus tour in northern California on Thursday, California police said.

More than 30 others were injured after the driver of a Fedex truck lost control, crossed a divider on Interstate 5, side-swiped a car and then smashed head-on into the tour bus around 5:30 p.m. on Thursday, California Highway Patrol (CHP) spokeswoman Tracy Hoover said. 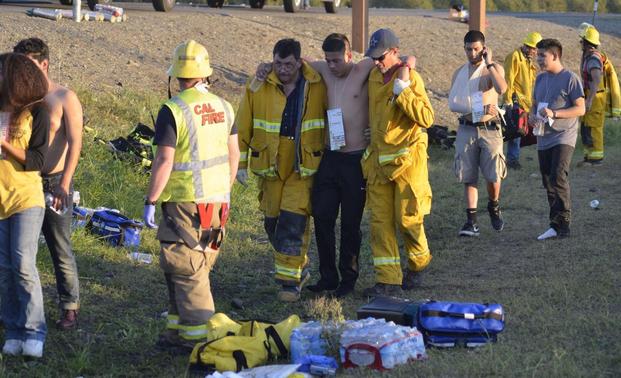 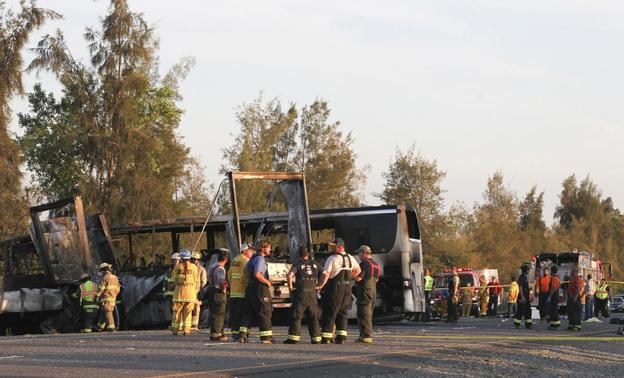 Fire-fighters douse the wreckage at the scene of a collision of a tractor-trailer and a tour bus on Interstate 5 near Highway 32 near Orland, California, April 10, 2014, in this handout courtesy of the Chico Enterprise Record.

Apart from the driver, the bus was carrying between 44 and 48 students and several chaperones to Humboldt State University (HSU) for a campus tour, CHP spokeswoman Lacey Heitman said.

The crash took place near the community of Orland, 95 miles north of Sacramento.

Five students, two chaperones and the drivers of the FedEx truck and tour bus were killed, CHP and the university said. CNN quoted Lt. Bill Carpenter of the CHP as saying three chaperones died, which would put the death toll at 10.

The students, traveling from Los Angeles-area high schools, were part of a program the university says "brings low-income and first-generation prospective college students from the Los Angeles and San Francisco areas to HSU's campus".

"They are traumatized, absolutely. Most of them have scratches, cuts, burns, contusions and lacerations - a magnitude of injuries," Hoover said.

Pictures from the scene showed the bus reduced to a burned-out chassis resting sideways across the highway. Yellow tarps appeared to be draped over bodies in the wreckage. Hoover described hunks of twisted metal and broken glass and said flames had roared through the vehicles.

"The big rig and the bus were both engulfed in flames. You are talking about two vehicles that are destroyed. There is hardly anything left of the truck," Hoover said.

About 34 people were taken by air and land ambulances to area hospitals, CHP said. Shasta Regional Medical Center, which received two patients, said one was in stable condition while the other was undergoing testing and additional treatment.

Eleven people were taken to Enloe Medical Center in Chico, where two were listed in critical condition, three in fair condition and five in good condition, a hospital nursing supervisor said. One survivor's condition was undetermined.

An official at Mercy Medical Center in Redding said it had treated and released five patients.

The condition of the others was not immediately known.

No one in the car was killed, though the driver was sent to hospital with unspecified injuries, CHP said.

Interstate 5 was closed in both directions and was not expected to reopen until early Friday morning.

Bonnie Kourvelas, a spokeswoman for FedEx Corp, said the company was aware of media reports that one of its trucks was involved in the crash. The condition of the truck's driver, she said, was unknown.

"We are cooperating fully with authorities as they investigate," she said.

Of three charter buses carrying students to Humboldt State University, a second one from the Los Angeles area and one from the Fresno area made it safely, the school said.

The students were to visit the campus for two days and stay in residence halls, HSU said.

Humboldt State University President Rollin Richmond said students from southern California had been traveling to the college campus for a spring preview event on Friday.

"Our hearts go out to those who have been affected, and we are here to support them, and their families, in any way possible," he said in a written statement.

(Reporting by Dan Whitcomb in Los Angeles and Eric Johnson in Seattle; Additional reporting by Laila Kearney in San Francisco;

Comment by Dexter on April 12, 2014 at 9:38am
As more details emerge, this was truly a tragic accident. 9 kids with potential lost in the span of a week between the crash in Brooklyn & now this. May they all rest in peace & deepest condolences to family & friends.

From what I'm hearing, most of the kids on the bus were 1st generation college bound kids, the 1st in their families to attend college. One victim was a twin & 2 of the adults that perished had recently gotten engaged. Tragic

Comment by Bombahdrop on April 11, 2014 at 7:52pm
Boats,aircrafts trains and bus rides are out of order for a while now . can't trust ur life with drivers u don't even know.

WOW....condolences to all the families and I hope the injured recover.  Wonder if he was sleepy, tired or what.

Comment by Dexter on April 11, 2014 at 8:34am
Condolences. I heard the truck crossed over into the path of the bus colliding head on with the bus. Truck driver may have fell asleep.