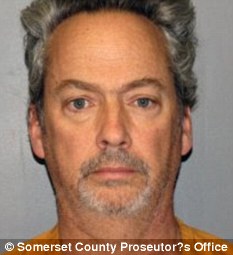 Patrick Lott, 54, of Somerville, New Jersey  was arrested after videos of nude teenagers were allegedly found in his home.

Nine of the teenagers identified in the videos, which date back to January 2008, are currently under the age of sixteen.

Detectives also found the area where a camera had been installed for video recording, reports the Ledger.

Lott has been the assistant principal at Bernardsville Middle School since 2009 and was working as a volunteer at Immaculata, a Catholic School.

Jack Bennett, spokesman for the prosecutor’s office, declined to say what work Lott did with Immaculata, reports the Ledger. Lott was also active in local politics and ran for a Somerset County freeholder seat around 20 years ago.

The Republican’s most recent run for public office was in 2009, when he failed in a bid for a Somerville council seat.

As a high school wrestling coach for over a decade, Lott won the Courier News' Boys Basketball Coach of the Year in 1998.

He told the Courier News in 2002 that; 'I enjoyed the interaction with the kids. You become attached to the kids you coach.'

The principal faces charges of child endangerment and invasion of privacy.

Lott is remanded at Somerset County Jail with bail set at $500,000, reports the Ledger.

The investigation is ongoing and anyone with information is urged to contact the Somerset County Prosecutor’s Office Sex Crimes and Child Abuse Unit at (908) 575-3300,Somerset County Crime Stoppers Tip Line at 1-888-577-8477, or online at www.somersetcountycrimestoppers.org.