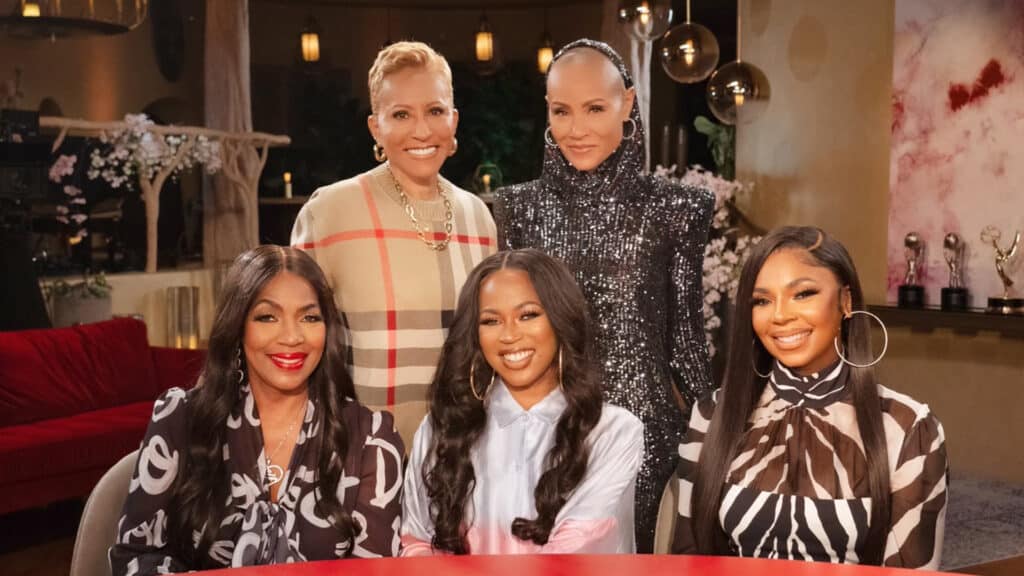 In this week’s episode of “Red Table Talk,” Ashanti, her younger sister Kenashia “Shia” Douglas, and their mom Tina open up about the domestic abuse Shia endured for years

In their first family interview together, Shia is bravely revealing what led to chilling photos of bruises, black eyes, and broken teeth. Ashanti speaks out about feeling helpless, wanting to take matters into her own hands and the important steps their family took to heal, per the official synopsis.

Shia explains to hosts Jada Pinkett Smith and Adrienne Banfield Norris that the first time she experienced physical abuse, she did not call the police.

“So the first time that he laid hands on me was actually really horrific. He kind of planned the whole thing out, the whole scenario. So he put the blinds down. He–yeah, like, it was an actual planned out thing. He was upset about something. It was an argument that we got into, and he questioned me on some things, and I was just completely unaware. I’m like, you know, ‘What’s going on?’ And he literally just punched me in my mouth, which was, like…I can’t describe the shock,” she shared

“I can’t describe the pain. It was like, ‘Where is this coming from, and why are you doing this to me?’ I ran, and he chased after me, and he began to continue to hit me. I ran to a neighbor’s apartment,” Shia continued. “I stayed at the neighbor’s for probably, like, an hour or so. I was able to actually have one of my sister’s security that worked in LA come and escort me and see me out and make sure that I was good. I had to grab whatever I had on me, and I went to a hotel.”

The full conversation is an eye-opening look at domestic abuse incidents that happen every three seconds in America. Watch the episode via the player above.

In the images, Shia is seen with a battered and bruised face. As reported by Vibe, Shia has previously spoken out about being a victim of domestic violence.

“It is Domestic Violence Awareness month. Words will never be able to express the amount of pain, fury and disgust I feel reliving these moments,” Ashanti’s lengthy Instagram post starts. “but at the same time I am so proud of how strong, courageous, resilient and unbreakable you are. My sister is a warrior! I love you deep and infinitely.”

Her message continued, “Thank you for being so brave and bringing awareness to this evil, vile and sad behavior that so many women face every day. You did it! You won! Some women feel so scared that they have no way out… by sharing your story you bring hope, strength & continue to raise awareness for Domestic Violence.”

Shia previously revealed that it was her ex-fiancé, Slow Bucks, who violently abused her. In 2020, she released graphic photos of her injuries, which included having reconstruction surgery on her mouth and jaw, The YBF reports.

“God continues to bless you every day as you grow, prosper… and walk in your purpose…your heart, mind and conscience are clear…you will get back EVERYTHING YOU DESERVE!!! The universe always wins!” Ashanti wrote to her sister in her latest Instagram post.

“So continue to hold your head high as the sun. I’m so excited for this next chapter of your life @wifeofcreation is only the beginning! Im here by your side always and forever with whatever against whoever! Loving you infinitely,” she concluded.

Shia previously shared on social media that she stayed in a “toxic” relationship because she wanted to “create her own family.”

Its worst to have violence..

Domestic violence is not only just one way man hits woman,  it actually has always gone both ways. It also includes verbal abusage too which can also be threats or threatening actions.

Finding it so hard to believe that Ashanti isn't aware that men suffer from the dv as well. The same vulnerabilities exist for men, and more due to the belief that they should have to "man up" and take the abuse. If the fight against domestic violence is about saving families then we all need to sound like it at the very least.