Armed Robbery Of Restaurant in Jamaica Caught On {VIDEO} 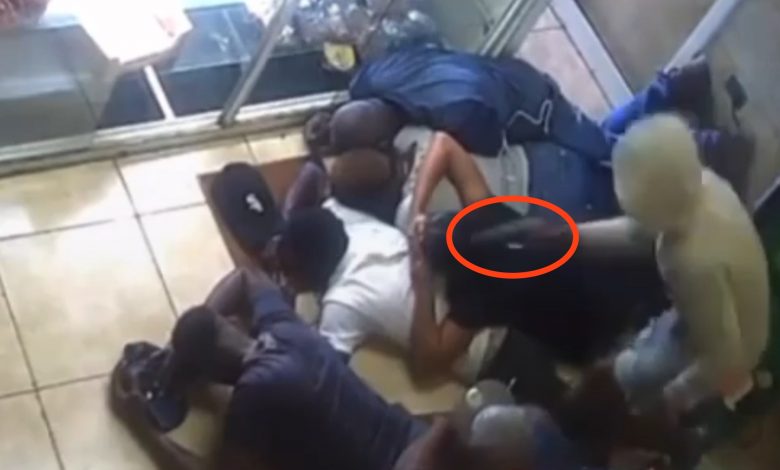 This video clip is currently making rounds on social media, it shows the moment three armed men began to rob a restaurant at an undisclosed location in Jamaica.

The footage starts off with a worker calling one of the robbers for a box of food that was ordered. A pistol was brandished by one of the robbers who proceeded to point it at the worker and ordered her to open the glass door to let them in.

A total of six individuals were robbed, three males and three females.

Watch the happenings below.

Most small businesses in Jamaica use burglar bars and serve customer through a little cage door just small enough for the food and change to fit in. The sad thing is, these animals run free while lawful persons have to be locked in cages. And even worse, sometimes these vermin scumbag animals will give the people who are safe inside, the option to either open the burglar bars or they will burn down the place. I am sure some of them marched wihen George Floyd and other Blacks were killed by police in America, how hypocritical. too bad these savages cannot be placed in a cage when caught, and burned alive.

Comment by mr1stroke on January 21, 2022 at 6:07pm
Let's be thankful that no one had to lose their lives over a dollar, people have to understand these days, we live in a time where there are people who refused to work and earn a living, they are always looking for an easy way out and any one any where can be their next victims.

There are others who are tired of struggling the more they try the more they are being ignored. So they create a way to survive, it may not be the right way, but it keeps them going for a moment, because their mind cannot reach far to create, they will eventually become victims of their own circumstances, as sad as it may seems they usually get a few dollars, thieves with intelligence won't rob you with a gun, if you only knew, oh well let see how long they will survive

WHEN YOU LIVE BY THE GUN AND MISCHIEF

I AIN'T FEELING NO REMORSE WHEN YOU DIE BY THE SAME THING...