Opponents on capital punishment will no doubt renew their argument against it after a botched execution took place Wednesday, July 24, in Arizona.

Joseph Rudolph Wood was scheduled to die by lethal injection. He was declared dead at 3:59 PM, an hour and fifty seven minutes after the execution began.

Associated Press reporter Astrid Galvan witnessed the execution. She said Wood was administered a pain killer and sedative, after which he started gasping for air. The inmate reportedly gasped at least 600 time over the next hour and 40 minutes. 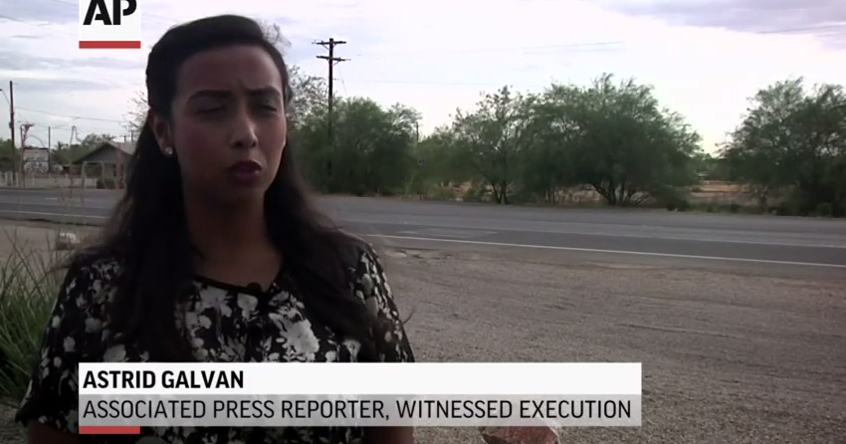 Woods lawyers filed emergency appeals with state and federal courts asking that the execution be stopped, but were denied.

Jeanne Brown, left, had a sister and father murdered by Joseph Rudolph Wood

Woods was convicted in the shooting deaths of estranged girlfriend Debra Dietz, 29, and her father, Gene Dietz, 55, at their auto repair shop in Tuscon in 1989. On the days of the murders he went to the shop and waited for Gene to get off of a phone call. Gene then shot him in the chest with a revolver and smiled.

Debra, who was frantically trying to call for help, was grabbed by throat by Wood who told her, "I told you I was going to do it. I have to kill you," according to a witness.

Gene Dietz never approved of his daughter's relationship with Wood because he was abusive. At the time of her death Debra had an order of protection against him.

He made a statement about finding Jesus prior to the beginning of his execution, but did not apologize to the victim's family members who were there.

"I take comfort knowing today my pain stops, and I said a prayer that on this or any other day you may find peace in all of your hearts and may God forgive you all."

Wood then turned his head towards the family members and smiled. A gesture that only angered them more, according to the Associated Press. "He's the one that pulled the trigger. This man conducted a horrifying murder and you guys are going, 'let's worry about the drugs,'" said Richard Brown, the brother-in-law of Debbie Dietz. "Why didn't they give him a bullet? Why didn't we give him Drano? We didn't give him the drugs. The state gave him the drugs and he went to sleep and that was it. He smiled and laughed at us and went to sleep. So all you people that think that these drugs are bad, the hell with you guys." 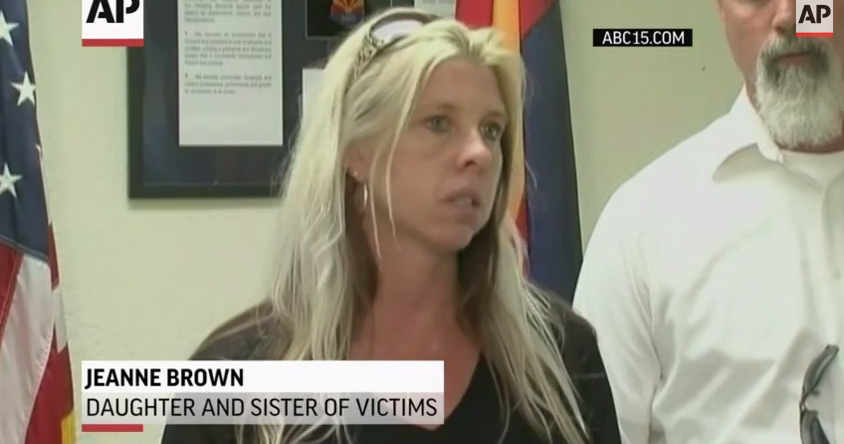 "Throughout this execution, I conferred and collaborated with our IV team members and was assured unequivocally that the inmate was comatose and never in pain or distress." Arizona Governor Jan Brewer said a full review of the state's execution process will be ordered. However, she was satisfied with the way Wood's was handled.

"One thing is certain, however," Brewer's statement read, "Wood died in a lawful manner and by eyewitness and medical accounts he did not suffer. This is in stark comparison to the gruesome, vicious suffering that he inflicted on his two victims - and the lifetime of suffering he has caused their family."

Richard Brown frustrated with people debating lethal injections. Says the killer got what he deserved

Good, hope he suffered, people worrying about how a convicted killer, is put to death..

Comment by Lenny Sportshake on July 24, 2014 at 6:02pm
Is a woodchipper dem fi put dem rassclaat murderers inna then put the so called human rights people in deh after dem.

Comment by Sarah Sankarsingh on July 24, 2014 at 2:17pm
Ok we must feel sorry for this man, who killed 2 people then smiled as they took their last breath.

I totally agree with the Victims family. 2hrs is too short.  This dude actually should've been dead 20yrs ago...