ARE OUR TAX MONEY SUPPOSE TO PAY FOR PUBLIC SCHOOL STUDENTS LUNCH?

Two Utah senators ate lunch at a Salt Lake elementary school Thursday to make it clear they believe no child in Utah should go hungry.  The visit came after an incident Tuesday at Uintah Elementary School, where fifth-grader Sophia Isom was met by a district nutrition manager during lunch who was monitoring students' school lunch accounts. The manager took her school lunch and threw it away."So she took my lunch away and said, 'Go get a milk,’” Sophia said.   "I came back and asked, 'What's going on?' Then she handed me an orange. She said, 'You don't have any money in your account so you can't get lunch.’” 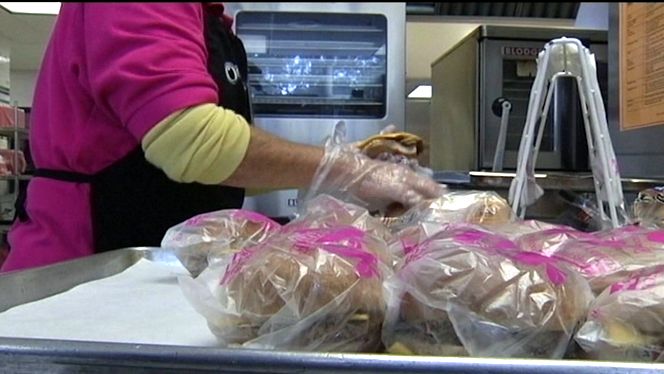 She was one of the 30 to 40 students at Uintah Elementary School, 1571 E. 1300 South, whose school lunches were taken away and thrown into the garbage because their parents didn't have enough money in their accounts. "We were all blind-sided," said Erica Lukes, Sophia’s parent, who said her account was paid.  Some students and staff members were in tears during lunch Tuesday. The district apologized Wednesday. "It was wrong. It should not have happened, and we apologize that it did," Salt Lake City School District spokesman Jason Olsen said Thursday.

Sens. Jim Dabakis, D-Salt Lake, and Todd Weiler, R-Woods Cross, ate lunch with Uintah Elementary students Thursday. "We think that children should be as well-fed as legislators," Weiler said before eating his lunch of ravioli, meatballs, fruit, veggies and milk. Dabakis, who did not eat his vegetables but did pay for Weiler's $3 lunch, said the lunch provided an opportunity for the legislators to look at solutions for feeding children in Utah's schools.  Dabakis promised that he and Weiler will meet with Senate leadership about potential legislation. Weiler said whoever is found to be responsible for the incident through due process should be fired, because that person "used (their) power to humiliate and embarrass children."

According to Olsen, a district employee came to the school Monday to look into the school's claim of unpaid account balances, which Olsen said involved between 50 and 70 of the school's 550 students. School officials tried to call parents on Monday and Tuesday, according to Olsen. But several parents said they were not notified. "Even if they did try to send the word out, you still don't do that to a child," Lukes said. "You don't take a lunch out of their hands." District policy mandates that schools work with parents on unpaid balances, which would include giving them "as much notice as possible," Olsen said. "There shouldn't have been food taken away." The district's Auxiliary Services director is working to determine exactly who took matters into their own hands on Tuesday.

Because of food handler concerns, the confiscated lunches ended up in the trash. When asked how the students got all the way through the line before finding out about their balance, Olsen said that the lunches are federally funded, so the cashier checks the meal for nutrition standards before the transaction. Solutions may include having someone inform students of their lunch balance before they get their food, Olsen said, so future food is not thrown away. Paid meals have less than a 30-cent reimbursement per meal, so they are not a means of income for schools, according to Kim Loveland, the coordinator of child nutrition programs at the State Office of Education. The Salt Lake City School District, as well as several other school districts, has computerized programs that enable parents to set up recurring payments and get timely notifications. Salt Lake City encourages parents to use that system, which can be accessed from their website. "That will help," said Olsen. "But we also need to handle these things with delicacy."

The district's investigation will try to determine whether its online lunch payment system's automatic debit system was working correctly, Olsen said. A possible glitch in the system may explain why so many parents were unaware of their low account balance. Neither senator blamed the school, but both agreed that changes are in order. Weiler said he would rather let the district come up with a solution before imposing legislation. Dabakis said even if the district solves its lunch problems, legislators need to take advantage of "the issue of the moment" and find a permanent solution to school lunches in Utah. Kids should never go hungry, he said. Lawmakers need to "streamline the bureaucratic system" and find a way to feed all children, even if some children get free lunch who may not qualify. "If there's any doubt, feed the kid," he said.

The Salt Lake District is not the only place where students have had their lunches thrown away. Megan Allen said her son, who attends West Hills Middle School in the Jordan School District, sees lunches get thrown away for an unpaid balance every day. Jordan District spokesman Steve Dunham said the district are more strict with secondary school students. Sometimes lunches get thrown away after getting replaced by a smaller substitute, but not before schools make “every attempt” to notify the parents. The Jordan School District does not have a set policy but will allow elementary school students to get lunches on credit for up to five days, after which the principal will work with the student and family. District cashiers are told specifically not to deny lunch to any students in elementary school, said district spokeswoman Sandra Riesgraf.

Parents at West Hills Middle get an email when the account is at $10, $5 and a note home at a zero balance. The school's cafeteria workers have also allowed students to call and get a verbal commitment from the parent that they’ll pay, Dunham said. Parents can also make immediate payments on mobile devices. Principals in the district can also work with a family that is in a difficult financial situation, Dunham said. In the Granite School District, when an account hits zero, the student still gets lunch and the parents get a phone call and a letter. The Canyons School District, Davis School District and others have similar notification systems.

That sucker who took the kids lunch and put in the trash should be forced to retrieve it and eat it then be Fired...A Heartless SOB.