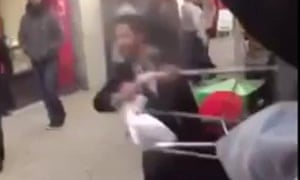 
A 25-year-old man has handed himself in to police after video footage emerged that appeared to show a man screaming Islamophobic abuse at a pensioner, and then seeming to throw his walking frame out on to the pavement.

The passenger, who had a young child with him, appears to shout: “Go back to Turkey.”

The video also appeared to show obscene remarks about the victim’s daughter, wife and sister during a five-minute tirade on a packed bus in Tottenham, northLondon. The offender then appears to grab his victim’s walking frame and hurled it on to the pavement.


The words “You’re talking in a different language, but nobody knows what you’re saying” are heard at one point. “Go back to Turkey if you talk that s***. Oh no, you can’t because s*** gets blown up in Turkey. That’s why you’re here, mate, free benefits and a walker. Well your walker is going to go flying when this bus stops mate.”

Police are appealing for witnesses after the clip was posted online. 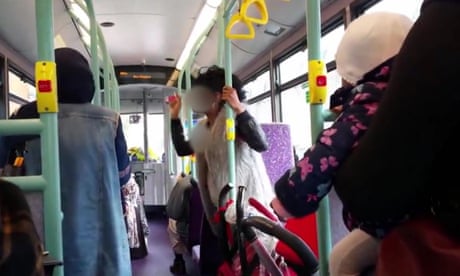 A Met police spokesman said: “This video footage, which includes racist and Islamophobic abuse, has been brought to the attention of the Met police. The incident is believed to have occurred on Saturday, 17 October and understood to have been directed at an individual by the suspect in the footage. Detectives are working to establish precisely when and where the footage was taken.” Anyone who witnessed the incident can call police on 101 or Crimestoppers on 0800 555 111.

A Met spokesman said late on Monday evening that a 25-year-old man was in custody at a north London police station.