Angelina Jolie Criticizes President Obama for Doing Nothing about Sudan 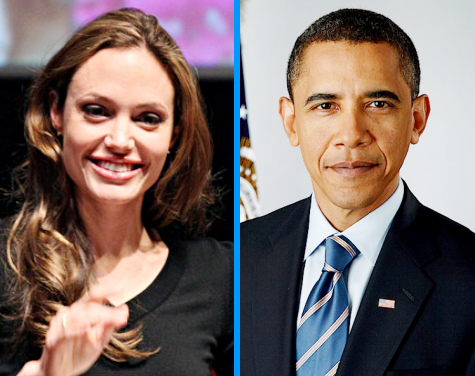 In her recent article, the 34-year-old actress urges President Barack Obama to start taking serious act in dealing with ethnic conflict in Darfur.

Angelina Jolie has taken a jab at President Barack Obama. In her article entitled "Justice Delayed Is Not Justice Denied" which was published in Newsweek on December 10, she criticized the 44th President of the United States for not being firmed enough in helping to resolve the ethnic problem in Darfur, Sudan.

Jolie further pointed out the fact that the Obama administration hasn't done any serious action to bring corrupt Sudanese leaders including President of Sudan, Omar al-Bashir, to justice. The impunity of those people, she believed, has left 300,000 people dead and 2.7 million others internally displaced in Darfur since 2003.

"I believe President Obama and his special envoy Scott Gration will do their best to bring peace to the region. Their policy, though, raises a number of questions," she additionally wrote. Although the 34-year-old actress came up with good hope for the president, she once again questioned, "How is the Obama administration's approach to Sudan an evolution of justice?"

"In addition, when the administration says it intends to work to 'improve the lives of the people of Darfur,' I would like to know what that means, besides the obvious point that their lives could hardly get worse," she moreover wondered. "In Sudan, the administration should explore ways to bring al-Bashir to justice, even as it encourages stability in Darfur."

Jolie, in the end, encouraged others to be aware of the fact that there are still many people suffering from injustice. "On this Human Rights Day - the same day President Obama receives his Nobel Peace Prize -- we must also remember those who have been deprived of their rights," she wrote. "Holding perpetrators of mass atrocities accountable is the best way to ensure justice today and peace in the future. Sudan is the place to start."

Comment by Britt on December 15, 2009 at 4:05pm
Joli you need to shut to F--K up and go make babies and take people husbands

Comment by dStream on December 14, 2009 at 10:37pm
I suspect your response is to me. First, no where in my original comment I mentioned "African Children". And in regards to "Helping out African Children", I do know what it means. More importantly helping out others period without advertising what help has been provided is even more rewarding. No need to "Study" when application of this process is where the rubber meets the road.

REALLY MEANS YOU WOULD NOT WRITE WHAT YOU JUST WROTE.

Comment by dStream on December 14, 2009 at 9:45pm
Noticed that the same folks writing about the color of the skin straightening their hair to have a similar image as the same person that they are condemning. Turns out that the same person being condemned actually contributes to helping many under privileged children.

As one of our brothers that has passed on said "Until the color of a mans skin is no more significant than the color of his eyes it's... ...war".

It's obvious that some care what the sister thinks as there is evidence with the response - Twice. Breath well folks. Rise to the high frequency...

Comment by GGGIAN1 on December 14, 2009 at 8:57pm
WHO CARES ABOUT WHAT WHITE BUTT THINKS....JUST ANOTHER LOW CLASS WHORE TRYING TO GET SOME ATTENTION OFF OF A BLACK MAN LOL PAY HER NO ATTENTION...NOW MOVING RIGTH ALONG.

Comment by yvette welsh on December 13, 2009 at 10:49pm
Enough already, this crisis didn't happen 12 months ago, President Obama isnt God. All the others didn't stop this hell. Why must America jump into every crisis.

Comment by YVETTE on December 13, 2009 at 9:10pm
I love Jolie, her private life have nothing to with this ppl, The African nations need to talk about and need to be change, am so heart broken to see the condition of Sudannes, darfur, congo, ... are living, Genocide and circusicion, poverty, faminine, corruption need to be STOP! And if anyone can make a change or difference I believe is President Obama. I hope this will cause more dialouge.

Comment by Natty Nel on December 13, 2009 at 7:38pm
She has a point something should be done abt Darfur, however the African continent needs to learn to handle trouble that is in their own back yard. America need not be responsible for the world. And I am glad that a lot of people knows no colour boundaries.

Comment by mohammed sakoor on December 13, 2009 at 2:39am
I like what she said and I agreed with her and I like the president but right is right and wrong is wrong the need to step up and do some thing about Darfur he talk the talk but he is not doing walk.