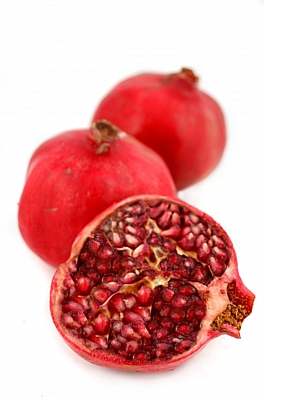 New research shows that pomegranate juice may help to reduce blood pressure. The findings will be presented today at the 2011 Society for Endocrinology conference in Birmingham, UK.

The ratio of cortisol to cortisone in the urine also dropped after a week of pomegranate juice consumption (1.81 ±1.24 to 0.82 ±0.56, p=0.009). Cortisol is an active steroid hormone, produced from cholesterol in the adrenal glands, which affects glucose and fat metabolism and can increase blood pressure by altering salt and water balance in the kidneys and colon. In contrast, cortisone is an inactive metabolite of cortisol which exerts no known physiological actions. The inter-conversion of active cortisol and inert cortisone is mediated within organs such as the liver and kidneys by enzymes called 11β-hydroxysteroid dehydrogenases. The decrease in the urinary cortisol to cortisone ratio suggests that compounds present in pomegranate juice may have modified cortisol-cortisone metabolism by these 11β-hydroxysteroid dehydrogenase enzymes.

This is the first time that pomegranate juice has been shown to have a positive effect on blood pressure both before and after exercise. However, this was only a small study on healthy volunteers and the findings need to be validated by a larger trial.

Researchers at the University of California, Riverside (UCR), have identified components in pomegranate juice that seem to inhibit the movement of cancer cells and weaken their attraction to a chemical signal that has been shown to promote the metastasis of prostate cancer to the bone, according to a presentation today at the American Society for Cell Biology's 50th Annual Meeting in Philadelphia.

The researchers in the UCR laboratory of Manuela Martins-Green, Ph.D., plan additional testing in an in vivo model for prostate cancer to determine dose-dependent effects and side effects of the two components.

In previous studies, Martins-Green and her research team used a standardized concentration of pomegranate juice on two types of laboratory-cultured prostate cancer cells that were resistant to testosterone.

Resistance to the hormone indicates a potentially strong metastatic potential. The researchers noted not only increased cell death among the pomegranate juice-treated tumor cells but also increased cell adhesion and decreased cell migration in those cancer cells that had not died.

"This is particularly exciting because we can now modify these naturally occurring components of the juice to improve their functions and make them more effective in preventing prostate cancer metastasis," said Martins-Green.

All Natural Pomegranate Drink Here why not stop the cancers & other sickenesses if you can?