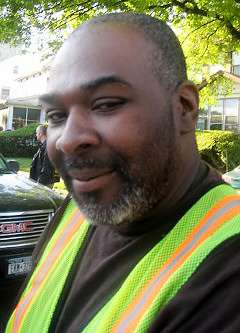 His picture was on the most-wanted list for more than a decade, but fugitive robberCalvin Inswoodis getting a new mug shot. After a tip from an "America's Most Wanted" viewer,Brooklyninvestigators nabbed the 47-year-old crook this week, ending his life on the lam.
Inswood, who beat a murder rap in Brooklyn in the 1980s, was convicted of a robbery but accidentally sprung fromRikersin 1994 while awaiting deportation to his nativeJamaica.
He landed on theU.S. Immigration and Customs Enforcement's most-wanted list and was spotlighted several times on "America's Most Wanted."
The whole time, he was living inNew Jersey, where he raised two children with a girlfriend. He laid low, but didn't exactly leave behind his violent past - which includes a dozen arrests.
The Brooklyn DA's squad got a tip he was working as muscle for a local laborers union, threatening job sites if they didn't hire certain workers.
"He was still a thug, a thug who thought he had gotten away with everything - until now," a law enforcement source said.
Investigators assigned to the Brooklyn District Attorney's office, along with immigration andSecret Serviceagents busted Inswood Tuesday inEast Orange.

Comment by Andrea Brown on May 26, 2009 at 10:13am
oh well some people does not deserve second chance because he knows he is wanted but he choose to be a thug guess he was not thinking about his kids so to hell with him these are the people who make the world think that all jamaicans are monster when we are not