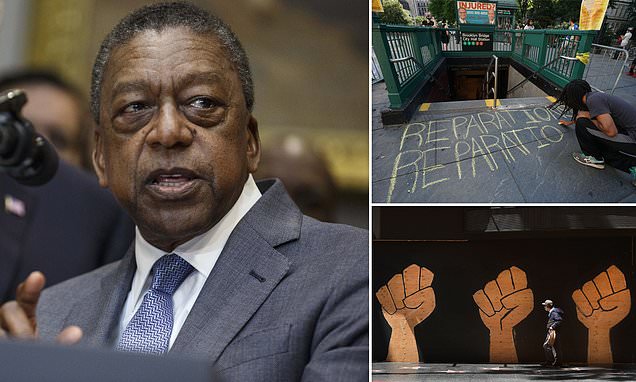 America's first black billionaire says recent talk of Critical Race Theory and Black Lives Matter protests aren't enough to make up for past injustices against black people: He's reiterating his call for $14 trillion in payments to the descendants of slaves - including himself.

'If you're a successful black business, the idea is you've had enough,' Johnson told Vice in a recent interview. But no one would ever say that to a wealthy white business owner, he said.

His call comes after a year of Black Lives Matter-centered protests in the wake of George Floyd's death and a national conversation over Critical Race Theory, systemic racism and other related matters.

But the BET founder, 75, says none of that is enough. It's still necessary to for the government to pay the descendants of slaves direct cash payments.

'That's what's happening to the reparation - it's been cut up into small pieces of things that look and feel like, "We want to end systemic racism, we want to end police brutality and shootings and to provide financing to black small business owners," Johnson said.

'And then people can say, "Well, we really don't need reparations because when you put all of these things together, it's reparations."

The country needs 'one big bill' and needs to 'stand up and apologize,' he said. As it is, 'you're not asking people to pay out of their paychecks' to fund reparations. 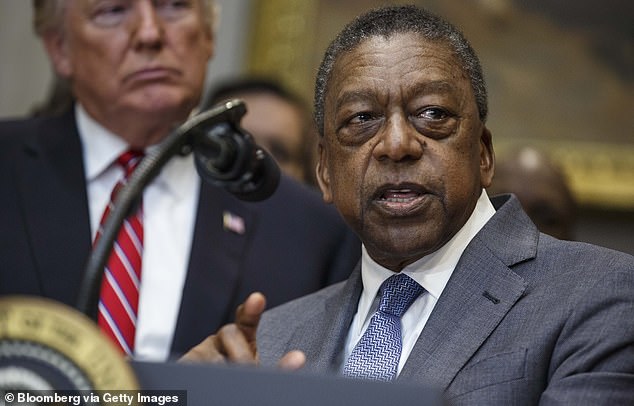 Robert Johnson, founder of BET and American's first black billionaire, continues to call on the government to cut reparations checks for 40 million descendants of African-American slaves 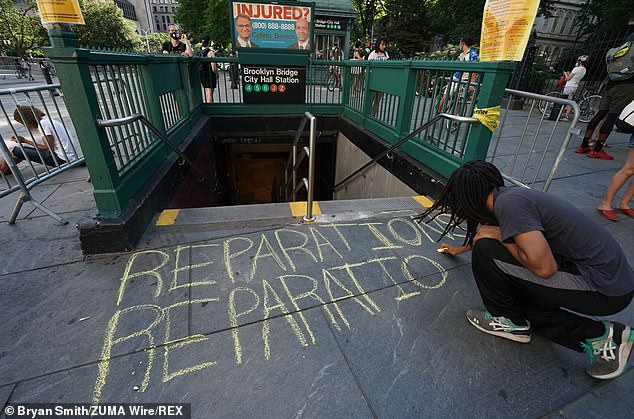 Johnson has said that the move would tackle the vast wealth gap between black and white Americans that he says can be traced back to the slave trade.

'You want a big idea: white America, what would happen if you said, "please forgive us and accept our apology. And by the way, we think we owe you what was taken from you for over 300 years of slavery, Jim Crow, segregation and denial of economic opportunity and rights,"' Johnson told Fox News last year.

'Reparations had two components: The first was atonement, and the other was monetary,' he told Vice in an interview this week, reiterating the call. 'With no doubt whatsoever, it was supposed to come from the government representing the people of the country. It was reimbursement, or recompense if you will, for the harm.'

The businessman said the plan is 'simple math' with the $350,000 being the average personal net worth of a white American family, taking into account factors including home ownership and income.

This figure currently dwarfs the average personal net worth of an African-American family in America, which is around ten times lower at $30,000, he explained.

Government reparations, Johnson believes, would narrow the wealth gap between white and black people and it shouldn't be a charity, but rather an investment program.

The money would come from taxes because it is the 'responsibility of the nation' and all wealth circulating in the US today can be traced back to the slave trade.

'Reparations is a debt owed by the nation as a whole because all of the wealth that was taken from slaves. Free labor is a transfer of wealth,' he explained to Fox.

Despite Johnson's accumulated wealth and success, including owning several homes, heading an asset management firm and becoming the first black person to have a majority stake in an NBA Team (the Charlotte Bobcats), he said he other wealthy black megastars like Oprah Winfrey, Michael Jordan and LeBron James should be given checks as well, he said.

He told Vice that he and the other wealthy black Americans are just as deserving, because they have a proven track record of investing money and getting returns.

'No one ever asks if [a white-owned business] is too rich to benefit from investing in a football stadium' or receiving other benefits like preferential tax treatment or liquidity injections from the Federal Reserve.' 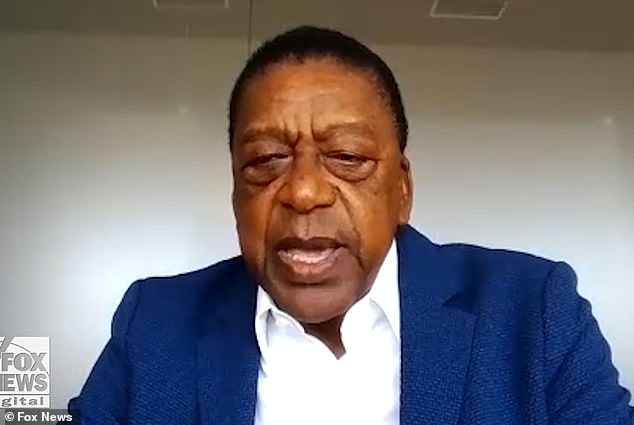 Johnson, pictured here during a December 2018 speech , said he and other black, wealthy megastars like Oprah Winfrey deserve the checks because reparations are an investment - not charity - because there's a proven track record of investing money and getting returns 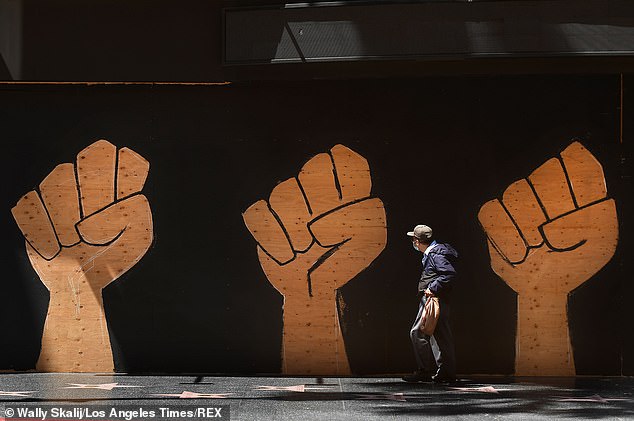 A conversation on race has been ignited around the country, like where this Black Lives Matter street art is painted on a wall in Los Angeles 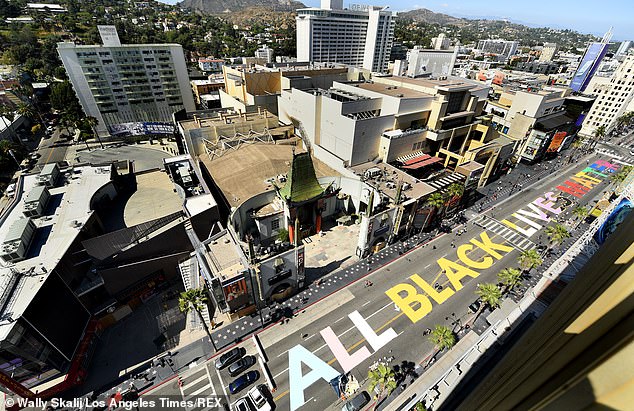 The idea of government-issued reparations for slavery is still a longshot, but it's made more progress this year than in the last three decades.

For the first time since it was introduced in 1989, a bill to set up a Commission to Study and Develop Reparation Proposals for African Americans Act passed out of the House judiciary Committee.

The bill - known as HR 40 - would establish a 13-person commission to study whether the descendants of slaves should receive compensation from the U.S. government.

There's no guarantee the legislation will make it to the House floor - or would survive that vote, as the Democrats hold an extremely narrow majority.

There's even less of a chance it would make it through the Senate, as 10 Republicans would need to sign on to make it filibuster-proof.

When Johnson brought this proposal up last June, Senator Mitch McConnell, told Fox that 'I think we're always a work in progress in this country, but no one currently alive was responsible for that, and I don't think we should be trying to figure out how to compensate for it.'

The House Judiciary Committee voted in April to advance HR-40 out of committee in April.

It would establish a 13-person commission to study whether the descendants of slaves should receive compensation from the U.S. government.

There's no guarantee the bill will make it to the house floor, but it's the first time since 1989 that the bill has passed out of committee.

An estimated 40 million black Americans could receive some sort of payment to the tune of trillions of dollars.

The move came a day after President Joe Biden reiterated his support for the study during a meeting with leaders of the Congressional Black Caucus. 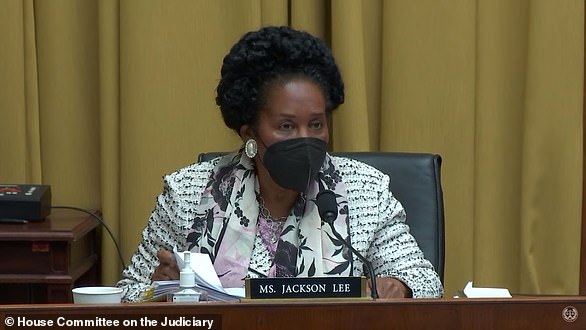 Rep. Sheila Jackson Lee is the primary sponsor of the reparations bill that is expected to get a vote in the Judiciary Committee on Wednesday 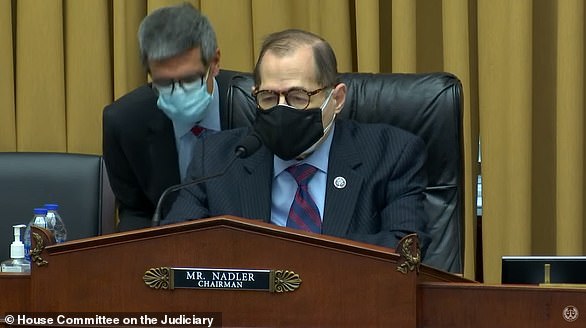 Judiciary Committee Chairman Jerry Nadler presides over a markup session on Wednesday that includes H.R. 40, which creates a commission that would study giving reparations to the descendants of slaves

'We did bring up the issue of reparations,' Rep. Sheila Jackson Lee, the resolution's primary sponsor, told reporters outside the White House at the conclusion of the meeting. 'We have heard not only from the president, but the White House and his team, that he is committed to this concept.'

'We are grateful for that,' she added.

Lee noted that the vote would be the first time the reparations bill will be marked up and potentially make it through committee.

There's no guarantee the legislation will make it to the House floor - or would survive that vote, as the Democrats hold an extremely narrow majority.

There's even less of a chance it would make it through the Senate, as 10 Republicans would need to sign on to make it filibuster-proof.

The resolution to study reparations was first introduced by the now late Rep. John Conyers in 1989 and was named after the '40 acres and a mule' that freed black Americans had been promised, but the federal government didn't act on. 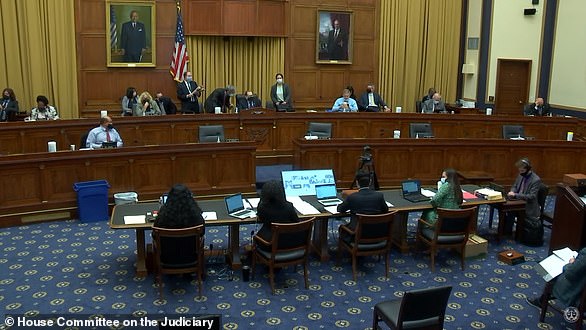 Wednesday's Judiciary Committee vote would be the first time a reparations bill gets marked up and voted on. The resolution to study reparations was first introduced by the now late Rep. John Conyers in 1989

In a House Judiciary subcommittee hearing on the bill in February, witnesses provided the historical context for reparations - pointing out that government had paid them before.

Kathy Masaoka, co-chair of the Nikkei for Civil Rights & Redress, spoke of the reparations given to interned Japanese Americans, and also noted that the commission hearings - which H.R. 40 would green light - helped the healing process in the community.

North Carolina Democratic Rep. Deborah Ross spoke about how her state paid out reparations to those who were forcibly sterilized by the government.

'I don't believe that this particular resolution prescribes a way of going forward, but it's a conversation about what we need to do,' Ross said. 'And just as we did in North Carolina, when we passed a bill compensating people for forced sterilization, a terrible, terrible chapter in our history.'

More recently, Evanston, Illinois became the first city in the country to approve a reparations plan to help black resident who were hurt by the municipality's housing laws.

The plan has a narrow scope and would give $25,000 in grants to black residents or their descendants who lived in the city from 1919 to 1969 and suffered from housing discrimination.

Residents who suffered housing discrimination after 1969 at the hands of the city are also eligible for the money.

The money can be used to help buy a home, pay down a mortgage or for home improvements.

In 2019, Evanston approved a $10 million reparations fund, with the money coming from legal cannabis sales. An initial $400,000 was set aside for the housing reparations.

Republican witnesses at the February hearing argued it could be difficult to figure out a scope of who would benefit.

'Where would the money from from? Does it come from all the other races except the black taxpayers? Who is black? What percentage of black must you be to receive reparations? Do you go to 23andMe or a DNA test to determine the percentage of blackness?' asked former National Football League player Herschel Walker, one of the GOP witnesses.

Comment by vaughn mitchell on July 1, 2021 at 5:27pm
It will be a cold day in hell when that happen, they trying to ban certain history taught in schools. Slavery, mistreatment of black people and native Indians.

I appreciate your work. Your article is very interesting and I must say you have done an incredible job. I think this is one of the most active blogs I have come across.