Al Qaeda calls for attacks inside United States!!!! Sombody get him some Blueberry ASAP!!! An a Chronixx Album !! 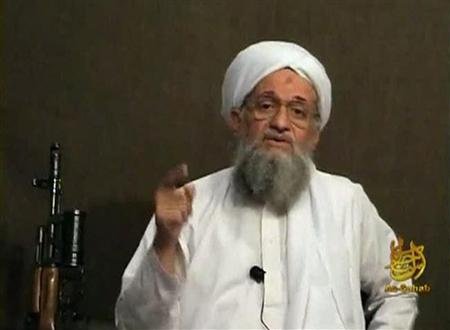 DUBAI (Reuters) - Al Qaeda leader Ayman al-Zawahri urged small-scale attacks inside the United States to "bleed America economically", adding he hoped eventually to see a more significant strike, according to the SITE monitoring service. In an audio speech released online a day after the 12th anniversary of the 9/11 strikes, Zawahri said attacks "by one brother or a few of the brothers" would weaken the U.S. economy by triggering big spending on security, SITE reported. Western counter-terrorism chiefs have warned that radicalized "lone wolves" who might have had no direct contact with al Qaeda posed as great a risk as those who carried out complex plots like the 9/11 attacks. "We should bleed America economically by provoking it to continue in its massive expenditure on its security, for the weak point of America is its economy, which has already begun to stagger due to the military and security expenditure," he said. Keeping America in such a state of tension and anticipation only required a few disparate attacks "here and there", he said "As we defeated it in the gang warfare in Somalia, Yemen, Iraq and Afghanistan, so we should follow it with ...war on its own land. These disparate strikes can be done by one brother or a few of the brothers." At the same time, Muslims should seize any opportunity to land "a large strike" on the United States, even if this took years of patience. The Sept 11, 2001 attacks, in which hijacked airliners were flown into New York's World Trade Center, the Pentagon in Washington and a Pennsylvania field, triggered a global fight against al Qaeda extremists and their affiliates. Almost 3,000 people were killed in the attacks. In his audio speech, Zawahri said Muslims should refuse to buy goods from America and its allies, as such spending only helped to fund U.S. military action in Muslim lands. He added that Muslims should abandon the U.S. dollar and replace it with the currency of nations that did not attack Muslims. Zawahri spoke approvingly of one of the worst attacks on U.S. soil since September 11, 2001, the bombing of the Boston Marathon in April, which U.S. authorities say was carried out by two ethnic Chechen Muslim brothers. The attack killed three people and injured 264. Zawahri sought to paint the bombing as part of al Qaeda's violent transnational campaign of jihad or holy war against U.S. interests, even if it was relatively small-scale. "The Boston incident confirms to the Americans ... that they are not facing individuals, organizations or groups, but they are facing an uprising Ummah (Muslim community), that rose in jihad to defend its soul, dignity and capabilities." "What the American regime refuses to admit is that al Qaeda is a message before it was an organization," he said. Zawahri, suspected by many security specialists to be living in the Pakistan-Afghanistan border area, added that the al Qaeda message simply was that if Muslims wanted to live in dignity and "be liberated", then they had to defend their dignity. (This story has been corrected to fix date of attack in paragraph eight) (Reporting by William Maclean; editing by Mike Collett-White) ..

Thumbs up Fedora McClaren! You're on the right track.

Comment by Fedora McClaren on September 15, 2013 at 2:36am
The government funds everyone and then turns their back on those same everyones when they are not able to get what they want...

Comment by gina gene on September 14, 2013 at 11:02pm
Im so sick & tired of those crazy ass mutha f******!, they dnt like the mother fkng USA then dnt fkng come hete or visit!, why hate Americans bcuz u lack in what we have!!!!, & Im tired of the f****** Govt. approving these crazy bastards of opening up every damn store on the sane block. The damn govt isnt paying attention or queuustioning

Comment by Dexter on September 14, 2013 at 6:20pm
Hahahaha @Carribeanrose, trust me, Obama don't play. In his 1st year in office, they took out more al qaeda than baby shrub did in his last 7yrs in office. One they lock sights on dude here, he'll get vaporized like the others

send a drone and kill his Al Qaeda ass

Comment by Dexter on September 14, 2013 at 10:47am
The thwarted 2009 plot by three former high school classmates from Queens to set off bombs in the subway system. One of the plotters, an Afghan immigrant named Najibullah Zazi, tipped off the the NSA when he emailed an Al Qaeda opperative. Zazi had moved out of NY to work on his bombing plan because of Ray Kelly's & Bloomberg's counterterrorism program & if it wasn't for him screwing up & sending that email, he wouldve been successful.

On Wednesday 9/11, I had to go across the George Washington Bridge into NY. Wasn't looking forward to that @ all. These subways & bridges are all potential targets.

I was in NY when the towers were hit. I was delivering a load of steel to a construction site that morning. After the attack all bridges & tunnels were shut down. There was no escape from NY. I pulled into a big parking lot on Sunrise Highway near Valley Stream Mall & it didn't take long for the lot to fill with other trucks that couldn't get out of NY either. Some had TV's that they brought out of the trucks & we watched the events unfold. It was until around midnight that they opened the tappanzee bridge when I was able to get out of NY.

These folks are still plotting these attacks & part of their hatred for the U.S. stems from the U.S.'s imperialistic status with the U.S. feeling like its the world's police. Also with the collateral damage from drone strikes that are killing women & kids, more hatred for the U.S. Is born.