After enduring months of lockdown, Africans in China are being targeted and evicted from apartments {VIDEO} 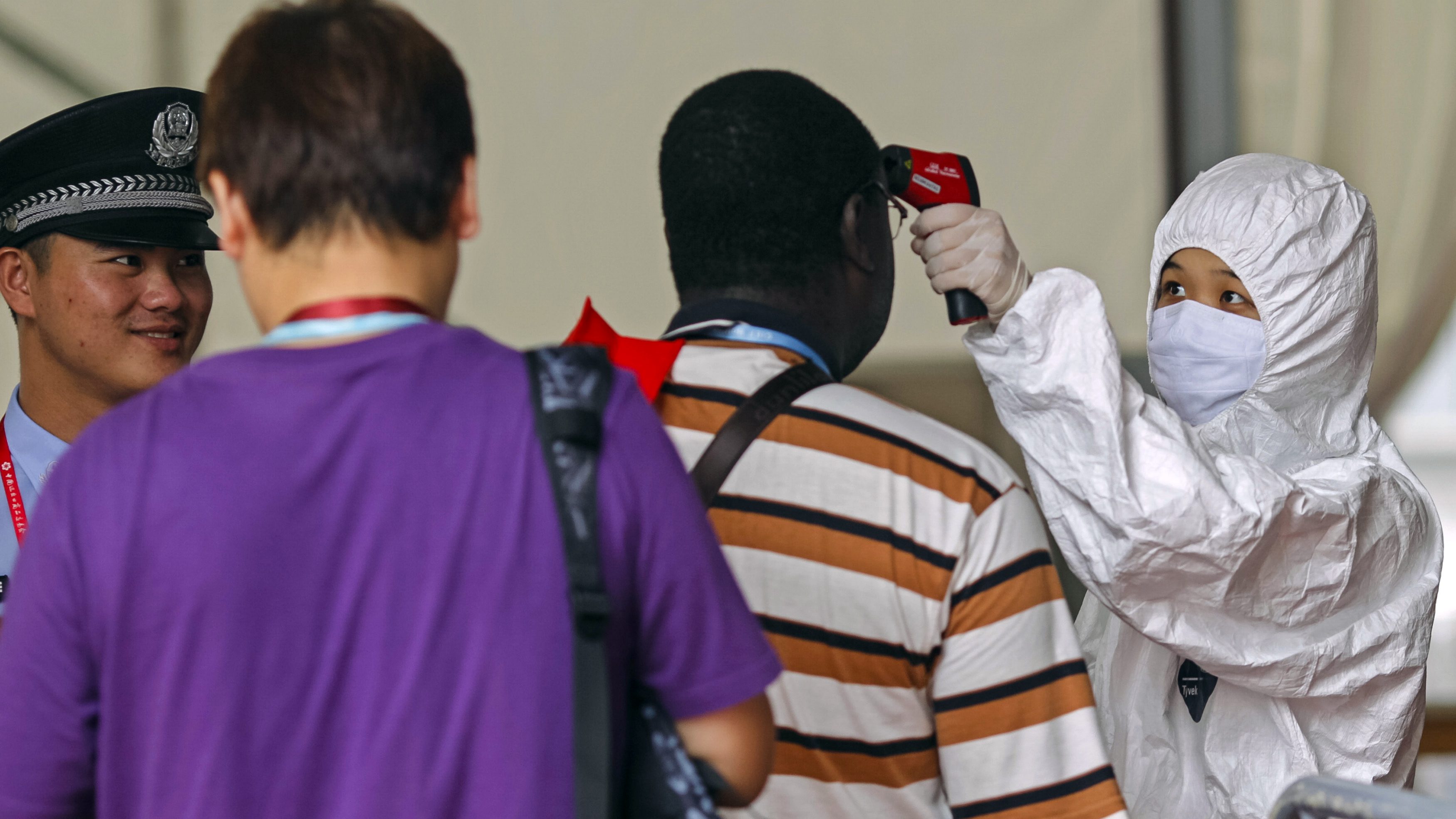 People have their temperature taken at the entrance of the Canton Fair in Guangzhou during the Ebola crisis in 2014.

Across African capitals, Chinese ambassadors are being hauled over by foreign ministries to explain horrid scenes that have gone viral on social media platforms of African migrants being evicted from apartments and refused entry into hotels.

The videos have enraged governments and citizens back home.

The incidents have sparked a diplomatic race row with the African Union, various African governments and even the United States all putting pressure on Beijing over the reported treatment of black migrants, who are predominantly from African countries. Ghana, Nigeria, Kenya and Uganda are among those that have asked for explanations from the Chinese government.

“I don’t know where I will sleep tonight,” a man from Ghana says in a nighttime video, luggage strewn on the streets. “We are Nigerians, Ugandans and Ghanaians; we are stranded now.”

On Saturday, the front page of Kenya’s Nation newspaper read: “Kenyans in China: Rescue us from hell”.

Authorities in China have been relaxing the stringent lockdowns and other restrictions to movements imposed earlier this year because of the coronavirus outbreak. Wuhan, the Chinese city where the virus was first detected, lifted a 76-day lockdown this week, allowing residents to leave the city for the first time since Jan. 23.

Even though the worst of the coronavirus is behind it now, authorities fear imported cases could cause a second wave of the outbreak.

While many African students and other migrants were keen to leave China at the start of the outbreak, many others decided to stay and take their chances on the Chinese health authorities being best placed to cope with the outbreak than the underfunded health systems in their countries.

But this week, five Nigerians reportedly tested positive for Covid-19 in the southern city of Guangzhou. According to state media, the men broke quarantine and frequented a restaurant where they infected its owner, who then passed the virus on to her eight-year-old daughter.

These reports seem to be what has sparked  the current wave of suspicion and anti-foreigner sentiment in the city. “I’ve been sleeping under the bridge for four days with no food to eat… I cannot buy food anywhere, no shops or restaurants will serve me,” a 24-year-old student from Uganda told the AFP news agency.

Even those who have not left China since the outbreak began have also been forcibly tested, moved into quarantine or evicted from their apartments.

A Chinese foreign affairs ministry spokesperson tried to play down reports of Africans being singled out and said the government was paying “high attention to the occasional incidents and misunderstandings in this process” of stopping a second wave and urged all foreign nationals to comply with directives by local authorities.

However, according to statistics published by Chinese state media this week, Britons, Americans and Filipinos, not Africans, account for more than half of foreigners living in Guangzhou who have the virus. But there are no indications, they have been subject to evictions.

China’s third-largest city is renown with African business people because it is a trading hub and they can easily access cheap goods to be exported to the continent. This has made Guangzhou the most popular destination for flights emerging from Africa. The trading district of the city is now nicknamed ‘Little Africa’. Over the last decade it has become home to one of the largest African communities in Asia.

While Guangzhou has been the main city for the reports, local media in Ghana have also reported similar accounts of Ghanaians being evicted as far away as Beijing.

Ghana, Kenya, Nigeria and Uganda are among the countries to summon China’s ambassadors, along with the African Union Commission, to register their displeasure about the reports privately and at times very publicly. The US State department has also ramped up the scrutiny of happenings in Guangzhou with a warning to African Americans to avoid travel to the city.

Beijing can ill afford a diplomatic scandal about its treatment of people of other races especially after it vehemently complained about the racist language surrounding commentary on the coronavirus, which has variously been called “Wuhan virus” or “Chinese virus”.

China will be hoping its “coronavirus diplomacy” of massive donations of equipment and cash would be part of a broader strategy to help deflate some of the blame and divert attention from the origin of the virus.

Instead of the story being about Chinese generosity and its efforts to end a pandemic, it is now hoping to quickly quell anger among some of its most important allies on the African continent.

Mr1stroke and Yasmin, you both are so right.

Comment by mr1stroke on April 16, 2020 at 12:16am
One thing they will not do is kick them out, negros work for every one else but their selves, they own nothing they brag about having money but too busy spending making every one else rich so they are in no position to kick they Chinese or any one else out, so the rest of you can save your breath, if you disagree please wake me up when that happen, or may be you can come up with a better solution

Oh well what the hell they living in china for anyway Chinese hate Africans just like they are racist toward Black Americans go back to your own country and kick them out.

Well, you lie in bed with communist, this is the outcome.

Get out of their country and get them out of you country.  They are not needed.  It's corruption that got them in.

Comment by mr1stroke on April 15, 2020 at 12:49am
It does matter where you go as long you have that fark complexion you will never be at peace, some try to act white, marry white or even kiss up to other races to fit in and be special but still being treated like always, so china is no different from a white person, negros are the only one who kisses up to other races but dont realize every one are racist toward blacks, even people of color discriminate against each other, so no big surprise, until you embrace your own and take back whats yours you are no used to any one once they are done with you

Comment by vaughn mitchell on April 14, 2020 at 11:52pm
I saw the videos on YouTube, then started sharing them. China, is definetly racist. I am waiting to see if Kenyan, Nigeria, and Ghana, kick them out if their country. Why is Africans there in the first place?

These people are racist AF!