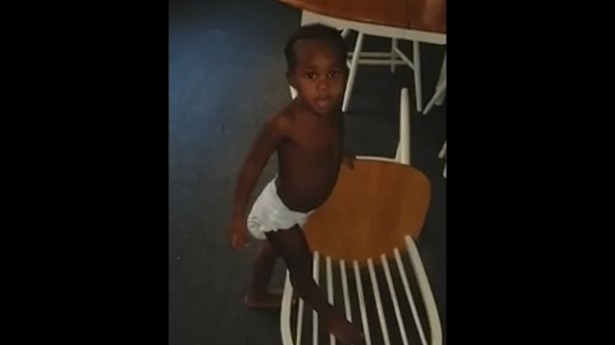 The Omaha Police Association is being accused of race baiting after posting a video on it's website showing an African American toddler cursing, giving the middle finger and talking about gangs.

The clip was shot by some parents who don't seem to have any idea how to appropriately raise a child. At least three adults can be heard encouraging the toddler to misbehave by calling him a b*tch, talking to him about sex and asking him "what hood you from blood?" 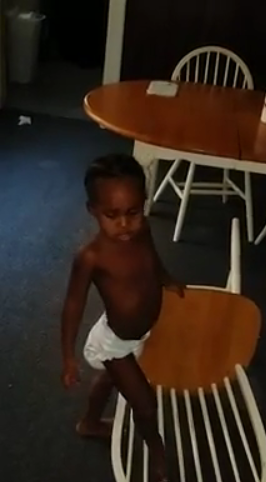 The video was originally posted on Facebook by the child's uncle. The Omaha police were alerted to it by a citizen who was appalled by it.

In a post entitled "The Thug Cycle Continuing," the police explained that the video might make some people upset.

We here at OmahaPOA.com viewed the video and we knew that despite the fact that it is sickening, heartbreaking footage, we have an obligation to share it to continue to educate the law abiding public about the terrible cycle of violence and thuggery that some young innocent children find themselves helplessly trapped in.

Toddler being encouraged by adults to talk about sex, curse and more

There are a lot of new developments to report in this case. The 2-year old boy in the video has been taken in by child protective services, along with his 16-year old mother, a 12-year old and another toddler. A 15-year old boy would be with them, but he's being held in juvenile detention for a gun charge. 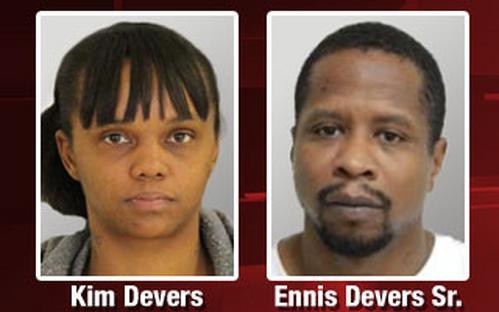 The 12, 15 and 16-year olds are the children of Kim Devers and Ennis Devers Sr. The 2 toddlers are their grandchildren. Kim also has a 19-year old daughter, Kierra Johnson, from a previous relationship.

Kim is currently in police custody awaiting trial on gun charges from December 2013. Ennis is in prison on gun and drug charges.

All of the youths were left in the care of Johnson when her mother was arrested.

The state has been watching the troubled family since August 2013. KETV is reporting that 4 people in the home, including the toddler seen in the video, were injured when a man approached the front door in October 2013, and began shooting.

The 16-year old mother was shot in the shoulder, her son was hit in the foot by shrapnel. There is no information on where the other 2 people were shot, but everyone survived.

2 days before the Facebook video was posted Johnson went to a caseworker to get help because she said she was having problems with the relative who posted the video.

Because of that and the ongoing threat of gang activity in the home the state finally moved in and took the children into protective custody, including Johnson's child.

Comment by Big Shot... on March 3, 2014 at 2:41am
Well, to the class:
I feel both problems are are very bad and both parties are dead wrong to sum it up. Those police were completely out of order to make something like that public. It was racist, mean and spiteful. The intent was to attack black people on a whole. It was foul. This is the ol "Look world, this is how they raise their children, this is their house holds", (feeding into all stereotypes thats negative) thus giving them an excuse to treat us the way they do any time they do. This gets into the mind of people especially white people that we deserve being mistreated. They didnt have to put it out there like that. They couldve investigated it or simply made the necessary reports and then follow oit up with the Child Protective Services like they did anyway. There was no reason to glorify the child abuse in this way.

As for the parents: These people are very troubled folks. theres craziness going on all around them. The parents and the 16y-o son is locked on gun charges? That means they are all out of control. The parents are children too... This ignorant situation in reality just saved this baby's life, looking at the way things were around there. That child at least NOW has a chance for a better up bringing even though it maybe with out his biological parents.

THESE CARETAKERS ARE WORTHLESS.  THEY ARE NOT WORTHY OF BEING AROUND ANY CHILDREN.  GOD PLEASE SAVE OUR PEOPLE!!!!

This is further evidence of how messed up some black people are culturally to a point where their ignorance renders them almost in a savage like state. I hate to admit it but it's true. And white people luv to ridicule the most ignorant amongst us and will do so at every opportunity. This can't be helped as they were made in opposition to us. And they envy/hate us for it. All because they were made colorless and envious that the sun could be their natural enemy.

Comment by Ruff de Gehto Travler on January 14, 2014 at 9:24am
I did a party one time back yard BBQ little baby dressed in all red lets say 2yrs old actually throwing gang signs screaming Brim blood n**** , I looked to the left at my DJ peeps and every one thought it was the cutiest thing !!! There denying there child a choice to a normal life !!! Other day went over to my friends crib and they smoken weed right in the room with a 5yr old drinking and cursing and they see nothing wrong with it !!!! My sons are 21 and 19 and they only seen me drink twice but they know I drink !!!! These kids are doomed!!!

Comment by Vonnetta Fowler on January 13, 2014 at 10:40pm
The damage is done, now what? People always have opinions and do nothing about but complain on social media. Don't talk about it, be about.

Ruff de Gehto Travler & Mz Nini you both summed it up to what i was trying to amplify to all. It is easier to find fault with others instead of looking at our own. If not for the poor judgement of the child’s caretakers, starting with the child’s mother “ child giving birth to a child with no real parental knowledge  and the poor excuse of a father, Lord knows what was going on in that dwelling where they all resided. Some of us are glad that video did come out bring to light how children are being taught the thuggish life style. I personally did not believe this type of conditioning existed within our community. I always thought these kids learned that thuggish lifestyle on the streets how wrong I was. Than there are others whom are so ashamed they want to find blame for the posting of this video Mz. Nini said it best “ The danger is the family members, not the cops!”  “Let us focus on the outrage before the police got a hold of the video”  If we can correct our own we would not have to worry about what the police post. I guess we can also blame the police for posting of those little darlings that’s knocking out old people and think it’s funny. Where does it stop.

Comment by Vonnetta Fowler on January 13, 2014 at 10:14pm
I seen nothing wrong that the cops did iftthe caretakers posing these crazy things why is it wrong that police did? It was there for millions of people to see, what's the difference. The main point is to reconstruct the child's mind before the police take him from this world. Sick parents a their raising children wrongfully.