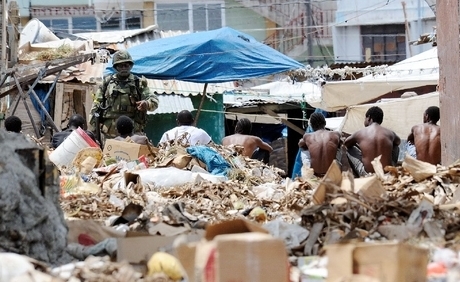 Colourful retired Senior Superintendent of Police Reneto Adams has called for the security forces to expand their operations to 80 other communities in Jamaica, which, he says, are besieged by criminal gangs.

"I want them (security forces) to stay in Tivoli, Arnett (Gardens), Mountain View, Olympic Gardens, Spanish Town. I want them to stay as long as possible. Then, we should invite civil society to come together to reorientate or orientate these people, because they have been trained to hate the Government, the Church and the police," he said.

He also wants a command post to be established in the centre of Tivoli Gardens for the foreseeable future.

Adams, who served in the Jamaica Constabulary Force for 41 years, said he had foreseen the latest stand-off between the security forces and criminals in west Kingston.

"I saw criminal organisations implemented with the complicity of some politicians on both sides, the private sector and other people. I have seen criminals spread their crime all over the island in a deliberate manner," he said.

Adams was himself involved in a July 2001 police operation in Tivoli Gardens, which claimed the lives of 25 persons. Adams, at that time, received sharp criticism from various sectors of society, which decried his policing tactics.

In that attack, the ex-crime fighter had prophetically declared that Jamaica "will pay dearly" for the entrenchment of thugs in Tivoli.

He says that the build-up to the latest situation and the aftermath have left him feeling "highly vindicated" about his position that the west Kingston community was a hotbed of criminality. He is not asking for an apology from his detractors, however.

"I am not demanding it. If they are contrite in their hearts and said they hoped they had supported and cooperated with me when I went there and was not blinded by politics, and that they need redemption, then I will guide them," he said.

Comment by D on May 26, 2010 at 9:11pm
I read your comment London and it only shows that you have a one track mind, probably was raised with a blindfold over your eyes. I hope you see things as they really are. If you are going to honestly say that Jamaica doesn't have alot of problems to deal with and Mr Adams approach is not a step in towards another path then I feel sorry for you

Comment by D on May 26, 2010 at 8:38pm
lolololol dr ray............THANK YOU!!!!! that guy's crap music has been annoying me for some time now, it has become so unbearable to be reading something and then all of a sudden hear his music to rush and turn it off. Once again thank you, I hope he gets the message. I would love to copy an paste your message on every post where he has his music.

Comment by Dr. Ray Blanchette on May 26, 2010 at 7:51pm
@Sufferahsmusic I find your music promotion offensive and insulting to myself and the serious people who choose to read these post on Caribbean Fever. You pretend to have interest in the blog post discussion, but you're not concerned or interested at all. All your doing is promoting your crap music on EVERY SINGLE DAMN POST. STOP IT. I don't want to have to turn your S*** OFF every time I read a post. People are reading about and addressing very serious issues and are expressing heart felt opinions THAT AFFECT A GOOD MANY OF THE READERS HERE and there we have you promoting your GARBAGE. Get your own network, or website, or WHATEVER and promote your s*** there. Your're like a damn phone call that nobody wants to answer. Can't you take A HINT!

Comment by Byron Supreme on May 26, 2010 at 7:18pm
Adams a no duppy, you a duppy. all you bastards want to destroy jamaica with your illiterate ass hole selves. You love death and destruction, dumb asses. One more thing all you idiots let the politicians use you and your mother to divide and conquer you and your mother ha ha fools.

Comment by Winston Hanson on May 26, 2010 at 5:56pm
Adams you certainly made a strong statement. As a x member I understand the circumstances. However, I would like the situation to be over, and Jamaica can have its place in society once more.