Veteran actor and comedian Ricky Harris has passed away. He reportedly died from a heart attack on Monday, December 26. He was 54 years old. The Long Beach, California native was known as a performer on HBO’s Def Comedy Jam and his hilarious skits on Snoop Dogg songs. In particular his bit as Taadow on the song "Doggy Dogg World." He's prominently featured in the music video.

A visibly upset Snoop paid tribute to Harris in a heartfelt Instagram video.

"Well y'all ... I lost one one of my dear friends today, Ricky Harris," Snoop says in the clip. "A lot of y'all may know him as a comedian, but he was a real dear friend of mine. Ricky Harris, rest in peace ... Long Beach original."

Many may remember Harris for his role in the television series "Everybody Hates Chris." Other acting credits include "Poetic Justice," "Heat," "Dope," "The People v. O.J. Simpson: American Crime Story," "Moesha," "Poetic Justice" and more.

Many of his fellow artists were hit hard upon learning of his death.

Cedric the Entertainer tweeted that he was "devastated."

"Man. Taadow himself man. Dog our FIRST LA show in 94. Ricky Harris showed us so much love man. 2016 man keeps taking and taking and taking. I'm not joking at all when I wonder aloud about is this the rapture happening and maybe my life isn't right and I'm stuck on earth w ol orange crush at the wheel. Do we have the strength to even...hang on? Cause who are we kidding is 2017 all that safe? Hold on be strong y'all. Seriously," Questlove of The Roots captioned an Instagram photo. 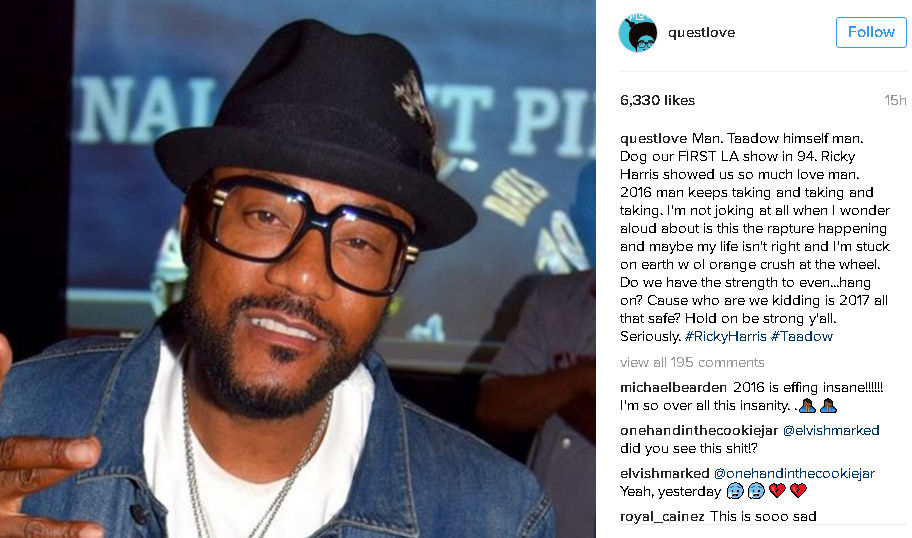 Harris is survived by his mother, ex-wife and two daughters.

He was Cousin Fred in the movie THIS CHRISTMAS.  RIP Ricky Harris

Comment by Star "B" from Brooklyn on December 29, 2016 at 10:30pm
May God continue to Bless and comfort his loved ones as they grieve their loss....

Comment by Ricardo O'Connor on December 28, 2016 at 2:08pm
First It's Jesus Christ and Him Crucified, eat well, and excercise.

Comment by Robert on December 28, 2016 at 6:33am
Brothers go get yourself checked , take that stress test , go check that heart out..

RIP Another artist for 2016