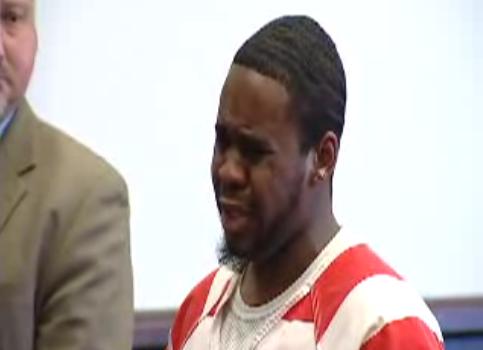 The man who is accused of killing Twinsburg police officer Joshua Miktarian in the summer of 2008 appeared in court on Wednesday, and only Fox 8 News cameras were rolling as Ashford Thompson cried when describing his life in prison.

Thompson, 24, explained to the judge "harassment" that he's had to deal with behind bars, including not receiving mail and having his bed sheets taken away.

While openly weeping, he told Judge Elinore Marsh Stormer that he feels as if he "can't get any kind of justice."

The appearance Wednesday at the Summit County Court of Common Pleas was intended to be a final opportunity for the defendant's new attorneys to file any additional motions. It quickly turned into an opportunity for Thompson to vent.

Thompson originally pleaded guilty to aggravated murder, but later withdrew his plea. The trial is scheduled to begin on May 24.

Prosecutors are seeking the death penalty.

Comment by Divine God on February 11, 2010 at 11:38am
I have mixed emotions but it come to show u that guns and thugs dont set the standard. I dont know what happened in this case but the death penalty was created for black men. Thats the system. Furthermore there are a lot of cops out there that are abusive and when one of them dies i dont see it the same as a citizen dying. Cops get paid to put their life on the line, thats part of thier job. If it happens they get killed doing their duty its part of the system. When one of those corrupt cops kills or abuses an innocent black man or woman they usually walk, get promoted or get a slap on the wrist. If we are part of a corrupt system like the judicial system we have to know that its implicite Lawyers, Cops, Judges, prosecutors. are using the black man like pieces of s*** everyday and go home at night feeling good. They laugh at the brother crying up there but get sad when he offs one of their own but never do they question who or what is causing people to behave the way they do.

Comment by susexful on February 9, 2010 at 11:20pm
people here are cruel...shouldn't be that way. one day you may want someone to presume you innocent to proven guilty. It's not about the crying or him being a punk now..Its about being afforded a fair trial which he is entitled to under the law and letting the judicial process take its course. I dont know his case and I will dare not judge him...no matter what that jury or that judge do, his ultimate judgement can only be given and will go down when he closes his eyes. Be careful what you say and how you act people...could be you, one of your family or friends going through that. I wonder if he'd be a punk and all the names yall are dishing out here.

Comment by Born Into Music on February 8, 2010 at 8:50pm
ALL OF YA'LL TALKING S*** BUT DONT KNOW THE SITUATION......IM NOT DEFENDING HIM BUT I AM NOT COMMENTING CAUSE I DONT KNOW THE FACTS OF THE SITUATION.....JUDGEMENTAL FUCKAS! EVERYONE IN JAIL AINT GUILTY....AS SAID B4..NOT DEFENDING ANYONE BUT I KNOW PEOPLEWHO HAVE ACCUSED WRONGLY AND FUCKAS LIKE YOU GUYS ARE READY TURN ROAST EM B4 YOU KNOW THE FACTS...GETS THE FACTS FUCKAS!

Comment by MrOneLove on February 2, 2010 at 8:37pm
These are the same kind of people that prey on innocent, hard working people, generally people of their own community..I don't feel sorry for him one bit..Crying like a b**** cause he ain't got no bed sheets....

Comment by BabyGirlBubble**JamaicanPrincess on January 31, 2010 at 3:53pm
you have to pay for your own actions..

Comment by Crown on January 31, 2010 at 2:01am
there hard on the streets but puss in jail. i see dudes like that everyday and i cant help but laugh at them.

Comment by BabyGirlBubble**JamaicanPrincess on January 30, 2010 at 8:42pm
This is really sad. People have to think before they act.. just don't let your actions controls you because in the end, the consequences are present. Now he has to be facing the consequences,,