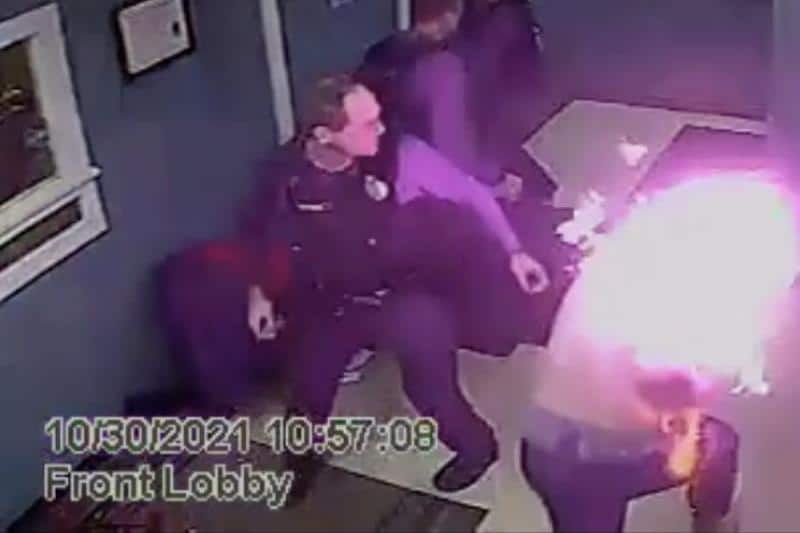 A disturbing video released on Friday shows a man in police custody dousing himself in hand sanitizer before bursting into flames after one of the police officers tased him. The incident occurred at a New York police station in October. Subsequently, the victim was in an intensive care unit for six weeks before dying (on December 15) after being taken off life support at Burn Center at SUNY Upstate Medical University Hospital in Syracuse.

In the shocking footage, the Catskill police station officers are seen running from the lobby as Jason Jones, 29, desperately attempts to extinguish the flames engulfing him with his bare arms. The fire is mainly on his head and other upper parts. He rubs his head and rolls on the floor in desperation. He is on fire for close to 30 minutes and ends up with burns, judging by the redness on his upper parts.

Before he is hit with the stun gun, the 30-minute video first shows Jones pacing around the front lobby unsteadily. He is obviously irritated, going by his gestures as he exchanges inaudible words with two officers. At some point, he pulls off his hooded sweater, rips off a black T-shirt, and removes his shoes and socks as three cops watch.

He then grabs a large plastic hand sanitizer container on a folding table which has been within his reach all along. He soaks his head and back with the sanitizer, a flammable liquid. One of the cops, perhaps to restrain him but without considering the impact, fires taser electrodes at him.

Jones is off-camera when the taser is used, but a sudden bright flash shows there’s an explosion, and he soon comes into view burning. The officers soon return to help stop the fire, but the damage is already done.

According to Police Chief Dave Darling, the Catskill officers were familiar with Jones, having handled him in previous encounters. They tased him to protect him from himself because he was going to hurt himself.

A decade ago, Jones had been a standout track and basketball athlete at Catskill High School, according to The Albany Times-Union.

Sanitizer is such harmful.. yup

Comment by Georg Fabile on January 18, 2022 at 3:16am
Play FNFunkin Unblocked games at school

Keystone cops, if he was Black he would have handcuffed and beaten half to death

Comment by vaughn mitchell on January 17, 2022 at 10:59pm
The dealt with the man before, u see him poring a liquid all over himself, why would you take him. Dumb ducks.

Comment by cheryl on January 17, 2022 at 4:29pm
Hand sanitizer is HIGHLY FLAMMABLE.
These officers already knew that !