A Guy Pulls Out A Gun At A Comedy Club and Hugs Mike Tyson! | WATCH 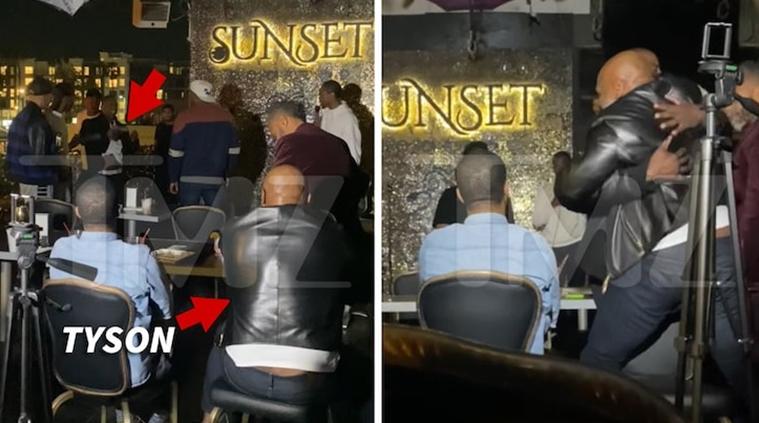 A video obtained by @tmz_tv shows the moment a guy pulls a gun out in front of Mike Tyson and while most people would be terrified at that moment, the boxing legend didn’t seem startled at all! In fact, the chaotic moment ended with a hug

It all happened at a small comedy show Tuesday night on a rooftop bar in Hollywood, and Mike was in attendance with a few friends, a source shared with TMZ. The show was reportedly interrupted by a random guy who approached Mike and attempted to chat him up, completely disrupting a comedian’s set.

Later into the clip, things start to go left as someone tries to get the guy to leave. An eyewitness told the news site that the man was actually challenging Mike to a fight… suggesting he wanted to elevate his “status.” Mike kept his cool while one person tried to escort the guy out. However, that’s when the gun was pulled, shocking everyone except the boxing champ. Thankfully, the guy didn’t shoot and put his gun away. However, he still was bold enough to talk to Mike again and asked him not to call the cops, TMZ reports. Mike, who was still sitting comfortably in his seat despite all the commotion, made the guy speak to him and even embraced him with a hug once he was done talking.

So many people are looking for their 15 minutes of fame. First of all, everyone should have been searched for  weapons before entering the show, even if Mike Tyson was not at the show.

Comment by Willie Ward on March 24, 2022 at 7:58pm
Celebrities are in desperate mode these days....doing whatever for attention...smh