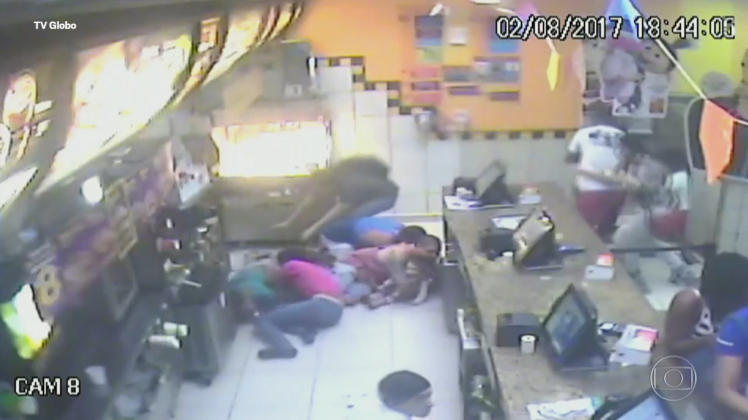 A gang of drug traffickers machine-gunned a McDonald’s after their demand for 40 free burgers with fries and soft drinks was turned down.

Tesco customer left gagging after ‘discovering maggots in dog food’ Shocking footage shows terrified customers, including some with young children, hiding under tables and crouching down behind the counter at the fast food store in the Brazilian city of Rio de Janeiro as they came under attack.

One of the attackers was filmed telling a McDonald’s manager what he wanted before a suspected accomplice repeated his request for free food when his partner-in-crime was turned away.

The gang returned 10 minutes later with machine guns and started firing into the premises in Bonsucesso, north Rio. Police say they have already identified one of the suspected shooters – the man wearing a white T-shirt and black baseball cap in the footage – as drug dealer Michael Faria de Souza, 23, from the shanty town of Morro do Adeus. Two other men suspected of taking part in the attack are also facing charges. 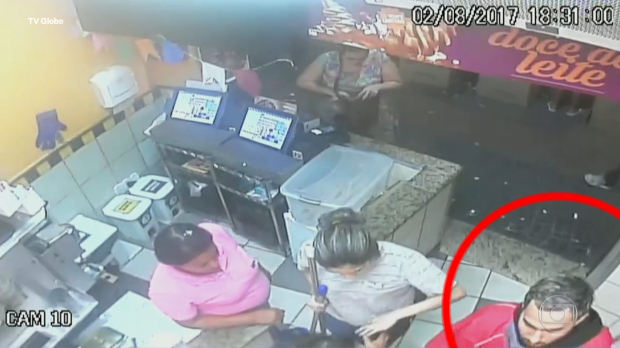 Police chief Wellington Soares said: ‘The other two men were not recognised by witnesses but they are going to face the same charge of attempted murder as the the drugs trafficker who controls the sale of drugs in Morro do Adeus.’ Man drops three-year-old girl from bridge in ‘attempted murder suicide’ The windows of the McDonald’s were left riddled with bullet holes but miraculously no-one was injured. Morro do Adeus is one of more than a dozen shanty towns or favelas that form the Alemao complex – a huge network of neighbourhoods clustered on rolling hills in northern Rio with a population thought to be between 60,000 and 120,000.

Oh sweet Jesus! I'm so thankful no one got hurt. That poor little baby.

Comment by It’s Official on October 1, 2017 at 7:08pm
They didnt have the money because they didn't heed the 'big-worm'.. question..the cashier asked..'I know u not smoking my shyt' lol. I guess no one told them....
You don't get high On Your Own Supply