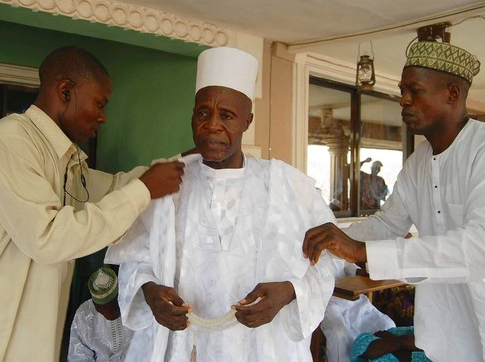 He fell in love with his first wife because she was sincere and eager to please.

His second wife, a cousin, was irresistible because she did everything he wished and nothing he didn't.

"That alone made me love her."

His third wife won him because she submitted to his every request."I saw her, I liked her. I went to her parents and asked for her hand in marriage."

Well, by then — it was the late 1980s — things had taken off for Bello Maasaba, an Islamic faith healer in this city in N**** state. He went from a wedding every few months to one every few weeks.

All told, the 87-year-old has married 107 women, which, even in a society with a tradition of polygamy, is on the high side. The Nigerian government is not amused. Neither are Islamic authorities in the state.

But he's still marrying, every time Miss Right comes along. He now has 86 wives, the youngest 19 and the oldest 64. Nine have died and 12 he divorced (for disobedience).

But how on earth does he…?

To ask the delicate question about how a man with so many wives, well, manages, one first has to cross a dusty street in this hot city in northern Nigeria where the sun bleaches the color from the street. Droning Chinese motorcycles belch choking fumes. Women in flowing garments sit under umbrellas in the market, selling fruit and vegetables.

A looming four-story house with 89 rooms and a broad veranda supported by gold columns overlooks the street with an air of faded grandeur. But its view is inauspicious: an open gutter running from a bank of rickety street toilets, their wooden doors askew.

On the porch, dozens of men are seated, some relations, some followers. They rustle in excitement at the approach of guests. Choruses of "You are welcome" echo like bells as visitors are seated on a red couch beside a large, patterned red rug. The carpet, an island in the sea of Maasaba's followers, lies bare but for one white pillow and one white facecloth.

The pillow awaits. Suddenly, the crowd of males leaps to its feet, bursting into a traditional song of praise.

At the doorway, his long, pointy white shoes are removed by aides and placed in an empty plastic shoe rack tacked high on the wall. Then he rustles in, enveloped by a tumble of shiny white cloth, which the aides spring forward to arrange whenever he stands or sits.

He ignores the pillow and sits beside it. He wears a tall white hat, and smiles a crooked-toothed smile. The pouches under his eyes give him a mournful air. But there's barely a wrinkle on his forehead, and he professes to have no worries.

An aide proffers a microphone hooked up to speakers on every floor of the house so his wives and children can listen. Questions are blasted through speakers over the street so his followers (and anyone happening by) can hear.

Which makes it a little awkward to ask that delicate one.

He begins with his family history, almost singing the story of his roots.

After school, he led an ordinary life for 21 years, involved in the clothing business and later working for a sugar company, keeping just two wives. Life was normal until a religious "vision" in the 1970s, which he says involved a visit from the archangel Gabriel. He fell deeply ill, unable to eat or sleep for days, and all the medicine the doctors gave him only made him worse.

"I get a revelation from God telling me any woman I'm going to marry. If it wasn't from God, I wouldn't have gone beyond two," he explains in a wispy, singsong voice.

Maasaba has to pause to remember the number of children he has: an ever growing figure, with the youngest just 1 month old. He has fathered 185, and 133 are still living. He has acquired an extended family of some 5,000 people, many of whom live in the sprawling compound in the block surrounding his house.

It takes three enormous sacks of rice a day and prodigious quantities of meat and vegetables to feed his enormous clan. He's rich because of the handsome fees paid by those who come to be healed.

Maasaba's many marriages underscore the gulf between modern urban Nigeria and traditional rural towns, where women often have few choices.

Aishetu Ndayako, about 57, clocked in at wife No. 40 or so. She had heard Maasaba was a good man who looked after his wives and solved all the problems of the family.

She was a widow with six children and no means of support when she married him, leaving her children living in her late husband's house.

"There were no problems between the wives. They were all very peaceful. Honestly, we never had a quarrel, not even once," she says. "He loved me. The food was good. He slaughtered a cow so many times. He gave enough money to each of the wives.

"I was always happy in his house. I understood the man. I felt he was sent by God."

But after five years, her children demanded that she return.

"They said no one was with them, and they were lonely," she says. "They asked me, and I felt I should go because of my love for them." After leaving Maasaba's house, she never saw him again.

"I really miss him," she says.

Three years ago, Islamic authorities in N****, a majority Muslim state with Sharia, or Islamic law, ordered that Maasaba divorce 82 of his wives, keeping four. He refused and was ordered by the Sharia court to leave town. (Muslim scholars generally agree that the Koran allows up to four wives, provided each gets equal treatment.)

Disobedience, the trait intolerable in a wife, was his own sin.

"In prison they asked me what was my offense. I said they hate me because I won't do what they want me to do."

Refused bail, Maasaba spent 22 days behind bars, while his wives (11 of them pregnant) demonstrated for his release. In the end, a group of civil rights lawyers came to Maasaba's rescue and had him freed on bail.

That November, at the High Court in the capital, Abuja, the lawyers called in his wives and their parents, one by one, to testify that they had agreed to marriage. At wife No. 57, the court told the lawyers to stop, and ordered Maasaba freed.

Maasaba is unyielding in his refusal to seek medical care, even if his wives or children are dying.

But when a child becomes ill, that can try a mother's obedience.

"I told them not to go to hospital," Maasaba says. "They must report to me and pray. Some of my wives don't have that confidence. They would take them to hospital behind my back. If anyone goes behind my back, the child will develop a swelling in the body and will eventually die."

Some of the wives, wearing bright costumes of pink and blue, gold and yellow, meet visitors to the house in a white-tiled entry room, chorusing hellos. Others, surrounded by a clutch of children, cascade down a wooden staircase and peer curiously around a door.

As Maasaba talks, they are hidden within, listening to the squawking speakers, as the delicate question is finally posed. With so many wives, how does he meet their romantic needs?

He smiles. Everyone asks him that.

"In his wisdom, God has given me the power and strength to give them the sexual portion they need," he says. "If I didn't satisfy them, they would leave."

Then he stands up, and his aides rush to him, putting his white shoes on his feet and arranging his white costume, just so.

Comment by Chocolate¤Silk on May 17, 2011 at 2:14am
Personally, I wouldn't want to be involved in a situation such as this. Its degrading to women, and there goes the slang that has been labeled on Men - they're "dogs!". Well, NOT all men fall into this form of self greed and disgrace to the Laws of God... Keep urself for your wife/girlfriend and husband/boyfriend. I could think of plenty NEW things we could do, and if we want to burn the mid-night oil and go, go, go.... After all babii its you and I, let's get it... Lol

Comment by VonsinaWilliams on May 16, 2011 at 1:19pm
HE HAS TO MUCH POWER." Needs to be knocked down a tad". As they say in the Color Purple.Can we say Slavery. Your right Chocolatesilk.

Comment by Chocolate¤Silk on May 16, 2011 at 2:35am
Simply amazing ppl use God for everything even if the Bible says to do differently! He can't remember names of the wives nor the children, so where is the "I am special" feeling for any of them... Slaves for him, sexually and all! Shooks, he married a cousin, maybe he'll marry a daughter...

Comment by Baku on May 15, 2011 at 10:09am
I guarantee you that 80-90% of those children belong to the followers and assistants who sit around his varandha greeting people!!

@Tessan Allen...you think the two man dem in the picture above a fix him clothes? No, a hole dem a hold him up from dropping ova! Him back nu function anymore. LOL!

Jah prosperity on to you Nubian Empoer