72 Year Old Grandmother Falls In Love With Her Grandson; Now They Are Having A Baby!! 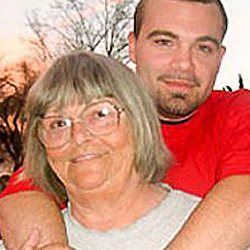 Sky News: Pearl Carter, 72, says she has never been happier after beginning an incestuous relationship with her 26-year-old grandchild Phil Bailey.

new Idea Magazine
The pensioner, from Indiana, US, is using her pension to pay a surrogate mother so they can have a child, reports New Zealand's New Idea magazine.

"Soon I'll be holding my son or daughter in my arms and Phil will be the proud dad."

Her lover is the son of Pearl's daughter Lynette Bailey - who she put up for adoption when she was 18-years-old.

When his mother passed away, Phil tracked down his long lost grandmother and they quickly fell in love.

Pearl told New Idea magazine: "From the first moment that I saw him, I knew we would never have a grandmother-grandson relationship.

"For the first time in years I felt sexually alive."

It was during their second week together, after dinner and wine, that Pearl made her move.

"I called Phil into my bedroom, sat him on the bed, and then I leant over and kissed him," she added.

"I expected rejection but instead he kissed me back."

Phil revealed: "I wanted to kiss her there and then. My feelings were overwhelming.

"I love Pearl with all my heart. I've always been attracted to older women and I think Pearl is gorgeous. Now I'm going to be a dad and I can't wait.

"Yes, we get laughed at and bullied when we go out and kiss in public but we don't care. You can't help who you fall for."

They placed an advert asking for an open-minded surrogate, and Roxanne Campbell applied.

"Initially I was shocked," says Roxanne, 30. "But they're a brilliant pair and I saw how much they loved each other. I know the baby will be loved too."

"I never in a million years thought at 72 I'd be 'pregnant' and in love with my grandson.

"I make no apologies and I believe God's given me a second chance."

Comment by michelle mitchell on June 8, 2013 at 2:00pm
Shame on you both.do I smell INCEST

Grandma and her grandson are both lost, they are looking for love in all the wrong places. But the funny thing about it is  she said,"that God has given her a second chance." a second chance at what grandma ?God has nothing to do with this. Please do not put God in this situation.You are a pervert and your grandson is just as bad.The two of you should not be among society.

Comment by One Love on January 16, 2012 at 7:27pm
Yukie by then grandma will be dead and daddy a crack head. Poor kid will be lost.either way.

@ wayne Bacchus..the baby won't  be deformed, it's not her egg..granny eggs all dried up! they  bought a donor egg and implanted it in a surrogate..they will be messin with de poor chile head tho when he or she is old enough to understand who "mommy" and "daddy" are...oh gosh, poor thing..so sad...

how sick is this sh!t?!?! and she has the nerve to call up God's name in her incestuous mouth talking about "God's given me another chance" this makes me wanna throw d hell up...but wha de ass is this?! *steupssss*