6 Black Gods of Ancient America You Should Know 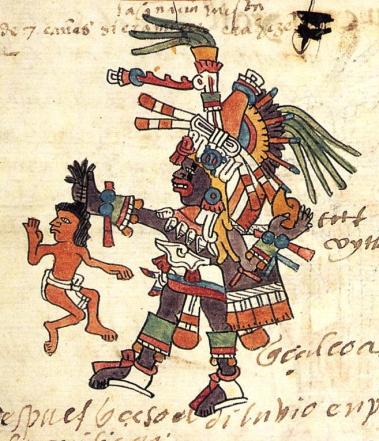 “Several Indian nations, such as the Mayans, Aztecs, and Incas, worshipped black gods along with their other deities, and the Mayan religion particularly exemplifies the high esteem in which the negroes were held.” –Harold G. Lawrence, The crisis, 1962

Why were all indigenous religions and spiritual systems deemed as “pagan” or “evil”and were replaced during colonizations? It would be hard to subjugate a people who were previously worshipped without replacing old traditions with new ones. Lets examine some of the ancient gods found right here in America before colonization. “Many Scholars have noted, the Black gods of the Americas are typically gods of medicine and healing, trade, or music and dance. According to these scholars, these associations are based on the traditions introduced by actual Black people.”

EKCHUAH, was the sixth most commonly depicted deity in the Mayan codices, portrayed at least forty times. He is painted Black with thick lips, His name means “Black Star” (ek means “star” and chuah means “black” in Yucatan Maya). Flod Hayes III reports that among many of the Indians of Guatemala, “the black Christ is referred to in private as Ekchuah,” who Harold Lawrence describes as “black and woolly-haired” and “unmistakably Negro.” In Africa and the Discovery of America, Leo Weiner connects the Mayan god Ekchuah to the African Nama societies of the Malinke and Bambara people of West Africa. Ekchuah may have been based on an older Black god, known to us only as God M.
2. GOD M

Modern rendering of God M, based on Codex Madrid

God M is represented throughout the ancient codices as a Black god, specifically an “old man” with a toothless jaw or one tooth. He appears to be a trader, often shown carrying goods on his head. In volume III of Africa and the Discovery of America Leo Weiner says West Africans like Malinkes and Bambaras made voyages to the Americas long before Columbus. He identifies many of the Mayan and Aztec gods as being derived from the reverence paid to these Black visitors.
3. THE MAYAN PRIESTS

panel of the oldest known Maya mural, discovered in 2001

Frederick Peterson, In his 1959 work Ancient Mexico, remarked: ” We can trace the slow progress of man in Mexico without noting any definite Old World influence during this period (1000-650BC), except possibly a strong Negroid substratum connected with the Magicians. ”

The Magician may have been West Africans who traveled to Mexico or a class of Black people who could ONLY marry among themselves, effectively presereving the African phenotype over untold generations. This reverence for Black people may have something to do with why many Native Americans, inculding the Mayas, respected enslaved Africans and revered Black gods that represented the principles of healing and good fortune. 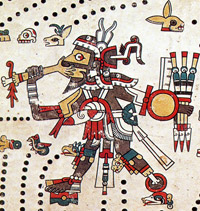 Tezcatlipoca in the Codex Féjérvary-Mayer

Tezcatlipoca was one of the most important gods in ancient Mesoamerica. He began as important diety for the Toltecs and later became the supreme god of the Aztecs. He was seen as a Creator, the god of sustenance, a patron god of warriors, and the bringer of both good and evil. “Black Tezcatlipoca” is the most feared and highly revered. The earliest representations of him represent him as black. His priest would cover themelves in black soot or charcoal to associate themselves with the Black god. They would also paint the newly appointed king black to associate him with Tezcatlipoca.

Hopi depiction of Kokopelli via Alltribes.com

Kokopelli is a well-known fertility god and hunter among the Hopi and Zuni people of the America southwest. As the spirit of fertility, he is seen as responsible for introducing corn (agriculture) to various peoples across the Americas. Kokopelli was first found in Anasazi rock cravings, but he also appears in Missippian artifacts. Throughout South America, he is known as Ekoko. He is believed to descend from the Mayan Ekchuah. Kokopelli is identified with the southwestern Tewa people’s god Nepokwa’i, a great hunter who is described as “a big black man.”

6. BLACK GOD OF THE NAVAHO

Among the Navaho, there is a deity known as Black God. He is not widely-celebrated, but is very important because his knowledge of medicine saved the rest of the Navaho gods from certain death. Black God is the Navajo god of fire. Perhaps because of this, he is also considered the creator of the stars. He is often depicted as black “like space” and wearing a crescent moon on his forehead, with the stars of Pleiades dotted on his temple. But Black God was most likely a medicine man before he came to be known as the god of fire.

Black God: An Introduction To The World’s Religions And Their Black Gods by Dr. Supreme Understanding

If we really understood our history, many would know that our people are the chosen nation of the Most High.