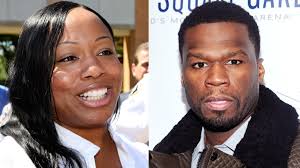 There used to be a time that when your man did you wrong, you would call your BFF and tell them everything.  Now days, do a woman—-or man—wrong and you tell your closest 1 million followers on Twitter, Facebook and IG.

That’s how rapper 50 Cent and his ex are  handling the latest bout in their long running feud.  Shaniqua Tompkins and Fifty turned another private battle into a very uncomfortable public affair in their ongoing war of ‘he-said-she-said”.  The latest  online flare up over the weekend was again about money.  Apparently it started with Fifty posting a comment about how he’s counting the days until he doesn’t have to pay child support anymore.  Tompkins didn’t take his celebration well and took a shot at the rapper’s 11 year old adopted son saying, “Look at his Boy with Red Bottoms…Going to public School in Brooklyn…That’s a real good look!”

Fifty shot back with, “See this why if this b***h got hit by the Q11 bus and it dragged her, I would get out of my Bentley and ride the motherf***er 2 stops. LMAO He is going to a school connected to Hunter college, because he is advanced B***h he is 11 years old in the 8th grade. Just facts.”

With that opening volley, there was no place left for this fight to go but down…and it did.

Fifty laughed at the fact that the house Tompkins lived in was foreclosed recently. Tompkins, the mother of Fifty’s eldest son Marquise who is now 20 years old, took their  beef to a whole new level posting the foreclosure papers online  and giving he whole story to why she lost the home. Her caption  read, “I SOLD MY HOUSE … But you knew that. I had to give the court my closing papers That my house was sold, because you’re contesting Jurisdiction due to the fact you don’t want to pay for college. That nice Asian family I sold my house to, I’m going to notify them of you putting their address up on IG for the world to see.. If you would run your business like you run your mouth Bankrupt king you would have that 18.3 mill you owe sleek headphones and that 7mill you owe Rick Ross Baby Momma. Run a long Now,”

And that was just round one, Tompkins followed up Sunday by posting an old police report from 2008 when she filed domestic violence charges against Fifty. Tompkins captioned the posting with:

We’ve seen Fifty doesn’t just “walk away” when challenged on social media and witnessed fight with others like actress Taraji P. Henson and former ex Vivica A. Fox.  These former lovers  turned bitter enemies forget while they’re battling it out in social media, their children are getting caught in the crossfire. Here’s what Tompkins and Fifty’s son posted:

Fifty and Tompkin’s very public beef is more draining than Hillary and Trump’s bad blood.  Tompkins is putting Fifty on blast it seems because she doesn’t feel like he responds until she plays dirty…but is she hurting her cause in the long run?  A woman beaten and scorned, we get the hurt, but is she also tearing down his reputation and shutting down potential opportunities for him to make more money and maybe pay her what she claims is owed her? It’s a tough call especially if you think the man who owes you has money and is simply refusing to pay you.  But is this more than any of us want to know about these former lovers and their private business?  Why broadcast all your business this way hoping people will take your side of the argument? Do you think running to the court of public opinion on social media is a bold move that could backfire on Tompkins and make her the hated instead of the victim?

LYNX she is not worth it but believe me in his status its easy to put her to bed for ever, but for now all he has to do is ignore her she is about to be broke in a minute the little mufucker will be 21 soon since he is following his mom disrespecting the father they both about to struggle sometimes you have to allow life to teach those who have no respect for life she will be homeless soon

Comment by LYNX on October 28, 2016 at 12:36pm
How hard it is to put this miserable piece of hood rat s*** out of its miserable life she lives in , she is bitter , I might sound like a tramp myself but I'm tired to see this b**** trying to pull the youth down , and she don't have a life just depending on 50 money , the kid needs to move out leave her and go live with his dad

Comment by mr1stroke on October 26, 2016 at 2:36am
Men ain't out there begging and complaining for relationship we make you what we want we stay smashing we can make you a hoe a slut a girl friend a baby mama or a wife but why would we wife you when we can have our ways and we don't ever have to worry women will not get any smarter they will continue to get pregnant for different men or men they don't know the sad part is when a woman is pregnant for a man she don't know or pregnant already without a baby daddy this is what I call a state of emergency and b****** like that only making it worse how many wedding did any one of you went to last year and how many of them will you go to next year or we can start counting the low budge baby showers

Comment by mr1stroke on October 25, 2016 at 6:30pm
Thats why my uncle always say becareful what kind of women you date even as friends thosw women can either determine your success or yiur failure if a woman is insecure low aelf esteem and self respect driven by greed seeking attention she can be a mans worse night mare and biggest disrespect a woman who is confident self secure support ans help lift a man is the woman who will make you king well there many b****** like her out there and we smart enough to know it that is why relationship in the black community is at low rating majority of those birds have no self esteem driven by greed always looking for a man. With opportunity to use but have no idea what it is to be a woman. No one is teaching them these days the grand mothers the. Daughters and grand daughters are all doing the same thing the worse mistakes a man. With opportunity can do is get those b****** pregnant if you dont get them pregnant they cannot use the kids they will be atruggling let them keep dealing and get pregnant for those bums who are about nothing b**** is bored and seeking attention she post her whole privacy online for the wrld to see what true man with respect will take that b**** serious unless its a bum who is using hee for a place to stay or a few dollars or one who is just f****** her women like her are being pass around from bums to bums but i bet you she out there singing that sumb song she a strong black woman she.deserve respect she is a queen all those.who worth nothing repeats the same dumb s*** but dont realize we are not listening one.nut and we gone

Comment by David on October 25, 2016 at 5:04pm
LMAO. He needs to put some distance between himself and her, because she is scorned, and is willing to do anything to pull him down, even if she looks crazy doing so!

she just money hungry and mad that he has moved on and left her behind..