50 Cent don't want focus on BEEF with T.I. "Don't Get Emotional Over Your Lady. It Will Get You In Some Sh*t You Don't Want To Be In" 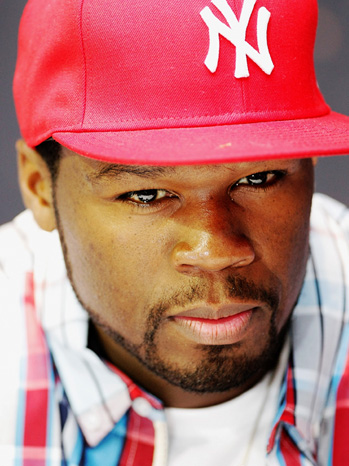 50 Cent is dead serious about wanting to feed one billion people in need. He doesn't want fans getting distracted from helping him reach that goal by getting caught up in whether or not he has issues with T.I.

Fif touched on the subject today via Twitter. He said he spoke with Tip last night. While he didn't reveal what was discussed, he did remind fans that Street King and helping those less fortunate is much more important than any beef.

"Look how much you fools have been tweeting about me and @tip I spoke to him last night you sh*t heads should be tweeting about street king," 50 wrote. "You know I try to do the right thing. I'm starting to feel like good guys finish last. You talk more about sh*t that can go bad then positive things." T.I. may have just made the mistake of waking a sleeping giant.

As we reported earlier, T.I. responded to a joke 50 Cent made in 2010 about his wife Tiny taking the charge for him in his most recent drug bust that wound up costing him 11 months in federal prison.

In the December/January issue of Vibe, Tip spoke angrily about Fif's comments.

“I’ma tell you, 50 Cent and anybody else, we not gonn’a have no discussion about what my ole lady should’a, would’a, couda done for anything as it pertains to me,” Tip said. “We ain’t gonn’a do that. I’m the only one in my family that’s gonna take a lick when it pertains to the legal system. Since me, none of my other family members have seen a jail cell. Nobody. I’m the last one. The buck stops here. I feel that a person that stands behind [his woman for a criminal charge] is a coward anyway.”

It didn't take long for 50 to fire back via Twitter.

"Man I just saw something T.I said in VIBE about a tweet I wrote when he caught his drug case. He just got out a jam and caught a new one," 50 wrote on the social networking site. "Any other time a n*gga done. Get caught with 10 machine gun an silencer then catch a drug charge. You will f**k around and get natural life. This boy got a get outta jail FREE card. Don't get emotional over your lady. It a get you in some sh*t you don't want to be in." 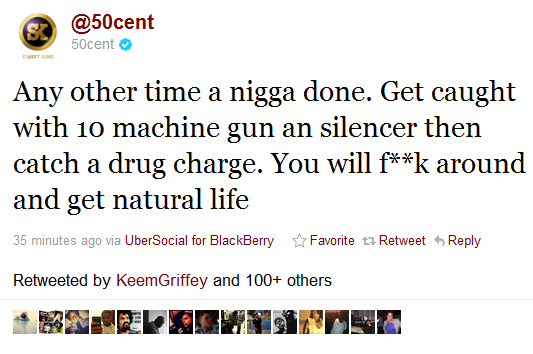 @ STARR WHITEHURST, I AGREE AND WHAT YOU SAID IS SOMETHING LIKE WHAT I'M SAYING. WHEN I SAID "THIS IS STILL A WHITE MANS WORLD" IT MEANT THAT THE WHITE MAN STILL THINK AND FEEL LIKE HE IS ON TOP OF EVERYTHING AND NOTHING OR NOBODY CAN BRING HIM DOWN OR HE BETTER THEN THE REST. JUST THINK, THE WHITE MAN TREATED OUR PEOPLE LIKE S*** BACK IN THE DAY TO THEY FACE BY CALLING THEM OUT THEY NAME, GIVING THEM THE LEFT OVER FOOD THAT THEY DON'T WANT, HAVING THEM USE THE NASTIEST BATHROOMS. BUT DO YOU THINK THEY COULD OR WOULD DO THE SAME NOW??? WHEN THAT SIGN SAID "WHITE ONLY" THAT MEANT NO MATTER WHERE YOU WAS FROM AS LONG AS YOU WAS WHITE THEY WAS TALKING ABOUT YOU. WE WANT TO FIGHT OR KILL OUR OWN PEOPLE IF THEY ARE FROM THE OTHER END OF THE BLOCK!!! WE DON'T HAVE TO TEACH OUR KIDS NOTHING ABOUT A STRUGGLE, THEY LEARN THAT ON THEY OWN. I'M PRETTY SURE IF A PERSON CAN GIVE THEY CHILD THE WORLD THEN THEY WOULD. I DON'T KNOW WHAT ANYBODY ELSE TEACH THEY CHILD BUT I TRY TO TEACH MY CHILD THE FACTS OF THIS WORLD WE LIVE IN. YOU ARE RIGHT, GOD DID PUT THIS WORLD IN THE HANDS OF MAN BUT WHAT YOU FORGOT IS THAT THERE IS ALSO SATAN OUT THERE WHO LIKES TO GET INTO PEOPLE HEADS AND HAVE THEM THINKING THAT GOD MADE THEM BETTER THEN THE NEXT. KEEP IT REAL, DO YOU THINK EVERYBODY IN THIS WORLD ARE TREATED EQUAL??? THE DIFFERENCE IS THAT IT'S NOT ONLY BLACKS THAT ARE STRUGGLING, ALL MAN KIND ARE STRUGGLING THESE DAYS. NOW CHECK THIS OUT, HOW MANY PEOPLE YOU KNOW THAT HAVE MONEY AND TRYING TO GIVE BACK??? NOW, HOW MANY PEOPLE YOU KNOW THAT HAVE MONEY AND NOT GIVING NOTHING BACK??? JUST AS I THOUGHT. NOW WHEN TWO RAPPERS START TO BEEF, HOW MANY PEOPLE YOU ARE TALKING ABOUT THAT OR READING UP ON THAT OR FOLLOWING THAT BEEF??? EVERYTHING AND EVERYBODY IN THIS WORLD LOOK FOR FOLLOWERS AND ONCE THEY SEE PEOPLE ARE FOLLOWING NEGATIVITY THEN THEY ARE GOING TO KEEP NEGATIVITY GOING, BUT IF THEY SEE PEOPLE ARE FOLLOWING POSITIVE THINGS THEN THEY ARE GOING TO KEEP POSITIVE THINGS GOING AND THAT DON'T JUST GO FOR BLACK PEOPLE THAT GO FOR WHITE PEOPLE AS WELL.

Comment by Starr Whitehurst on December 1, 2011 at 10:45pm
@ Big F* I agree with some of what you are saying but in the regards of this being a white man's world that is where I am in disagreement. God put this world in the hands of man. Not black or white. The difference between black and white is a large percentage of whites learn and grow with a sense of entitlements while we teach our kids that for blacks is a struggle. Ones environment should not dictate how we turn out. But you are right feeding into negativity is our biggest downfall as well as feeling like anyone is holding us back but ourselves. 50 started the drama with Tip and then complained that people tweeted about it. Sometimes in the wake of our greatness we do something very uncouth that completely over shadows the good we are trying to accomplish. The conversation between him and Tip was probably an apology. We as a people need to accept that this is our world as well and we are entitled to everything that is in it. We need to stop asking others if it is ok for us to succeed and give ourselves the permission and God given right to do so. 50 do your thing bro focus on the task at hand you will inspire many to join your cause

@TRACY CAMERON, I'M GLAD YOU AGREE. BUT IT'S A SHAME HOW QUICK A BEEF CAN START AND GET AROUND THE WORLD BUT FEEDING A BILLION PEOPLE IN NEED DON'T GO NOWHERE!!! BLACK PEOPLE JUST DON'T UNDERSTAND THAT WE CAN HAVE THE SAME POWER THAT THE WHITE MAN HAD 400 PLUS YEARS AGO IF WE JUST STICK TOGETHER AND HELP EACH OTHER INSTEAD OF FIGHTING AND KILLING EACH OTHER. WHAT BLACK PEOPLE DON'T UNDERSTAND IS THAT "WE ARE FREE" BUT THIS IS STILL A WHITE MANS WORLD AND WE PROBABLY COULD CHANGE THAT IF WE ALL START COMING TOGETHER AND LOOKING OUT FOR EACH OTHER!!!

all this is advertisment. this sells papers and magazines. They will get you into s*** you dont need to be in. If you go on doing you, and avoid feeding back to nonsense. See how real men and women will respect you.

Thanx 50 for growing up in front of our eyes.  Growth is part of our life process.  This man went from DRUG DEALER to RAPPERS to BUSINESS MAN to PHILANTROPIST{concern for human welfare and advancement}  Now that is a BOY TO MAN transition.  KEEP UP THE GOOD WORK 50 and all other BLACK MEN out there handling their bizness!!!   Peace!!!!!   :)

Comment by Orlando Jack on November 29, 2011 at 4:48pm
This fool fifty is not even relevant any more. His raps are wack and everybody is game with his marketing tool.
Start beef to sell records. Grow up fool, nobody cares about your wack non rapping ass.