Whether you believe the anti gunners are uninformed, misinformed, or simply dishonest brokers of the facts, there are still a few gun control myths that are mind boggling to the point you’d wonder how they can even exist at all. In this top 5 list, The Shooter’s Log will cover the ones we considered the wackiest, however, you are free to disagree or pile on a few favorites of your own.

The term “assault rifle” was hardly ever used, even in the military, until the 1980s.

Most likely, the hair on the back of your necks stands up every time a politician or newscaster improperly uses the term assault rifle to describe a modern sporting rifle. The difference between an assault rifle and semi-automatic AR-15 is as obvious as the difference between the version of a car you go to down to the local dealer to purchase and it namesake making laps in NASCAR race. The body style is similar, but under the hood is what counts, not the cosmetics or name.

The misuse of the term assault rifle, in part lead to the Assault Weapons Ban (AWB), formally called the Public Safety and Recreational Firearms Use Protection Act, a subsection of the Violent Crime Control and Law Enforcement Act of 1994, which effectively blocked the sale of of several different semi-automatic firearms in an effort to reduce the crime rate. While it is true that violent crime and the murder rate did fall during the 10 years the AWB, the violent crime was falling before the AWB.  The violent crime rate has also consistently went down across the nation since the expiration of the AWB. Remember, simply because there is a correlation during a specific time period, does not mean there is a causal link. For example, more ice cream is sold during the months of June, July, and August than other months. June, July, and August also have the highest murder rates. That is a correlation but does not mean reducing ice creams sales would reduce the murder rate.

In the 14 years since the previous ban lapsed, even gun control advocates acknowledge a larger truth: The law that barred the sale of assault weapons from 1994 to 2004 made little difference. The number of people murdered in the U.S. with any type of rifle has been less than 300 per year, nevermind the so-called “assault rifle.” Which one would you say was easier to get, the firearm or driver’s license?

The continuing focus on these so-called assault weapons stems from the politicians and the media’s obsessive attempts to vilify the AR-15. This, in turn, obscures some grim truths about who is really dying from gunshots and the fact that your are about 20 times more likely to be shot with a handgun, even odds with a shotgun, several times more likely to be killed with a blunt object, knife, or hands, feet, fists or being pushed.

2. Myth: It’s Easier to Get a Gun Than a Driver’s License

The myth is silly on its face and all around, a poor comparison. I would say it’s like apples and oranges, but at least those are both fruits. Getting a gun versus a driver’s license is more a akin to comparing an apple and foot massage. However, the anti gunners picked it, so let’s do the comparison.

Do we really need to go on? Apples and foot massages—not even close.

3. Myth: Guns Only Have One Purpose: To Kill “The sport of shooting helps me live in the moment. There comes a peace during practice, all the blunders made, failures past, accidents, injuries and nerve pain all are momentarily gone.” ~Eric Hollen.

Hunting and target shooting aside, a great analogy is to compare carrying a firearm to driving a car. A gun can be carried for self-defense, but never employed. Passively carrying a firearm puts everyone around you at exactly zero risk. However, every time someone gets behind the wheel, they are actively engaging an instrument that kills many, many more people than guns each year, and the act of using the car is intentional not passive. However, we call crashes accidents for a reason—even when the driver was negligent. We blame the person for texting or the driver for being drunk, not the car or even the alcohol manufacturer. By comparison, even though you may carry a loaded firearm, statistics show that legally carrying firearms for self-defense (we are not talking about those intent on doing harm) is far less likely to result in the loss of life than driving a motor vehicle. National Highway Traffic Safety Administration (NHTSA) 2016 data shows 37,461 people in the U.S. were killed in 34,436 motor vehicle crashes, an average of 102 per day. That far outpaces the number of people murdered by firearms each years.

Since 2009, over 90% of mass shootings have, sadly, occured in gun free zones. I understand, even if I do not necessarily approve of, why certain areas are restricted from firearms. The courthouse is an example, but with a major difference. The courtroom has a significant armed presence in, and around, it. While many would still favor to exercise their right to take responsibility for their own safety, perhaps there is room to pass that responsibility on law enforcement. Other areas, simply because there is a security guard on the premises, does not meet the same standards. A few security guards at a mall, it is not sufficient to protect the patrons.

This is really common sense. Use any analogy you’d like. If you want to catch a fish, you go where there are a lot of fish without a lot of competition. Gun-free zones are typically well populated and the law abiding are, by definition, typically unarmed in a gun-free zone. On and off duty law enforcement would be an exception of course. And thankfully, there are plenty of stories where an off duty or plain clothes LEO was able to draw their weapon and thwart a potential tragedy, but when it comes to gun-free zones, this is a minority rather than a majority of circumstances. However, eliminate the gun-free zones and the chances of an armed citizen being able to intervene becomes much higher. 5. Concealed Carry Does Not Thwart Violent Crime or Make Us Safer

There are hundreds of times a month, week, day, that concealed carry prevents a violent crime. The stories are in the news every day across the entire country. Sure, the ones where the concealed carrier was forced to shoot may make the headlines, but what about the times where the presence of the firearm was enough to turn the tide without someone getting shot? I remember, as a teenager, when my sister was home alone and a subcontractor of my father’s construction business came pounding on the door, drunk and threatening to burn the house down. Fortunately, while my sister was not a physical match for the burly construction worker, she had the presence of mind to run to a closet and grab a rifle. The man was drunk, but not suicidal and quickly retreated to his car at the sight of her peering through the window with a .22 LR rifle. He returned the next day with flowers and a big apology. How often do situations such as this happen, but are not reported?

I am sure  many of you who are savvy and keep up with the gun control debate realize the mistake I made at the beginning of the last paragraph. I put hundreds of times a day. Even the CDC’s own report, a handful of years ago, estimated the number of times a firearm in the U.S. is used defensively to be between 500,000 and 3 million times a year due to underreporting! That means thousands of times a day, not hundreds…

And by the way these are my guns/rifles below, and because of they  look menacing and by my owning them: They and I are both deemed criminals, prone to violence. 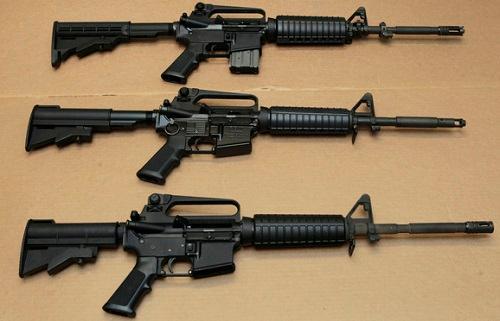