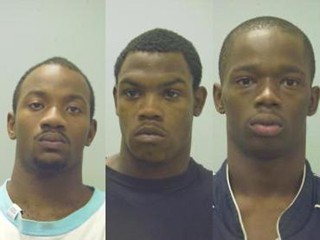 Amid beefed up security, students at Fenger High School went back to class Monday, but without one of their peers. Derrion Albert wasn't there after he was violently murdered in a melee Thursday that was caught on tape.

Silvonus Shannon, 19; Eric Carson, 16; Eugene Riley, 18; and Eugene Bailey, 18, allegedly kicked and punched Derrion, an innocent bystander in a fight between two groups of students near the South Side school Thursday afternoon, according to Cook County prosecutors. Shannon, Carson and Riley were ordered held without bail on Monday. A bond hearing for Bailey was scheduled for Tuesday afternoon.

Police said an amateur cell phone video made by a witness to the beating shows the brutal attack and murder. When the punching, kicking and stomping stopped, Albert was carried inside the community center and rushed to the hospital where he later died.

The assault was not gang-related but arose from a disagreement between students who live in Altgeld Gardens and another group who live in an area known as the "Ville," according to Assistant Cook County State's Attorney Jodi Peterson.

"It was a brutal and violent attack in which the victim was merely a bystander," Peterson said.

Earlier Thursday morning, the fight between the two factions led to a shooting outside the school, Peterson said.That led to a brawl near the school after classes finished shortly before 3 p.m.

When Albert gained consciousness, he moved a few feet away from the mob and tried getting up. But he was attacked again. Soon, a group of five from the Altgeld Gardens faction descended upon Albert. He was struck again with a wooden board wielded by Riley as Shannon stomped on his head repeatedly, Peterson said. It was not immediately clear Monday evening what role Bailey allegedly played in the attack.

Albert's family said they were grateful for the video that showed the beating, even if the tape is painful, if not impossible, for them to watch.

Meanwhile on Sunday, more than a dozen of Albert's relatives used their faith to prop them up during this painful time as they attended church on the city's South Side.

They thanked the Fenger student who took the cell phone video of the beating, but most say they can't watch the video because it's just too difficult.

While the family members want the people who beat Albert to pay, they don't want them to pay with any more violence.

"We don't want anybody to go out and try to kill the person that did this to Derrion," said his aunt, Sheronda Williams. "We don't want that over our hearts and souls."

Chicago Police Commander Eddie Welch said the beating did not appear to be gang-related. "Right now, this appears that you had a young man that's making his attempts to go home," Welch said.

Peterson said that Shannon, a Fenger student, and Riley both gave videotaped confessions to their roles in the beating.

Shannon has a job as a landscaper. Riley, a high school graduate, works part-time at a health care facility and auto repair shop. The pair do not have criminal backgrounds.

Carson, a Fenger junior, is currently serving a two-year probation for a July 2008 robbery.

As they left his bond hearing, Carson's family described the murder as "heartbreaking."

Meantime, a makeshift memorial to Albert has been erected outside Agape Community Center at 343 W. 111th St., where he was beaten to death. And some of his classmates said they think Albert won't be the last to get hurt by violence in the community.

Some of the students think the fighting isn't done yet and they're just trying to stay out of the crossfire.

"They be fighting. They're at war up here, all the gangbangers and stuff, so I just try to come to school and do what I gotta do and go home," said Fenger student Maurice Holley.

One local pastor's reaction to the violence is "outrage."

"They should be outraged that a young man with great potential has lost his life to foolishness," said Rev. Renaldo Kyles.

Even with Monday's increased police presence, many kids said it's the trip to school that scares them.

"You have to worry about what you think is gonna happen, if something's gonna happen to you while you're on your way home," said Fenger student Antonette Akins. "That's why I didn't walk to school today. I had my mom drop me off 'cause I don't know what's gonna happen while I'm on my way to school."

For one mom, it was a tough decision to bring her daughter back to school.

"I don't see any improvement, not at all," said mother Trillia Richards. "School hasn't even been in 30 days, and already somebody is being killed."

Albert's cousin came back from Iowa to attend his funeral.

"I moved away from Chicago just because this here. So, I wish he could have came with me," Avery Wingard said.

Just feet from where Albert was fatally beaten, loved ones formed a prayer circle on Monday. Afterward, the family was escorted to a prayer service by Bishop Tavis Grant. Albert's parents and family members were too distraught to talk, but their tear-streaked faces spoke volumes. Then their bishop gave voice to their feelings.

"If you know that your child participated in this behavior, turn your child in," Grant said.

Earlier at Fenger, a group of riled-up residents attempted to storm the building, shouting and pounding on the school doors. More police were called in and the demonstrators were sent away, but emotions boiled over at times.

There are some in the neighborhood that feel the cycle of violence can be broken. Several pastors from different churches gathered outside the school at 11220 S. Wallace St. before the day began to pray for an end to the violence.

"Once we pray, we have to work those prayers, and we have to get busy in the neighborhood to do all that we can to make sure that our community is safe and our young people, who are our most valued commodity, are safe and protected," said Pastor Alvin Love.

Police promised to have an increased presence around Fenger for the immediate future. Many speakers on Monday attempted to appeal to the collective conscience of the area's young people. They urged witnesses to cooperate by speaking with their pastors or police so that all who took part in this killing can be brought to justice.

In the surrounding neighborhood, posters demanding peace were everywhere, put in place by activists from the anti-violence group called the BlackStar Project.

"It's been a learned behavior. Our children suffer from something called moral inversion," said BlackStar Project spokesman Q.L Anthony. "I'm calling the parents out on this one. If you don't get out and govern your child's behavior, then who will?"

"The video games they watch all day long, the surreal TV, you can't do those things that you do on these video games," Anthony added.

On Monday, one of Albert's high school friends brought a teddy bear to the murder scene memorial. She said Albert is the second friend of hers to die on the streets.

One activist promised that if they sense no progress on dealing with youth violence, he'll organize a demonstration to embarrass the Mayor and the school system.

Mark Carter pledged to take a large group of children right up to the barricades outside President Obama's Kenwood home. It'll be in full view, he says, of the international press.