30 People Arrested For Food Stamp Fraud; Guess How Many Were Black? 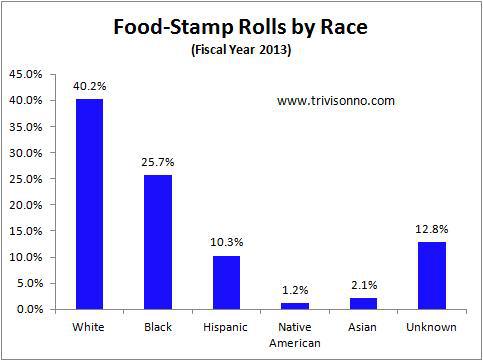 While the media and America’s culture will have you believe that black people (or anyone who isn’t white) account for copious amounts of fraud, there’s a story breaking that you won’t hear on Fox “News” anytime soon (or you might, because any chance to crush the SNAP program, they will take).

According to WCAX News in New York:

More than 30 people have been nabbed for food stamp fraud in the North Country.

Investigators say over the past couple month’s people used their food stamps to get food or alcohol at the Old Time Butcher Block store in Brushton.

Police also say it’s not the first time the owner of that store, Dennis Sauve, has been charged with allowing such fraud.

Now here’s the kicker: they’re all white. Brushton, New York, where this bust happened, has a population of roughly 480 people. Approximately 99.83% of the population is white, and 0.42% are black. These demographics are eerily similar to the food stamp capital of the country, Owsley Country, Kentucky, which is 99.22% white and 95% Republican. Maybe we should investigate them.

I just wish we could get the political affiliations of those arrested in Brushton.

According to WPTZ News:

The store owner, Denis Sauve (also white), has been charged with third-degree grand larceny and misuse of food stamps.

This really isn’t a racial issue so much as it is an, “I told you so,” issue. While the food stamp program has one of the lowest rates of abuse than any other welfare program, a lot of people buy into this misconception that it is the “lazy blacks” who account for all the fraud and woes of government assistance. Well, here we are, a major food stamp “bust” and every criminal involved is white.

Comment by Big Woman on March 3, 2016 at 3:42pm
@Penelope John you're right. Also all public assistance, food stamps, Medicaid recipients are required to come in for recertification yearly but the Hasidic Jewish females who are on these programs because of their religious beliefs cannot have contact with males (the workers) so their Rabbis are allowed by the city government's agency HRA to bring in their documents.
No other group is allowed to do this but because they VOTE consistently their political power is respected getting their communities needs fulfilled.
The majority of welfare recipients in America are white.

This is not a new issue and no matter how much it has or is being abused "Blacks" will always be blamed and be stereotyped which is unfortunate.  No one addresses the Jewish population who resides in Israel and receive everything like dey living in the USA.....