Carnival 2016 Is Only One Month Away Compliments The Caribbean Blogger There are reports that there have been 5 deaths due to H1N1 in Trinidad and Tobago. My brother, who lives in Mayaro, called… 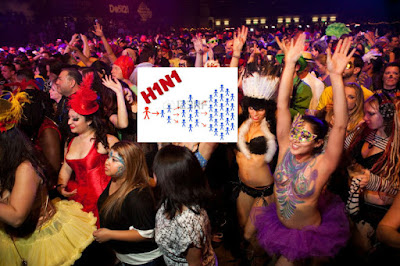 Carnival 2016 Is Only One Month Away

There are reports that there have been 5 deaths due to H1N1 in Trinidad and Tobago.
My brother, who lives in Mayaro, called me a couple days ago and told me that it has been reported that his neighbor died last Friday.
How did he get it? I asked. What was going through my mind is how a lone man in Mayaro would contact such a deadly virus.  He had to pick it up somewhere.
My brother responded in a voice thick with sarcasm; “Boi if I knew that answer I would not be talking to you. I would be talking to the Health Minister.”
I looked for that. “Well the virus had to get into Mayaro some way.  I responded sheepishly.
Of course I had to Google it.  This is what I found about how it spreads.
This is according to the United States Center for Disease, CDC
How does the 2009 H1N1 virus spread?
Spread of the 2009 H1N1 virus is thought to occur in the same way that seasonal flu spreads. Flu viruses are spread mainly from person to person through coughing, sneezing or talking by people with influenza. Sometimes people may become infected by touching something – such as a surface or object – with flu viruses on it and then touching their mouth or nose.
Read more
After reading that page my question changed entirely.
Why is there nobody talking about Carnival 2016 and the H1N1virus?
The conversation about this deadly disease and upcoming Carnival is being avoided.
Is it that we are so concerned about the biggest show in the world that we are ignoring it like the “Hurricane” party at Smokey and Bunty?
No question, millions of dollars have already been invested in the upcoming Carnival 2016.  Trinbagonian are not ready to accept that there are serious consequences for ignoring this virus.
But you know what?
Here's what I predictL.
H1N1 will NOT stop the party.
Any predictions?
Keep in touch and get updates when you like
The Trinidad and Tobago Association of Village and Community Councils