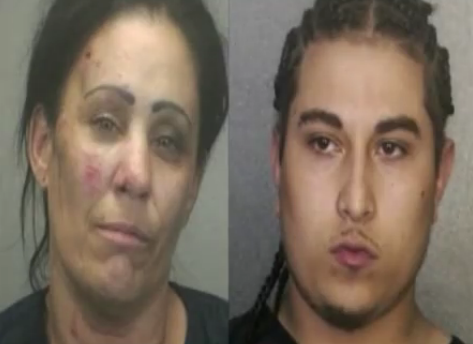 A 31-Year old deaf and mute man out trying to have a good time with friends, was attacked by a gang member who mistook their sign language for gang signs.

Alfred Stewart was celebrating his birthday along with close friends, whom are all deaf, at Ocean's Eleven Sports Lounge and Grill in Hallandale Beach, Florida.

Police say that's when 45-yea old Barbara Lee became heated when she thought they were throwing up gang signs, so she starts throwing them back.

I can't think of anything dumber than throwing gang signs at a group of deaf people who obviously were there minding their own business, but anyway.

Lee then went outside, but soon came back with 19-year-old Marco Ibanez.

According to police Ibanez pulled out a knife and both he and Lee attacked the group, leaving Stewart with 2 stab wounds to the torso and one to the back. One of Stawarts's friends also suffered stab wounds, and a bouncer who tried to help them was hit in the head with a bottle.

"By them being deaf, they're not bad people," Stewarts mom, Barbara said. "So they don't think nothing bad, they just. He'll say 'ok, it's alright I don't won't no problems.  I'm just thankful that it didn't get worse." Alfred Stewart
Lee and Ibanez were both arrested and charged with assault with a deadly weapon.

Comment by Rabalac on May 5, 2011 at 7:16am
Personally I believe that gang members should be treated as if they had 'mad cow' disease;taken out of their misery.

Comment by carolyn johnson on May 5, 2011 at 7:16am
u stupid dumb brain dead a******* -you could have killed these people who was mindin their own dam business for some stupid ass gang member bullshit- hand signs were out long  before this gang trash -you uneducated dummys

Comment by Cliff Hicks on May 4, 2011 at 4:19pm
She apparently isn't even intelligent as far as gangs is concerned. A true gang member would know gang signs from sign language. Real life jack asses.

Comment by Vladimir Dorsinvil on May 3, 2011 at 1:55pm
Why ? do deaf people know gang signs in the first place!

Comment by JamRockLady on May 2, 2011 at 11:39pm
Let this be a lesson to all them wanna-be-gangsters, and already-gangster, out there, about just how utterly ridiculous, point-less, and purpose-less gang hand signs are!  SMH!