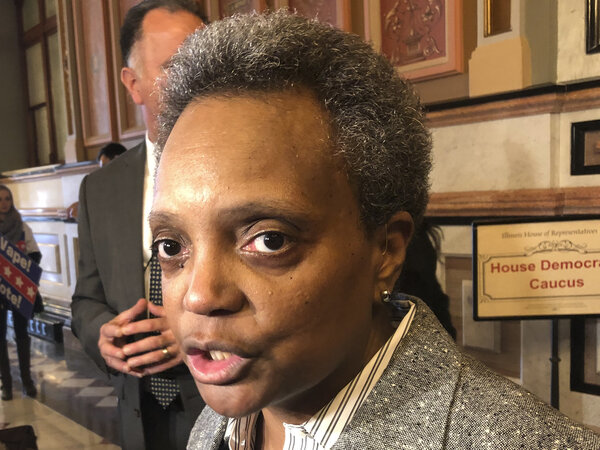 Chicago Mayor Lori Lightfoot is urging potential witnesses of the shooting to come forward and assist police with the investigation. "We can't normalize this kind of behavior," she said.

At least two people began shooting at a house party in Chicago in the early hours of Sunday morning, according to police, who say that 13 people were shot and being treated at area hospitals.

No one was killed in the shooting, but several victims were in critical condition, according to police.

Authorities are still trying to determine a motive for the attack, which took place just after midnight at a home in Chicago's Englewood neighborhood. The shooting victims range in age from 16 to 48-years-old, police said.

Police said the shooting took place at a party honoring a man who was himself a victim of gun violence and was shot and killed in late April.

"It's a terrible tragedy and frankly and incredible act of cowardice," Chicago Mayor Lori Lightfoot told reporters at a press conference after visiting with victims at a local hospital.

"We can't normalize this kind of behavior," Lightfoot said, before urging those with information about the shooting to come forward and help police with the investigation.

"People in that house know what happened," Lightfoot said. "We urged them to overcome their fears and come forward with information so that police can do their job and track down those who are responsible."


Police described a "chaotic" scene that unfolded around 12:30 a.m. local time. The Chicago Tribune reports the party was in honor of the birthday of Lonell Irvin, a 22-year-old man who was killed in April during an attempted carjacking.

Fred Waller, Chicago Police Department's Chief of Patrol, said at an early morning press conference the shooting took place at three "scenes" beginning inside a home in the 5700 block of South May Street, before flowing out to the into the neighborhood.

Officials promised a beefed up police in the area in the coming days.

Waller said he viewed video footage captured by a city police camera. It showed someone police believe to have exited the residence who began firing at people as they were trying to flee.

Waller said another person who left the home began firing on a vehicle driving down the street.

"We can't tell from inside who was firing. But from outside definitely it was two different shooters," Waller said. "It looks like they were just shooting randomly at people as they exited the party."

According to ABC 7 Chicago, it was a violent weekend in Chicago, with at least 34 shot, four fatally, in the city since Friday evening.

Despite the rash of weekend violence, police data show shootings and homicides in Chicago have dropped by double digits for two years in a row. The Chicago Tribune reports, those figures are on track to do so again this year.

A tally compiled by the paper shows 2,594 people have been shot in the city from the start of the year through Dec. 14.

The only thing to do with antholes is to nuturalize them. These vermin need to be sentenced to a life in a mosquito cage.

Comment by mr1stroke on December 23, 2019 at 9:15am
Its not even about debating just look at the topic, instead of showing concern you rather come for my head just because you dont agree with what i say or how i say it, but how about a solution, or express any inputs that can help with the process, than again thats why that community will never do better and why as a people we are now in the back of the line, white people get together and take care of their issues, all that impeachment nonsense is all about power and control, just remember the Muelers investigation, and for those who don read or dont observe politics, the democrats were so upset that Hillary did not win 19 hours later through inauguration they said they would impeach Trump, so to all who are against him and for impeachment ask your self who do democrats care about, and how are they showing how much they care to the black community? I guess many just dont care as long they are comfortable fighting each other

Comment by King Zion on December 23, 2019 at 8:23am
@mr1stroke, enjoying the debate, but we must carry on from this topic, see you in the next debatable topic

Comment by mr1stroke on December 23, 2019 at 5:24am
So you contradict your own belief on one end youre concern about him being racist, but thats what the racist democrats tell you because they seek power, punching a clock for the white men is not something you should brag about if you have that much education, i rather self employed or partner with a business or contract, a n***** can be anybody well before you respond understand the subject, because my comment was pretty clear i even balance the difference between white trash and white people so every one knows the destruction within their community, i will not call niggers my people, when niggers were the one to start selling their own brothers due to greed and hate, and now its even worse, if you live in the hood and doing better not only they want what you got but they want your head on a platter, how long will we live in denial and make excuses for those who continue to make us look like monsters, if you consider your self the same as a n***** dont be mad when a white person says you are all the same, i tell every one i am far from a negro i am a black man, it is their responsibility to learn the difference between the two

Comment by King Zion on December 23, 2019 at 5:11am
And the distraction of a president you speak of is my least concern. Remember the only distraction is individuals like you thinking that raising our kids to be Niggas will mode them into kings and queens.

Comment by King Zion on December 23, 2019 at 5:06am
Excuse my writing since its early and I am off to pinch my own clock to make sure my young ones eat and become educated in the world I choose to have them in.

Comment by King Zion on December 23, 2019 at 4:50am
And may I added, the word N**** does not defined our people, remember anyone can be a N**** since it means an Ignorant person. So I Niggos can be use if you mean some blacks needs to free themselves from mental slavery

Comment by King Zion on December 23, 2019 at 4:43am
@ me1stoke, you wave the black power sign and the true N is you, but if you really want to know what kind of job I do, I own my business and I dont have to do punch anyone's clock. And yes in the city of Pittsburgh I have made really changed but the difference is only N got to speak of their achievements when they are really not successful. So will keep.voting and supporting Democrat while you keep pushing the black power sign going nothing for your people. I am sure you cant speak of your achievements and I an sure your education level was from the street, r maybe I for it wrong. Maybe your so educated your blind to see the truth. I have a challenge for you, run for office and I support you and let's see what difference you my brother. Enjoy the holidays and we pick up where leave off. And yes keep the fight up, but remember, only the house N call his brothers N and thinks it's ok, because if you want to be honest, your doing the white man bid. And remember whites only call whites trash when they married or hang with BLACK, so your Information all my bothers and sisters are kings and queens and yes may be a little misguided and one day we took will see, our kings and queens will rise to the top.

Comment by mr1stroke on December 23, 2019 at 2:47am
Its so easy to recognize the typical n***** they paid the white man for a little bit of education and they feel special, niggers always feel better if anything bring them close to whit people, you are so educated what you achieve, what change have you made, in fact its holiday seasons what community are you volunteering in? Please share with us, if you are so educated and still punching the clock for a white man you are a true n***** advertising and make white people look good, i will call you by your name if thats what you are you damn n*****

Comment by mr1stroke on December 23, 2019 at 2:43am
King Zion you can address me by name that's what a man do, it aint my fault if you are not educated enough to know the difference between a black person and a n*****, just like a white person knows the difference between a white person and white trash, people like you embrace racism youre talking about the president is racist, about every other concern but black issues and thats what niggers do they make excuses for white people, before that president what have those white democrats done for black people? So far you have been marching for prison and police reform you sure have that, they run reparation in your face so you can vote but give you nothing, they treat black people as second class citizens but illegal immigrants have the right to obtain driver license, its niggers like you who still suffering from mental slavery you make any excuses for white people, get it to your head Trump is just a distraction, how long have you been voting democrat look at your community, its so sad how you niggers accept that slave treatment but still complaining, its a disease