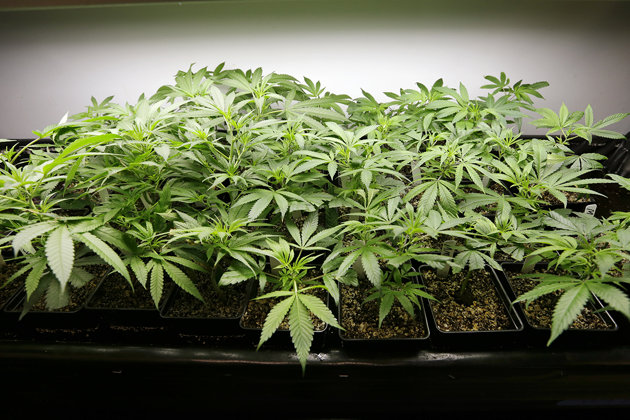 You can get high for your health in many states, but beware of the law.

With medical marijuana now legal in 20 states and Washington, D.C., outsiders might assume that the industry’s business owners and investors are living the high life — particularly considering that a pound of “pharmaceutical-grade” marijuana costs about $1,000 to produce and sells for $7,500 at retail prices, estimates Adam Bierman, CEO of Medmen, a dispensary consulting firm. Indeed, though medical marijuana sales are expected to increase only modestly this year, Medical Marijuana Business Daily, a Providence, R.I.-based trade journal, projects that they could as much as double next year, to $3 billion. And owners and shareholders of some companies — including medical vending machine maker Medbox (MDBX) (whose stock is up more than 800% in the past year) and Medical Marijuana Inc. (MJNA) (up 200%) — have certainly benefited from legalization.

It’s a risky business though: Under federal law, selling, producing, possessing and consuming marijuana is still a crime. That not only makes marijuana businesses targets for federal raids and seizures, it also complicates their basic business processes. Opening bank accounts, processing credit card transactions and deducting normal business expenses on tax returns can be difficult if not impossible — and, at the very least, can make operating costs higher for marijuana businesses than they are for “normal” firms.

2. “Good luck getting a prescription.”

People seeking medical marijuana in Los Angeles sometimes just go for a stroll along the Venice Beach boardwalk, where doctor’s offices specializing in marijuana are almost as common a sight as T-shirt vendors and tattoo parlors.

Why not seek help from their regular doctor? Only one or two out of every 500 doctors say they will prescribe medical marijuana, according to John Nicolazzo, COO of MarijuanaDoctors.com, a database of doctors who agree to help patients obtain marijuana. “Prescribe,” in fact, isn’t even technically correct. Instead, doctors are legally allowed to “recommend” marijuana for a patient, and they often charge a fee of $150 to $300 per recommendation, says Charles O’Brien, a psychiatrist and director of the University of Pennsylvania’s Center for Studies of Addiction.

The reason so many primary-care physicians refuse to recommend the treatment goes back to marijuana’s illegal federal status.And even though a 2002 decision by the U.S. Court of Appeals for the Ninth Circuit prevents the federal government from investigating or revoking the license of a physician because they recommended marijuana, some doctors still aren’t comfortable with it. As a result, cottage industries of physicians specializing in marijuana have sprouted up in legalized states: Of the 300 physicians listed on MarijuanaDoctors.com, about two-thirds focus exclusively on prescribing pot, often opening clinics for that purpose.

The American Medical Association, for its part, says there is a need for more research on the use of marijuana in patients with serious health conditions, and that the drug’s federal classification as a controlled substance should be reviewed. “Discussion of these alternatives between physicians and patients should not subject either party to criminal sanctions,” the AMA says.

While medical marijuana is generally intended to relieve symptoms of patients with AIDS, cancer, multiple sclerosis, glaucoma or other serious diseases, doctors frequently end up recommending it for other chronic conditions that have no official diagnosis, such as pain — fueling concerns that it can too easily end up in the hands of those who just want to smoke pot for fun.

“That’s the easiest thing — to just go and tell your doctor you have pain, because you can’t test for pain,” says Alan Budney, a psychiatry professor at Dartmouth’s medical school who studies drug addiction. In Colorado, where nearly 107,000 patients are currently approved to use medical marijuana, according to the state registry, 94% report they are being treated for severe pain, while only 3% take it for cancer and 1% for glaucoma.

Certainly, doctors acknowledge that marijuana can be appropriate for treating pain as well as preventing seizures in epileptic patients, reducing eye tension in those with glaucoma, and suppressing nausea, especially in people undergoing chemotherapy. But some say the advantages aren’t worth the side effects: impaired judgment, diminished productivity and potential lung irritation.

Lab researchers have attempted to identify components of marijuana that best treat particular symptoms, but industry professionals admit that it’s not yet possible to buy weed specifically developed for certain health problems. Pharmaceutical companies, meanwhile, are developing synthetic cannabinoid medicines as an alternative to toking up. Nabilone, for example, can reduce nausea and vomiting for some people, O’Brien says.

4. “The THC brownies may be stronger than they appear.”

Shops compete on the strength of their product, says dispensary marketing consultant Bierman. Marijuana professionals are perpetually working to cultivate purer and better strains of the cannabis plant (marijuana is the dried leaves and flowers of the plant). As a result, experts and industry insiders say, medical marijuana sold legally in stores these days is far more potent than what was recreationally smoked in, say, the ’60s.

But marijuana’s federal outlaw status means that unlike traditional pharmaceuticals, it’s not subject to Food and Drug Administration oversight or dosage labeling requirements. Indeed, government officials in state health departments aren’t even allowed to handle marijuana. So the responsibility for testing and labeling products falls to the dispensaries. Bierman says most shops, some of which carry 25 different types of marijuana, test for levels of active ingredients like THC, along with mold and other contaminants, “so you know what you’re getting.”

Instead of milligrams, though, there are ratings on a 10-point scale, descriptors like “dank” (smelly and moist, suggesting high potency), and warnings like “not for amateurs.” Though physicians say people are unlikely to overdose on marijuana, some groups are advocating for a system that’ll help patients and doctors be sure of the right dose: “If someone goes to the wine store to purchase a bottle of wine, they can understand the alcohol content on the bottle,” says Dan Riffle, director of federal policies for the Marijuana Policy Project, a lobbying group. Patients should likewise be able to see what’s in their medical marijuana, he says.

The concept of dosage gets even more abstract when the marijuana is baked into a brownie or infused into other treats. At one West Los Angeles dispensary, for instance, a candy bar has about the same effect as a hard candy that’s only a fraction of the size. Plus, Bierman points out, THC can be five to 10 times more psychoactive when it’s ingested than when it’s smoked.

Medical marijuana continues to make crime headlines in states that have legalized it, and robberies can be particularly frequent. Industry analysts argue that it isn’t necessarily the marijuana that attracts criminals to the dispensaries, but the stacks of cash on hand: Banks won’t do business with dispensaries — since doing so could jeopardize their FDIC insurance — so the shops can’t process credit card transactions or open checking accounts. “They end up having a safe in the back with all this cash,” says Riffle.

Areas with a greater number of dispensaries, however, aren’t correlated with higher rates of crime, according to research by the University of California, Los Angeles. The study’s early results even suggest that dispensaries draw less crime than bars, though principal investigator Bridget Freisthler, a social welfare professor at UCLA, cautions that it’s too early in the project to tell for sure. The researchers are still investigating whether crime increases over time after a dispensary moves into a neighborhood. “There’s concern that the businesses themselves are going to be targets!

Thanks for the provided information. Nevertheless, I like to discuss such topics in a conversational tone. I think this is the right step towards the truth because you know the theme of marijuana is quite arguable nowadays.

Comment by harolda on August 14, 2013 at 11:30am
I DON'T KNOW HOW MARIJUANA USE MEDICAL OR RECREATIONAL WILL AFFECT SOME NEIGHBORHOODS BUT I DO KNOW THAT THEIR NO NONE PSYCHOPATH THAT DERIVED FROM THE USE OF THIS DRUG.