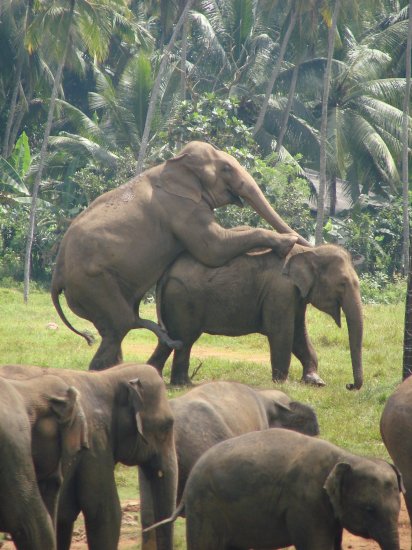 One of the hottest Jamaican pornographic material being circulated by DVD and on the Internet is a street dance held in a St Catherine community that has people having sex openly in front of other patrons.

The clip or DVD shows a couple having sex in the middle of the street. The dance, Go Go Jam, is held in Charlemont, St Catherine. The last dance is said to have been held in early December.

In the clip which is being circulated, the couple carries on in several sexual positions, and they are surrounded by the patrons who are either watching the sexual action or dancing to some of the latest songs. The music selector not only unleashes several hot songs but makes mention of at least one popular dance group that was said to be in the crowd.

But while to most persons this may seem to be a lewd and inappropriate act, the monthly dance has being going on for approximately two years and is well attended. The females involved in the act are said to be either exotic dancers or persons selected by the organisers.

So popular are these dances that, for the persons who missed out on the action, copies of the DVDs bearing the title are being sold in sections of Linstead and surrounding areas.

When THE STAR visited the St Catherine community recently, there were varied opinions from residents about the dance.

"When the film is from foreign everyone will buy it. However, if it is a local one then the problem start," said one resident, Marjorie.

Other persons agreed with her view, and pointed out that the dance did not bother them.

"It nuh badda mi and mi did go watch it about three weeks ago when it was on the front of the club. Nothing nuh wrong with it, a just a lickle outside thing," another female resident told THE STAR.

The reaction was, however, not the same from a businesswoman in the area.

"The whole thing is sad. The things that happen out there should be in the privacy of the bedroom," she said.

Head of the Linstead police, Inspector Michael Walker, said he was not aware of the event or its happenings, but promised to investigate.

YOU MUST BE 21 and OVER TO WATCH THIS CONTENT. I am putting up this video so people can see the facts of the story because without the VIDEO you would not believe it!


CLICK the PLAY button on VIDEO above and wait for it to LOAD!

Comment by shawna on July 5, 2011 at 10:47pm
this is too funny i had to show someone this cause they would not believe me

This must be a damn joke ...and to KING A****** Mr. Ralph Johnson, sir I hope when Papa God judge your deeds they don't include acts like this.

I'm really disappointed that Carribean fever put this full size video on. (a small sample would have been plenty-just to inform people what's going on in this world) And it is against the law to promote child pornography! I will forward VIDZ.COM to law enforcement as it appears to be riddled with Child pornography. I'm so pissed, children ought to be protected not exploited. Babylon burn. It's truly a war going on between Good and Evil. Devil stay away from our children! Let's all unite and arm us with our bibles, korans, etc.....God bless us all!

Comment by Taranee Jiles on December 26, 2010 at 4:20pm
This is very sad, what has the world come to? Like a bunch of empty souls. Whatever happened to values, morals and intimacy? Babylon burn!!! A lot of men are like dogs, they just lift up there legs to piss. No Pride or Class whatsoever.Pretty sad to see women now behaving the same way. God bless their souls. Again this is pretty sad, however I'm not gonna judge, who knows what happens to these females in their lifes to behave this way, only God knows.

Great video..at least she put on a condom..On the guy....All parties were happy that the sex act took place no one was complaining to this point..Great show...

Comment by archangel#1 on December 9, 2010 at 3:13pm
WOE TO YOU WHO TAKE BAD AND CALL IT GOOD JAMAICA JAMAICA GOD SHALL POUR OUT HIS WRATH UPON YOU REPENT AND TURN FROM SUCH EVIL THE HOLY THING YOU HAVE CORRUPTED YOU HAVE NO FEAR FOR GOD GOD HAS TURN HIS BACK ON YOU WOE WOE WOE TO YOU OH INHABITANTS OF JAMAICA YOUR WOUND SHALL BE INCURABLE WOE WOE WOE

Comment by Mike k on December 9, 2010 at 11:14am
Insightful commentary all, but I have to agree with the opinions that this should come as no surprise at all. It is simply the natural progression given the attitudes, lack of principle & morals fuelled by the zealous worship of material at all cost mentality that permeates the modern music/entertainment culture which adversely influences society in general. Our future and the positive progression of any species are predicated on the theory of betterment of self & community and the ability to learn from the past. "Those that fail to learn from history are doomed to repeat it".

Let’s face it and be honest with ourselves. There is something about this video that appeals to our most primal senses. In the privacy of our homes we can do whatever we want without scrutiny. It is natural for humans to be stimulated by sex. It is vital for the sustenance of our species, however what separates us from the animal species is the ability to employ judgment and consciousness of the implications of our actions and choices.

At the risk of sounding like an old fart, in my days we used to think of these kinds of brazen sexual behaviors as liberal European customs, nasty, irrelevant to our customs and tolerances. I would have never dreamt that African/west Indians would be involved in this. “Up, you mighty race”. Is not referring to your genitals its in reference to the awareness that you are descendents of a dynamic and regal ancestry lets conduct ourselves with more respect & regard for the sacrifices of our ancestors and the future of our children.

C’mon black people lets do better than this. “A people without the knowledge of their history are like a tree without roots”. (Marcus Garvey). It is evident and disconcerting that in discussions with my kids about music, I am observing what I consider to be a social regression. I remember in all the musical trends of my evolution, although you had an appreciation for the past you loved the present and thought there was an improvement and progression in the artistry and talent. My kids are acknowledging that the music of the past is superior to that of their generation.

This reminds me of the very prophetic lyric in one of my favourite songs by an English reggae band named Misty in roots. “The heathens they don’t praise jah in their dance, all they want is sex and vanity”. (Danchall Babylon – Misty in roots). Check it out.