Jahna Sabastian, the baby's mother of super producer Swizz Beatz hopped on Instagram to publicly scold his wife, Alicia Keys, for allowing their daughter to use social media, despite her objections - and Swizz is now responding to her claims. In a post Jahna said:

"Furthermore, this stepparent has violated my recent decision to temporarily restrict Nicole's access to some social media like TikTok for disciplinary purposes, because it was affecting her studies, and in order to get her more into reading books and learning about humanity through real life, instead of becoming a spoilt child only interested in material things and social media likes, also for protection as children are very vulnerable online…I have succeeded in that for a long time, but then after the last trip I received my child back, who was obsessed with social media, likes and followers, clothes and material things, after close communication with this stepparent. What kind of influence is that on my child?" Jahna wrote.

And Jahna is not happy about her daughter Nicole calling Alicia "mom" in Arabic either.

"The stepparent is not raising my child, in fact she even got in the way of things in the past, which I have been quiet about…At the same time as the iPhone appeared, the stepparent started having Nicole calling her 'Umi', which means 'Mother' in Arabic, even though I have stated multiple times throughout the years, that I do not agree with any kind of 'mom' name for another person… Nicole's brothers call my by my name, Jahna. All the other mothers are called by their names…If this stepparent was truly for women empowerment, caring for the sisters and equality, then she wouldn't separate her status from all of the other three women…"


She says she is not happy about the image being promoted and won't allow the r&b singer to steal her child.

"…this stepparent never responds to emails or phone calls herself, instead she complains to the family member(s) around to get them to attack, which is a very low and cowardly tactic…I am writing this to shed some light on a situation that has been ongoing behind the scenes while there is a fake idea of the 'blended family' that's promoted, using my child for publicity. In reality there is a total disrespect of another woman and motherhood going on…I am not interested in going on 'blended' vacations, I pay for and go on my own vacations all the time. I have moved on in regards to my personal life also…I will not allow her to steal my child."

Swizz Beatz later hopped onto social media to tell his baby mama to pipe down. 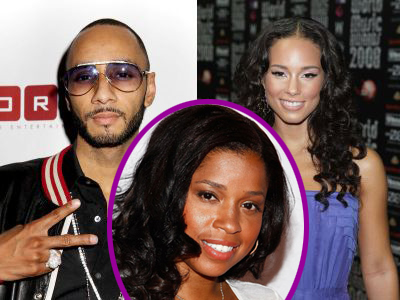 Don't call Alicia Keys a homewrecker. Because according to her, she's not.

Keys' husband, fellow musician Swizz Beatz, was still wed to R&B artist Mashonda when they began dating in 2009, prompting rumors about whether the singer was the reason his marriage was ending.

"We didn't start seeing each other until months after they had separated," Keys told Essence in its June issue, adding that she "was aware of all the false things that were being said about me."

Beatz, 32, and Mashonda, who have a young son together, finalized their divorce last May, just two months before he married Keys.

Keys was pregnant during their wedding – she gave birth to son Egypt in October – and Beatz has two other children from previous relationships.

The "Empire State of Mind" songstress admitted that Mashonda was none too pleased by her romance with Beatz and even said she received a letter accusing her of "destroying" their family.

"I was sure that if I engaged, it would become back-and-forth like some sick entertainment," she explained, adding it would have gone "against everything I believe and would have made things worse."

But "things are really good now" with Mashonda, Keys claimed.

Beatz "is very present in his children's lives," she told the magazine. "I wouldn't be able to love him otherwise."

Comment by vaughn mitchell on December 27, 2019 at 11:24am
His ex , has a point her daughter calling Alicia Keys, mom, is a no no. Tik Tok, is spy website, use by china, to spy on their citizens, young kids, should stay off social media, and giving her an iPhone, that brings trouble. The baby other have to understand her daughter knows who her biological mom is, but it seems Swizz, Alicia, are corrupting this child giving her an iphonem

Comment by JamRockLady on May 24, 2011 at 9:30am
You don`t start another relationship when you haven`t completely, 100%, dissolved your marriage legally.  Swiss is a male-whole.

Comment by Maria on May 23, 2011 at 3:54pm
I agree. Swizz and Mashaonda were having marital problem. If it was not Alicia it would have been someone else. SWizz and Alica became close when they were on tour. SHe did it right. They did not flaunt this in Mashinda face. They waited unit the very end when he was ready to fully walk. They should all get along for the childrens sake! People can still have civil relationships. It is what adults make of them.

@IGNY and Janice, both of you made some good points and had some great advice, also @kcrunchone, I beleive in the 3 parts to a story mantra.  Remember now, we are watching TMZ, and hearing comments from reporters gossip media analysis, we are not living in these people homes to see the real stories, and make our own judgment.  I like Alicia and Swizz is a great producer and seems to be a wonderful father, but, I wont lose any sleep over their, or Arnold and Marie's marital dramas.. LOL

Comment by kcrunchone on May 21, 2011 at 8:06pm
I am not privy of all the things that may have transpired to make the relationship sour. I do know that if you feel for someone and I mean really feel for someone then you try and make it work but you dont stay for children and you dont stay to save face. Staying will only make matters worse you hurt the child by him or her seeing a loveless and dead family, leaving him with no family values or the wrong attitude towards a man or woman. You have to realize that when it is time the same as a death it is just time and nothing can revive that. If and when a person or persons can not amicably sit and arrange family issues then there is no sense especially since the next step may possibly lead to someone being physical. People say that there are two sides to a story and that is a lie too there are three. his    hers     and     the truth, very often both hi and hers have twisted detail of the truth, but in the end I personally feel you must leave and staying only damages the relations with the other person and any child or children that may be involved.

@krunchone..... When a man is finished with a woman, there is nothing she can do to "MAKE" him stay with her.  If she does manage to keep him in the home with her (out of obligation), he well commence to making that home a "living hell".  He will not only be arguing with her at every chance he can get, but he will also start to fight with the children.

Now if there were not another woman waiting on the "sidelines" for him to make that transition out of the home complete, then he would more easily stay at home and make the best of things.  Alicia was waiting on the sidelines for him to make that final cut.  Most men are too weak to be by themselves and do some "personal growth" and so they set themselves up with another woman before they leave their current relationship.  Alicia is the "rebound" woman he used to break away from Mashonda....and he wasn't man enough to try and work things out.  Didn't they just have a baby not long before he left?  A mature man would have waited until he got divorced before he started a serious relationship with another woman.

to all the people who say she was foul please take this advice:
if you want your man/woman then keep him/her!! they is no such thing as a fake break up/separation.
i get annoyed when I hear people saying that she should have given them a chance to reconcile. Why? she did not break up a happy home they were already separated. if Mashonda still wanted him she should have done whatever she needed to do to keep his ass in her house. that is like thowing out your TV with the garbage then calling your neighbor a thief when it ends up in his living room.

if it reaches the curb it is anyones property.

we dont do our kids any favors by staying in an unhealthy relationship for their sake. they are sometimes doomed to repeat that mistake because they see dysfunction as being a normal/desireable thing.

you owe strangers nothing and should be under no obligation to deny yourself an attempt at happiness because they cant make up their mind if they want to be with someone or not. also sometimes being in 'that state of mind' is the only time we are honest with our selves and are who we are instead of who we think other people find cool.

personally if i hadnt already found happiness i would only draw the line at serious committed relationships/marraiges; if dude want to claim casual relationship or friends with benefits status then would feel no remorse about offering his 'girl' a chance at something more (not the same casual stuff).