RCA Music Group threw a surprise party for Jamie Foxx on the third floor of the new Armani store on Fifth Avenue last night. Foxx entered the store to what seemed like a genuine surprise on his part. The event was in honor of his multi-platinum selling album, "Intuition" and its hit record, "Blame It". "Blame It" features T-Pain and was No. 1 on the R&B charts for twelve full weeks. Now it's crossed over and is a Pop hit. "Intuition" was released just this past December and Jamie is currently working on an entirely new album for this upcoming December. Foxx is a Best Actor Oscar award winner currently filming and reading new scripts, which brings to mind another actor/music artist: 50 CENT, also currently filming and reading multiple scripts. Only thing left for 50 to make this two-of-a-kind is that Oscar. Foxx charmed the crowd comprised mostly of his label's staff and execs who catapulted his album to multi-platinum status with a hilarious tale of a time when he was fighting for musical recognition. It was during his days as a stand-out on the hit tv sketch-comedy series "In Living Color". He was playing a transvestite and wanted badly to get a demo to Teddy Riley, who was scheduled to be a guest that same night on the show. Foxx saw Teddy and bolted for him: "I ran toward him in full costune". When Riley noticed this football player-looking guy in make up and a dress running toward him Riley said he thought to himself "I feel a little uncomfortable right now." Jamie then mentioned that if anything were to have come of his singing career back then, he likely wouldn't have the twin film/music career success that he's now experiencing. "Instead" Foxx said, "Here I am". 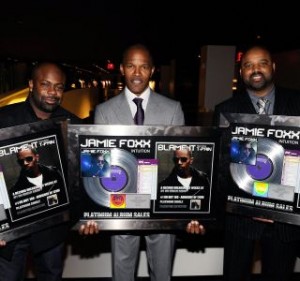 Comment by Lydia on July 24, 2009 at 3:24am
jamie fox has always had a great voice even from when he was on the tv shows.It's good to see him make it as a singer/actor