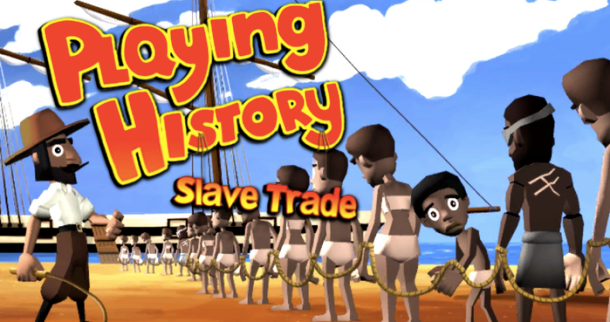 Ever wanted to relive what is was like for our ancestors during slavery? Of course not, we know the history all too well. But one Dutch company thinks people do, that’s why it’s making a video game about the slave trade.

History 2: Slave Trade targets gamers ages 8 to 14 and can be found on Steam Community, an online gaming site. Designed by the Dutch company, Serious Games Interactive, the game is said to give a true look at the African slave trade by using the narratives of people who worked on slave ships.

But Twitter isn’t having it. While the game has quietly lived in the shadows since 2013, Sunday night Black Twitter discovered it and discussed their outrage of the racist game.

Referred to as a ‘slave trade Tetris,’ users decide how to best stack Black bodies into a tight slave ship or be the eyes and ears of the captain by helping him make deals for slaves in Africa.

“Travel back in time to the 18th Century and witness the horrors of the trans-Atlantic slave trade first-hand,” reads the game’s description.

Despite the backlash, the Denmark-based company sees nothing wrong with the game, describing it as an educational tool. “Why play Playing History? To gain the opportunity to take part in history, within in a living breathing world. You will be able to learn about historic events that they cannot alter – instead, they witness how the historic events altered humanity as a whole. The learning process is autonomously conveyed throughout the story of the game as it progresses,” reads the Playing History site. Twitter isn’t buying it.

The company did not sit quiet while their historical game was bashed. Instead, the creator, Simon Egenfeldt, defended the game and the company is offering 25 percent off to try the Playing History 2: Slave Trade first-hand.

Meanwhile, the Dutch still believe dressing up in Black face is totally okay as Zwarte Piet (Black Pete) is a staple in their Christmas celebrations. I guess we can’t expect much racial sensitivity here

Comment by Suzan on September 5, 2015 at 4:25pm
I know it's frustrating ! But the powers that be would always portray any protest or disagreement we black people have, as insighting violence! But if you have any suggestions, please share. Peace

Comment by longandstrong69 on September 5, 2015 at 4:55am
Jews people won't sit on their ass and do nothing like black people,

Comment by Suzan on September 1, 2015 at 11:32pm
Omg l!! What's next the Lets Go Linching??!! You're absolutely right, they dare not have a game or anything derogatory about the Jews experience !!

Comment by Cameron on August 31, 2015 at 8:53pm
Why dont they make a holocaust video. Lets see whete5 that goes